It’s that time of year again – it’s time for War Games. This Saturday, Grand Sports Arena in Chicago, Illinois will be the stage for GCW The Art of War 2022. Game Changer Wrestling dabbled with the historic War Games concept last year, holding a show that included the iconic steel cage enclosing two wrestling rings. It was here where Team MDK, led by Nick Gage, took on the company’s then-most villainous stable, The 44OH. This year, five teams will face off for the right to be declared GCW Tag Team Champions. Here’s what to know heading into GCW The Art of War 2022. 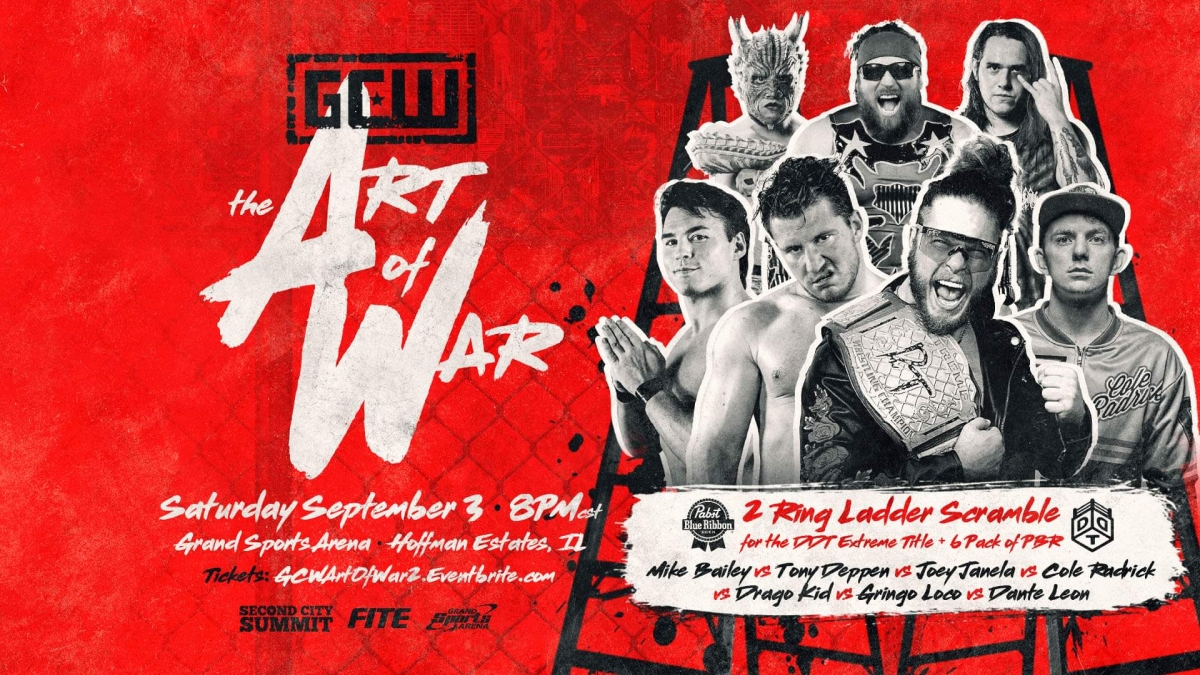 It must be read to be believed – at GCW The Art of War 2022, DDT Pro-Wrestling’s Extreme Championship will be on the line. Moreover, it will be contested in a 2-Ring Ladder Scramble where the winner not only claims the title but a 6-pack of Pabst Blue Ribbon beer. The current DDT Extreme titleholder is Joey Janela, who captured the gold last month at Korakuen Hall. While “The Bad Boy” intends to continue defending the gold in Japan, his defenses appear to be going stateside as well. The Extreme Championship is built on the foundation of hardcore wrestling and the propensity to take competition to the extreme, which makes the 2-Ring Ladder Scramble a perfect fit. This Saturday, Janela must contend with “Speedball” Mike Bailey, Tony Deppen, Drago Kid, Gringo Loco, Dante Leon, and GCW Extreme Champion Cole Radrick. Will Radrick end the night holding 2 Extreme titles? Can Janela leave Chicago still DDT Extreme Champion? Perhaps another contender will claim the gold and a few cold ones in the process. See how this multi-man contest unfolds at The Art of War 2022. 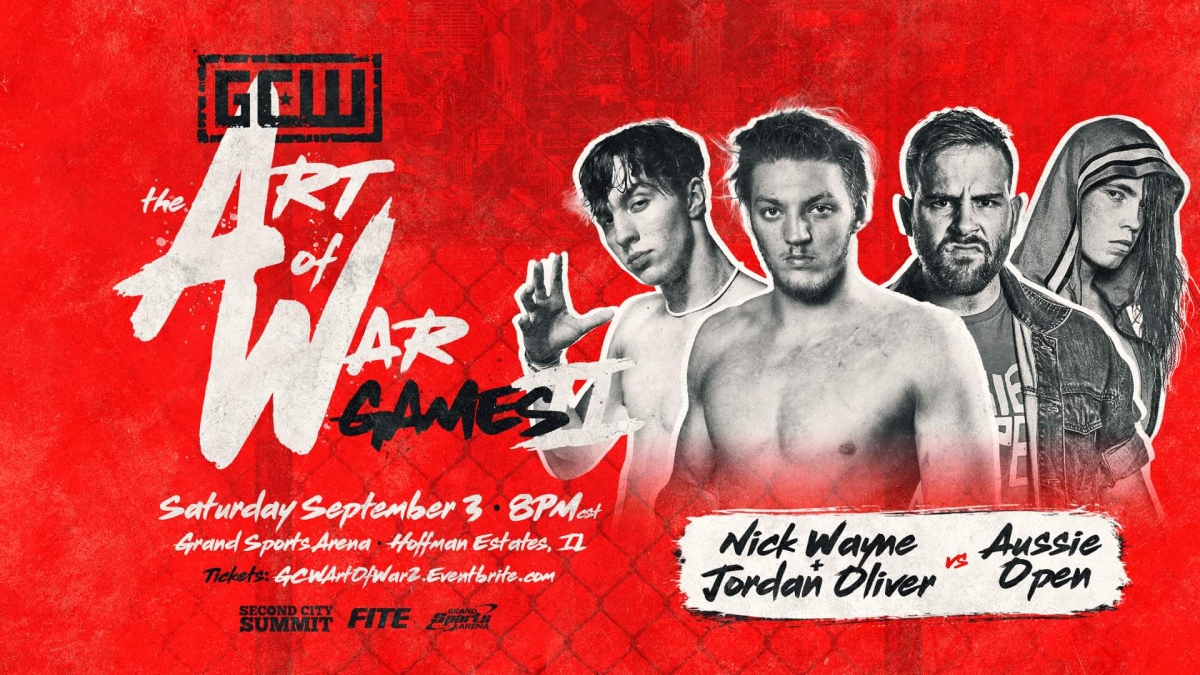 Outside of the iconic War Games match, this show will feature Aussie Open in action. The duo of Kyle Fletcher and Mark Davis is part of the larger United Empire stable, led by Will Ospreay. Together, Fletcher and Davis have become one of the top tag teams on the independent scene, not to mention locations such as their home promotion, New Japan Pro-Wrestling. They are the first-ever NJPW STRONG Openweight Tag Team Champions, having captured the titles in a match against Yuya Uemura and Christopher Daniels. This isn’t to say that Aussie Open is a team short on accomplishments, however. Since 2017, they captured tag team gold in Westside Xtreme Wrestling, RevPro, PROGRESS Wrestling, and elsewhere. However, most wrestling fans may recognize Aussie Open for the duo’s sporadic appearances on All Elite Wrestling programming.

Alongside Ospreay, Fletcher and Davis have made their mark in AEW, even challenging Death Triangle and The Elite en route to the newly unveiled AEW World Trios Championship. Despite their best efforts, Aussie Open alongside Ospreay fell to the latter team. Heading into GCW The Art of War 2022, Aussie Open must keep their focus on the young yet promising duo of Nick Wayne and Jordan Oliver. Wayne and Oliver boast combined agility and high-flying maneuvers, making them among the most challenging wrestlers to keep pace with. Simply put, Aussie Open will not have an easy evening come Saturday. Expect this to be one of the show-stealing bouts outside of the main event, which leads us to…

The War Games Match is complete, and the GCW Tag Team Titles are on the line!

Last year, it was all about settling a score; this year, the name of the name is prestige. GCW The Art of War 2022 will be headlined by the namesake match of this show, featuring 5 teams competing for the GCW Tag Team Championship. The current titleholders are Jay and Mark, The Briscoes, one of the most seasoned tag teams in the world today. The Briscoes are currently in their third reign as GCW tag team titleholders, recently recapturing the belts against Los Macizos at GCW Homecoming 2022 Part 1. Beyond this, “Dem Boys” are also recognized as the record-setting 12x ROH World Tag Team Champions, not to mention former tag team titleholders in Combat Zone Wrestling, IMPACT Wrestling, New Japan Pro-Wrestling, and elsewhere. Simply put, The Briscoes are the team to beat. However, this Saturday, their GCW Tag Team Championship may be in jeopardy.

Also included in this War Games match are BUSSY, comprised of Allie Katch and EFFY, Los Macizos, the duo of Ciclope and Miedo Extremo, Mance Warner and Matthew Justice representing Second Gear Crew, and the unlikely twosome of Alex Colon and John Wayne Murdoch. This is a promising lineup, especially when considering that all the competitors involved, sans Colon, have held the GCW Tag Team Championship at one point or another. On paper, it’s likely that any team involved in War Games can walk away with the gold. While the other teams challenging for the gold have been on the same page, the tension between Colon and Murdoch renders them the wildcard.

The War Games concept has been in existence since 1987, the concept in question often associated with World Championship Wrestling and the National Wrestling Alliance. However, most recently, War Games enjoyed a revitalization under the NXT banner, featuring many modern wrestlers battling in the reimagined two rings surrounded by a steel cage. On the independent level, Game Changer Wrestling has kept War Games alive in a different way, incorporating more ultraviolent wrestling elements. Expect no different at GCW The Art of War 2022.

Stay tuned to the Last Word on Pro Wrestling for more on this and other stories from around the world of wrestling, as they develop. You can always count on LWOPW to be on top of the major news in the wrestling world, as well as to provide you with analysis, previews, videos, interviews, and editorials on the wrestling world. GCW The Art of War 2022 is set to air Saturday at 8 PM EST on FITE. Tickets are also available via Eventbrite.