The number of cups may have increased, but it’s the level of excitement that may be taken to a next level this Friday. Once again, Game Changer Wrestling and Black Label Pro are partnering to bring independent wrestling of the highest caliber with GCW x BLP: 4 Cups Stuffed. Whether you’re a fan of one or both organizations, based on the announced card, there is certain to be something that you’ll enjoy. Last year’s 3 Cups Stuffed event saw such happenings as “Filthy” Tom Lawlor besting Alex Shelley for the BLP Midwest Championship and G-Raver and Jimmy Lloyd taking each other to the limit in a deathmatch. What will fans see this year? Here’s what to know heading into 4 Cups Stuffed. 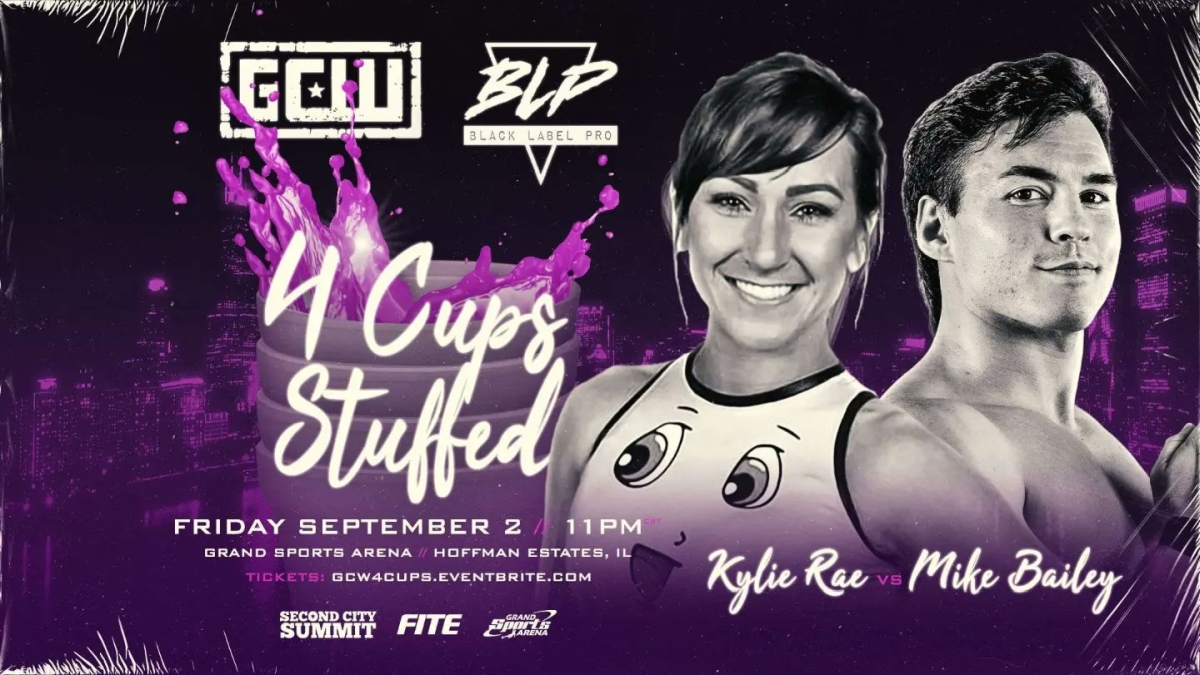 Scheduled for GCW x BLP: 4 Cups Stuffed is a singles encounter between “Smiley” Kylie Rae and “Speedball” Mike Bailey. This is a special encounter, as it marks the first time these two have shared a ring with each other. Though not as active on the independent scene as she was in years past, Rae can still be seen working matches at various Freelance Wrestling events. She also last appeared for BLP this past June on Night 1 of Tyler’s Day Off, losing in the main event to Trish Adora. In terms of her accomplishments in the promotion, Rae is a former Midwest Champion, boasting a 217-day reign. At 4 Cups Stuffed, she takes on Mike Bailey, who’s not only a Game Changer Wrestling regular but can be seen on IMPACT Wrestling as its current X-Division Champion, having won the title in June at Slammiversary. Known for his aerial maneuvers, “Speedball” brings a healthy degree of martial arts offense to his arsenal. It will be interesting to see how these two in-ring styles mesh come Friday. 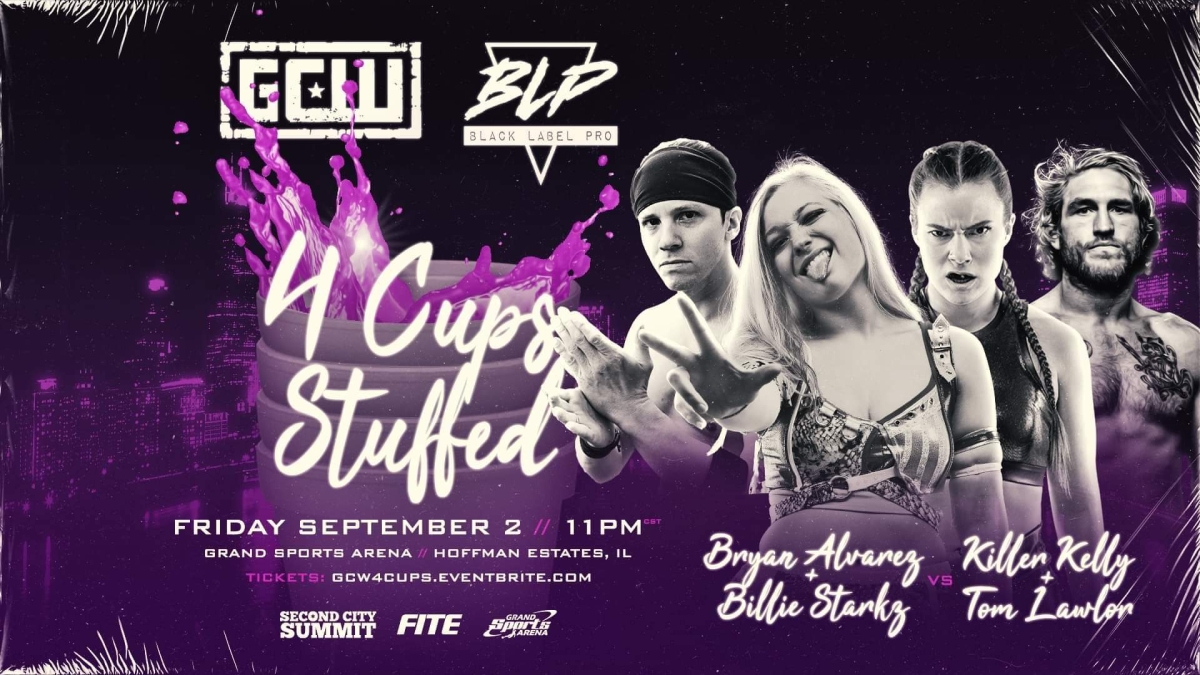 It Came From Filthy Four Daily

This Friday, at GCW x BLP: 4 Cups Stuffed, cohosts will collide in mixed tag team action. On the August 8 edition of Filthy Four Daily, which is part of the larger Wrestling Observer network, Bryan Alvarez and BLP Midwest Champion Tom Lawlor butted heads. For context, in this year’s G1 Climax for New Japan Pro-Wrestling, Lawlor picked up a victory over Toru Yano. On Filthy Four Daily, Alvarez took credit for said victory, which greatly offended Lawlor. This prompted Lawlor to challenge Alvarez to a tag team match, with Lawlor teaming with Debbie Malenko and Alvarez working alongside Billie Starkz. However, Malenko reached out, saying she’d be unavailable for 4 Cups Stuffed. At the end of their show, Lawlor announced his new tag team partner: Killer Kelly. Alvarez’s involvement in this match is interesting as he hasn’t competed since 2019, last teaming with Lawlor in a losing effort against Thomas Santell and Nick Gage for Beyond Wrestling. Furthermore, this marks the first time that Alvarez and Lawlor will compete against each other. How will this mixed tag team encounter unfold? 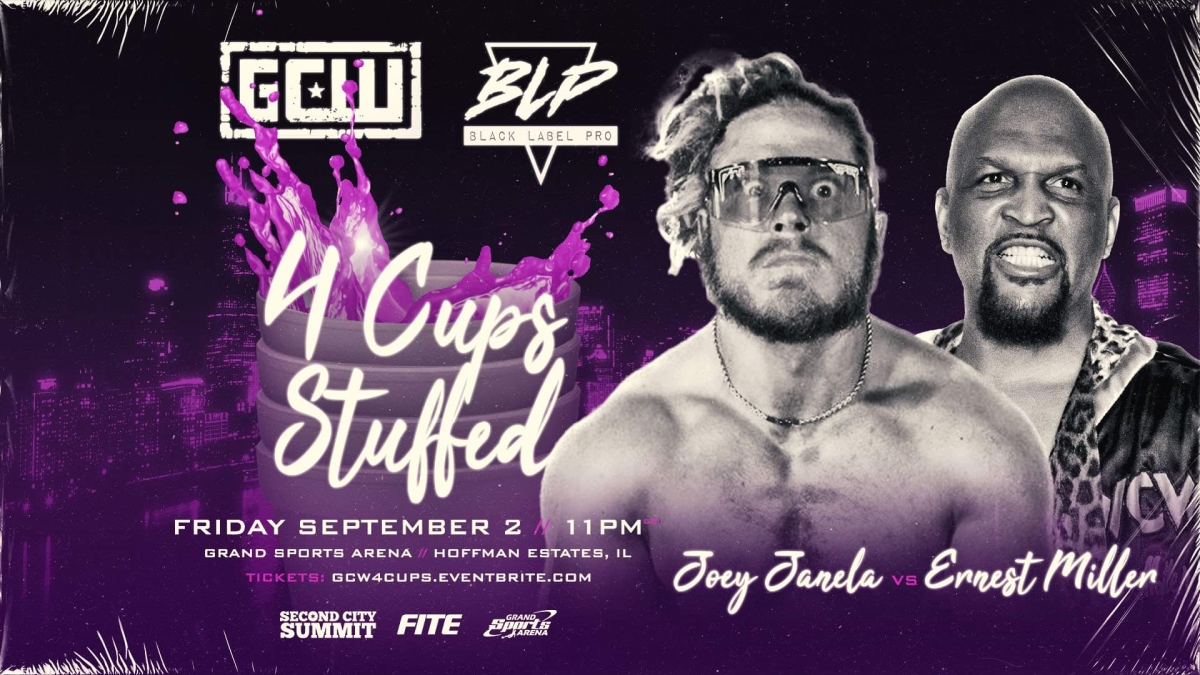 One of the most surprising announcements made for GCW x BLP: 4 Cups Stuffed was the Game Changer Wrestling debut of Ernest “The Cat” Miller. The self-proclaimed “Greatest” is perhaps best known for his time spent in World Championship Wrestling, where he served as both an in-ring competitor and on-screen Commissioner of the company. A WCW Power Plant trainee, Miller was an All-American linebacker and experienced kickboxer before he turned his sights to professional wrestling. In fact, his kickboxing experience would greatly influence his wrestling style. Following WCW’s closure, in 2002, Miller saw a brief stint in World Wrestling Entertainment as both a wrestler and commentator. He’s made sporadic appearances on the independent scene over the past few years, but at 4 Cups Stuffed, he wrestles his most notable match in quite some time against “The Bad Boy” Joey Janela. Given Janela’s eclectic array of opponents in GCW and elsewhere, working a bout against Miller may not be as farfetched as it appears. For those that have yet to see “The Cat” in action, keep your eyes peeled this Friday. 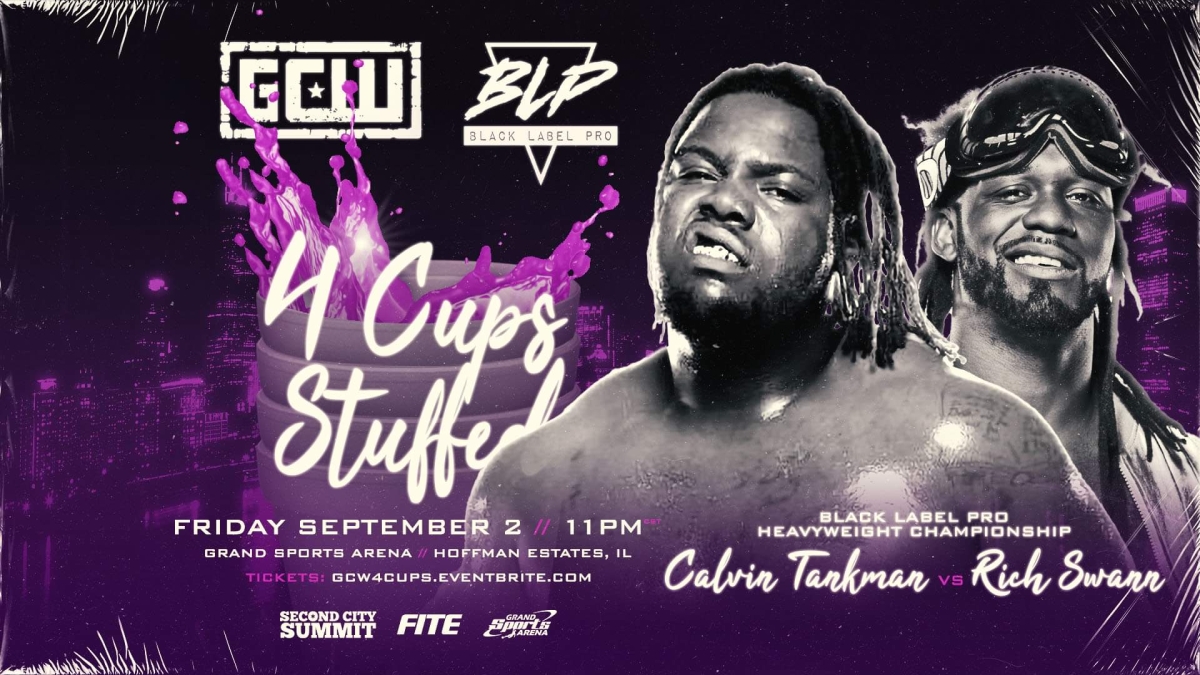 4 Cups Stuffed will also see the Black Label Pro Heavyweight Championship contested. The current reigning champion, “Heavyweight Hustle” Calvin Tankman, is set to defend the gold against “The Outlandish” Rich Swann. Furthermore, this marks the first time that these two competitors have shared the ring with each other, making the match all the more must-see. Currently in his second reign with the belt, Tankman captured the BLP Heavyweight Championship this past July in a Monster’s Ball Match that also featured Levi Everett, Joshua Bishop, and then-titleholder PCO. This doesn’t even begin to touch on Tankman’s status as champion across other promotions, DEADLOCK Pro-Wrestling and Major League Wrestling included. Meanwhile, Swann enters this match as one of the top names to enter IMPACT Wrestling in recent memory, capturing the promotion’s X-Division, World, and most recently, Digital Media titles between 2019 and 2022. Can Swann add the BLP Heavyweight Championship to his resume, or will it be Tankman leaving Grand Sports Arena still the champion?

Stay tuned to the Last Word on Pro Wrestling for more on this and other stories from around the world of wrestling, as they develop. You can always count on LWOPW to be on top of the major news in the wrestling world, as well as to provide you with analysis, previews, videos, interviews, and editorials on the wrestling world. GCW x BLP: 4 Cups Stuffed is set to air Friday at 11 PM EST on FITE. Tickets are also available via Eventbrite.

Rivalry Rewind: Young Bucks vs. Lucha Bros : A Perfect Tale of Brothers Against Brothers
Participants for Casino Ladder Match at AEW All Out Revealed