Professional wrestling is built on the stories told in and out of the ring. These often come in the form of rivalries, pitting opposing forces against one another in pursuit of bragging rights, championships, and successes. This edition of Rivalry Rewind sees friendship and feats of athleticism evolve into an on-screen bitter grudge as we take a look at the feud between Rey Mysterio and Eddie Guerrero.

Often regarded as two of the greatest wrestlers of Mexican origin, Rey Mysterio and the late Eddie Guerrero carved different legacies from one another. Whereas Mysterio is known for his colorful presentation and fast-paced wrestling style, the latter of which would inspire future generations of wrestlers, Guerrero’s charisma, athleticism, and ability to play to the emotions of crowds worldwide are the stuff of legends. Over the years, whether as allies or rivals, Mysterio and Guerrero became linked to each other. From their humble beginnings to the proverbial big time, let’s take a look back at the rivalry between “The Man of Mystery” and the grappler who made the mantra “Lie, Cheat, and Steal” nothing short of memorable.

Rey Mysterio vs. Eddie Guerrero: A Look Back

While Eddie Guerrero made his in-ring debut in 1986, Mysterio wrestled his first professional match in 1989. The two wrestled a handful of times in Mexico throughout the early 1990s, specifically for Lucha Libre AAA Worldwide. These multi-person matches would serve as the framework for their eventual move to World Championship Wrestling. It was here where they became the cornerstones of the company’s cruiserweight division, which was designed to showcase a faster, more athletic style of wrestling that involved everything from hurricanranas to high-flying maneuvers. The cruiserweight division was instrumental to WCW’s success during the 90s and Mysterio and Guerrero were in the thick of things.

In 1997, Rey Mysterio Jr. and Eddie Guerrero entered their first on-screen feud. By this point, Guerrero was the WCW Cruiserweight Champion, having won the title from Chris Jericho at Fall Brawl in September of that year. The aforementioned feud between Mysterio and Guerrero culminated at Halloween Havoc in October, the two facing off in a Title vs. Mask Match. Essentially, if Mysterio lost, he would have to unmask, revealing his face to the public.

To say that this Halloween Havoc encounter is memorable would be an understatement. Not only did it feature the aforementioned athleticism that the cruiserweight wrestlers were known for, but it was packed with emotion, especially with Guerrero ripping at Mysterio’s mask numerous times. Ultimately, Mysterio used his wits to win, reversing a top rope maneuver by Guerrero to secure his second Cruiserweight Championship. Mysterio would go on to hold the title in the company a record-setting 6 times. Sadly, Mysterio’s second reign only lasted 15 days, as he dropped the title back to Guerrero on the November 10, 1997 edition of WCW Monday Nitro. 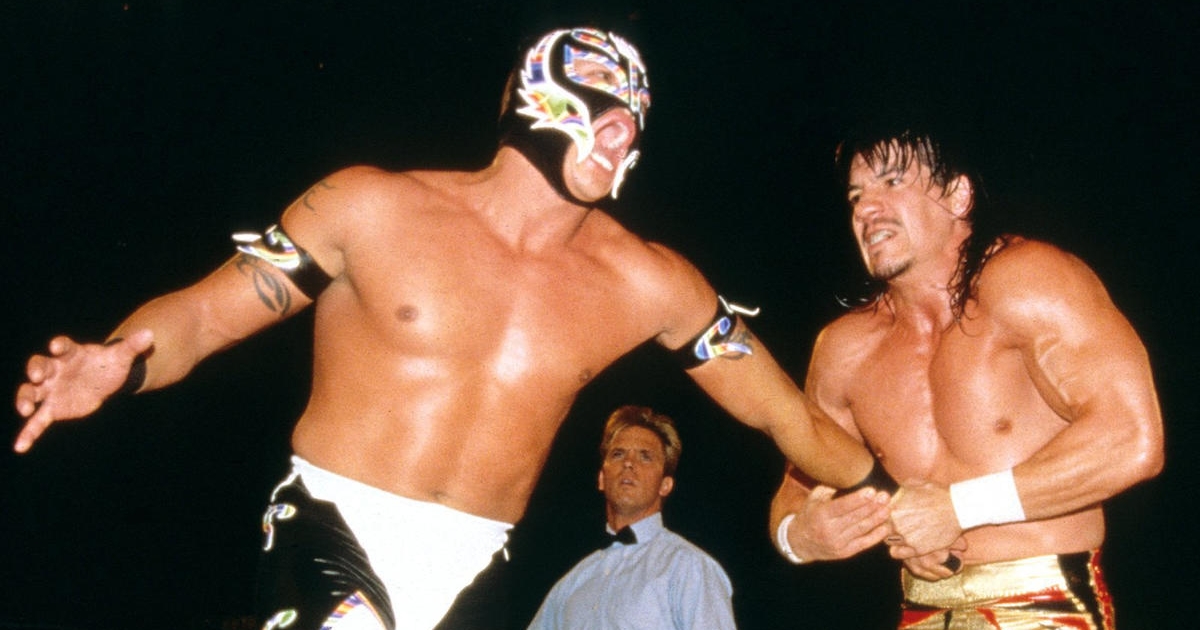 The Halloween Havoc match marked the apex of Mysterio and Guerrero’s feud in WCW. Granted, they would lock horns in storyline the following year after Guerrero formed the Latino World Order alongside Mexican wrestlers including El Dandy, La Parka, and Psychosis. Guerrero pursued Mysterio in an attempt to convince him to join his faction as well. Despite his reluctance, Mysterio was forced to join when he lost to Guerrero on the November 16, 1998 edition of Nitro. An undercard story with promise was cut short, however, when Guerrero was involved in a car accident on New Year’s Day.

For the remainder of their time in WCW, Mysterio and Guerrero served as allies, specifically as original members of The Filthy Animals. They feuded with such names as the Insane Clown Posse, Perry Saturn, and Dean Malenko. The following January, however, Guerrero left the group when he was granted his release from WCW, making his way to the World Wrestling Federation. Meanwhile, Mysterio remained with the company until its final days, even becoming recognized as one-half of the final WCW Cruiserweight Tag Team Champions alongside Billy Kidman. Mysterio wouldn’t sign with WWE until June of 2002.

Rey Mysterio made his WWE debut the following July, quickly establishing himself as one of the top stars on SmackDown. This was notable as he became one of the most vital competitors on the blue brand; alongside five other wrestlers, including Eddie Guerrero, he was part of the group known by wrestling fans as “The SmackDown 6.” Such matches as Mysterio and Edge versus Los Guerreros, the duo of Eddie and Chavo Guerrero, helped establish SmackDown as the more wrestling-centric show compared to WWE’s flagship program, Raw. Fans would have to wait until early 2005 for Mysterio and Eddie to become more closely tied together on TV.

In February of that year, at No Way Out, Rey Mysterio and Eddie Guerrero challenged The Basham Brothers for the WWE Tag Team Championship. Mysterio and Guerrero made the most of this moment, capturing the titles; it’s worth noting that this was Guerrero’s last title victory before his passing later that year. While the two were willing and defending champions, there was an element of internal competition in their team as well. Case and point, instead of putting the WWF Tag Team Championship on the line at WrestleMania 21, they faced each other in the opening match. Mysterio won what many fans regarded as a friendly exhibition between teammates.

However, matters took a turn for the worse for the duo, especially as Mysterio collected more seemingly friendly singles victories over Guerrero. Mere weeks after WrestleMania, they lost the tag team titles to Joey Mercury and Johnny Nitro, collectively known as MNM. Though the former champions received a rematch the following week, MNM retained after Guerrero abandoned Mysterio, leaving the latter to fend for himself. On the May 5, 2005 edition of SmackDown, Mysterio was blindsided by MNM and Chavo Guerrero. Eddie rushed the ring, seemingly coming to the aid of his friend. However, it was Eddie that did the most damage, assaulting Mysterio, sending him into the steel post, and even suplexing him on the steps.

With their feud from their early days reignited, the two met at Judgment Day later that month. Mysterio won the match, though it was by DQ, as Guerrero used a steel chair to assault his former partner. However, it wasn’t until June when matters became personal. Guerrero threatened to reveal a secret about Mysterio and his son, Dominik. This led to a match between Mysterio and Guerrero at The Great American Bash in July, the stipulation being that if Mysterio lost, Guerrero would reveal the secret in question. Despite Mysterio winning, Guerrero told the world, on the following episode of SmackDown, that he – not Mysterio – was Dominik’s real father. The fact that this was told while young Dominik was in the ring with Rey made the matter that much more emotional. 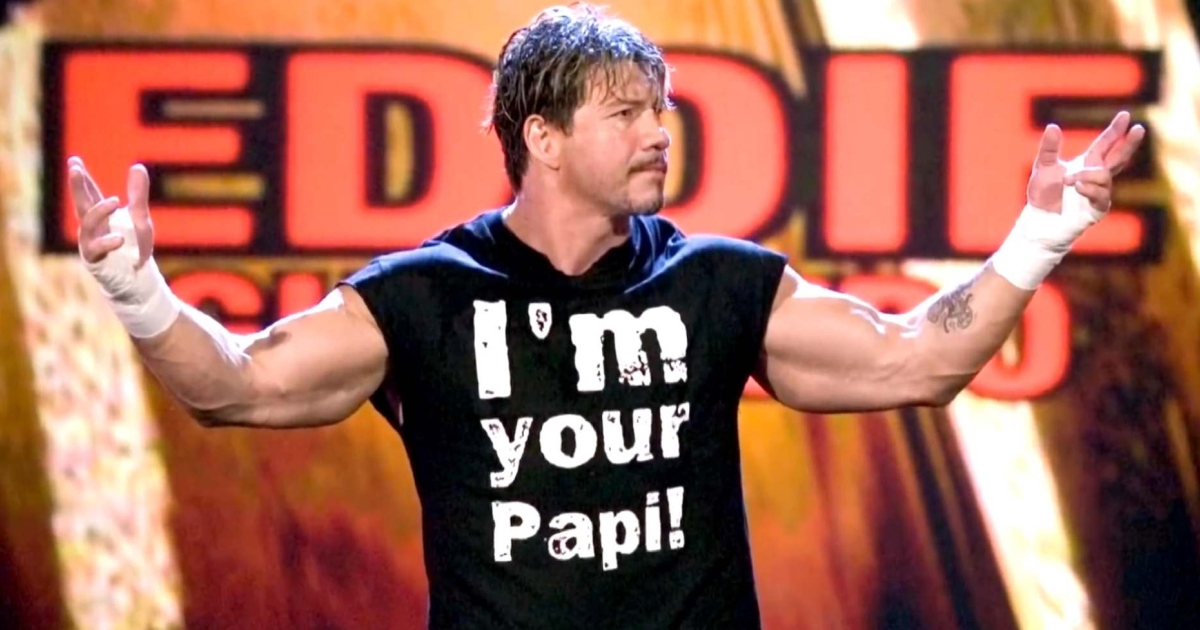 Further details were unveiled by Guerrero during a series of segments known as “Eddie’s Bedtime Stories,” which saw him recount those very details. Essentially, while he and his real-life Vickie were separated, Guerrero had a child with another woman out of wedlock. Guerrero expressed he wanted nothing to do with the child, allowing Mysterio and his wife to adopt it, no adoption papers being signed or finalized. The truth was kept a secret during the next 8 years of Dominik’s life. The next bombshell was dropped during Chapter 2, which involved Mysterio being served official custody papers; in short, Guerrero was Dominik’s legal father and he wanted Mysterio to turn the child over to him.

Though this part of Mysterio and Guerrero’s legacy transformed into a legal battle, it wouldn’t end with involvement from attorneys or children and family services representatives. Instead, Mysterio challenged Guerrero to one last match: at SummerSlam, the two would face each other in a Ladder Match with Dominik’s custody papers suspended above the ring. All the while, Guerrero’s own family, Vickie and his daughters included, found themselves in the midst of the chaos.

A Happy Ending for the Mysterios

After having his family dragged through legal recourse and nigh insurmountable drama, Rey Mysterio faced Eddie Guerrero at SummerSlam in a Ladder Match, custody for Dominik on the line. This emotional battle saw Dominik watch from ringside as his biological father and the father he knew wrestle in one of the most violent match types. Mysterio used his trademark quickness and high-flying style to keep his opponent on the defensive, whereas Guerrero focused on punishing his opponent any way he could. Though the match itself proved haphazard at times, the fans in attendance stayed glued during every moment.

Toward the end, Guerrero seemed to have the match won. That was, until Vickie interfered, toppling the ladder to prevent her husband from retrieving the custody papers. This allowed a weakened Mysterio to scale the same ladder, unhooking the ladder that contained those very papers. Mysterio celebrated with his son and wife, not to mention knocked out Guerrero with the briefcase for an extra measure of revenge. The official end to this feud took place on the September 9 edition of SmackDown, where Guerrero bested Mysterio in a Steel Cage Match. 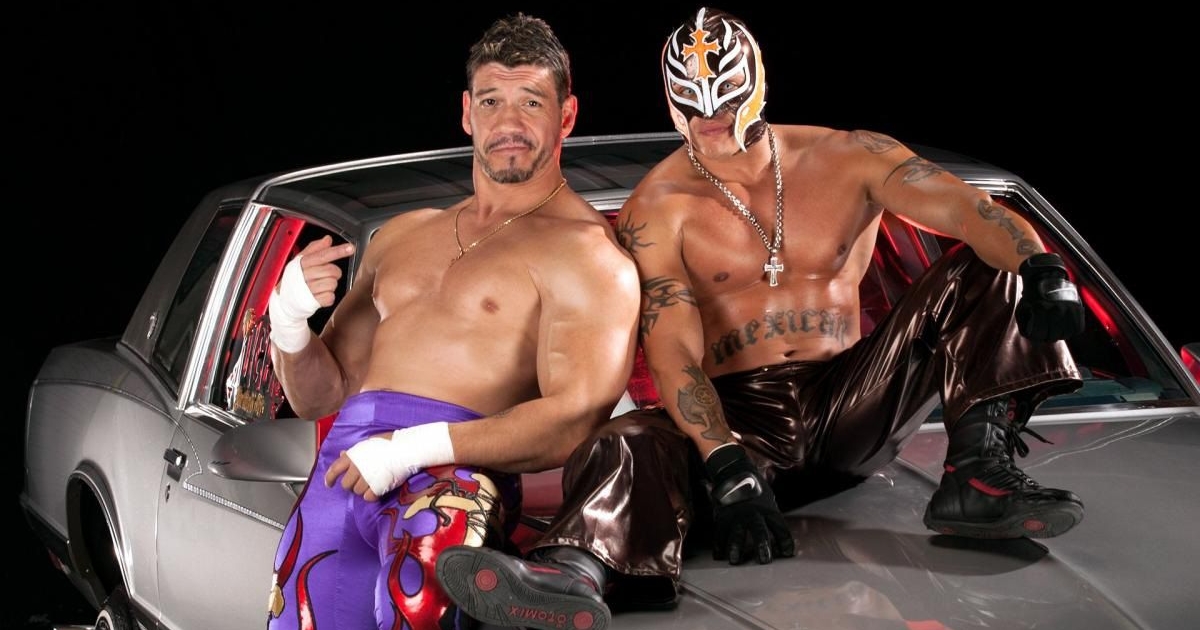 From career-defining encounters to on-screen legal battles, the rivalry between Rey Mysterio and Eddie Guerrero left few stones unturned. Outside of a few multi-person tag team matches on TV, Mysterio and Guerrero’s time together concluded following the aforementioned episode of SmackDown. On November 13, 2005, Guerrero passed away; the following evening, WWE Superstars from both Raw and SmackDown competed in a show held in honor of the fallen wrestler. Mysterio, who shared an emotional speech for his real-life friend prior in the evening, faced Shawn Michaels in a winning effort.

In the months that followed, Mysterio competed in memory of Guerrero. In the 2006 Royal Rumble match, Mysterio was one of the first competitors to enter the match alongside Triple H. Lasting over an hour, Mysterio eliminated 6 competitors, finally disposing of Randy Orton to win the entire match. Mysterio went on to win the World Heavyweight Championship at WrestleMania 22 in a Triple Threat encounter featuring Orton and Kurt Angle. To this day, Mysterio often pays tribute to Guerrero, and given the respect and love they shared for each other, it couldn’t be more fitting.