It only takes a spark to create a fire, and on June 27, 2002, perhaps the most notable spark in modern professional wrestling took place. It can’t be disputed that John Cena is one of the most popular stars to come out of professional wrestling. At times divisive, his success from humble beginnings speaks for itself. However, back in the summer of 2002, few expected him to emerge as the main event star and WWE flagbearer he would become. Twenty years later, we take a look back at the WWE debut of John Cena.

20 Years Ago: The Debut of John Cena

“Who Has Enough Ruthless Aggression?”

On June 24, 2002, Monday Night Raw featured Vince McMahon in the middle of the ring with several WWE Superstars standing on the ring apron. McMahon wished to instill vigor in his current roster, to help them become bigger stars. McMahon believed that the key ingredient needed to achieve this was, in his words, “ruthless aggression.” After all, to him, it was this very trait that helped him accomplish major feats, including buying his biggest competition in World Championship Wrestling. While this message spread throughout WWE’s main roster, its reach proved to be even wider. “Ruthless aggression,” which seemed like a throwaway term, defined an entire era in WWE.

Around the same time, a developing WWE star was chomping at the bit to make an impression. Enter John Cena, who had been training at Ohio Valley Wrestling, the company’s developmental territory at the time. He wrestled under the name of The Prototype, capturing the OVW Southern Tag Team Championship and, later on, the OVW Heavyweight Championship. Cena would make his main roster debut in the summer of 2002. Furthermore, he became part of an elite group of graduates, also known as the OVW 4, alongside Batista, Randy Orton, and Brock Lensar. 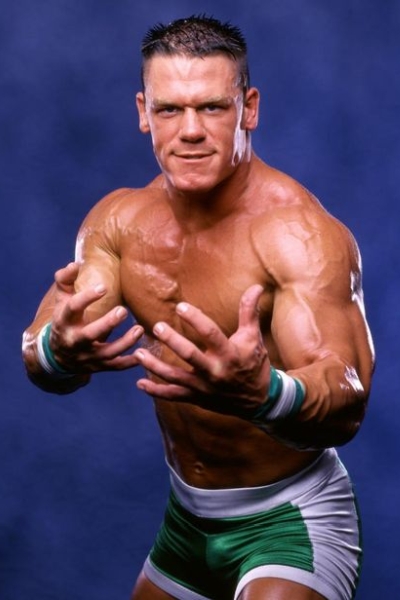 On the June 27, 2002 edition of SmackDown, Kurt Angle made his way to the ring. The Olympic Gold Medalist showed a renewed edge, stripping himself of his comedic wig and headgear which he wore after having his head shaved by Edge. Angle was embarrassed no more; in fact, he was driven to show everyone what “ruthless aggression” was about. To this end, he issued an open challenge to anyone he’s never wrestled before, claiming it would make them a sensation just like him. Angle was ready to compete, no matter who stepped through the curtain.

That individual was John Cena, sporting red and black trunks in addition to a determined disposition. Confused, Angle asked who this man was, to which Cena replied with his own name. Angle’s confusion turned to bemusement as he asked, “what is the one quality that you possess that makes you think that you can walk out here and come into the ring and face the very best in the business?” With intensity to his voice, Cena growled, “ruthless aggression,” following up with a left hand across Angle’s face. The young upstart was driven and it was evident that Angle wasn’t ready for such an explosive new opponent.

From the get-go, John Cena took the fight to Kurt Angle, tackling him to the mat and following up with a series of mounted punches. For a moment, the fight spilled to the outside, but even when it returned to the ring, the young upstart kept on the former WWE world champion. Cena displayed impressive power and explosive offense, to the point where viewers wondered if they were primed for an upset. This was especially true as Cena countered his opponent’s patented Ankle Lock, a maneuver that submitted many opponents, “Stone Cold” Steve Austin and “Hollywood” Hulk Hogan included, in years past. Eventually, Angle cut off Cena’s momentum with multiple German suplexes.

Angle slowed the pace of the match from there, not only keeping Cena in the corner but holding the newcomer down with a front facelock. Slowly, but surely, Cena powered through, lifting and dropping Angle over his head. Cena soon hit a running forearm followed by a spinebuster for a nearfall. Angle attempted an Angle Slam, but Cena countered with a DDT, though it was only good for another nearfall. Throughout various close pinfall attempts, Cena’s persistence remained at a high level, the crowd in attendance believing in each attempt. Ultimately, it was the veteran wiles of Angle that won out, as a surprise double chickenwing pinfall earned him the victory.

Post-match, Cena approached Angle, extending his arm for a handshake. With a look of disbelief, Angle made his way out of the ring, leaving Cena standing in the center of the ring. Though he came out on the losing end of this encounter, Cena earned credibility early into his WWE career, holding his own against an elite competitor in Angle. Later in the evening, Cena was seen receiving respect from various WWE Superstars, chief among them then-WWE Champion The Undertaker. A simple handshake from “The Deadman” only further legitimized the young star on his first night.

“We Haven’t Heard the Last of John Cena.”

Between a competitive match against Kurt Angle in his WWE debut and respect from The Undertaker, one would think John Cena was destined for greatness. Granted, Cena followed up with programs against Chris Jericho and Los Guerreros, which were optimistic signs. However, as the months progressed, his status in the company diminished. Eventually, Cena found himself relegated to WWE Velocity and lower-level SmackDown matches. According to Cena himself, he was on the verge of being cut from WWE, his “ruthless aggression” gimmick of sorts running its course. It was, of all circumstances, a playful freestyle rap battle on a tour bus that saved his career. This brought life to Cena’s “Doctor of Thuganomics” character and, moreover, a WWE career spanning two decades.

As history has shown, following his debut, John Cena went on to become one of the most decorated WWE Superstars in history. Five United States Championship reigns, 4 tag team title wins, Royal Rumble and Money in the Bank victories, not to mention 16 world titles – these are just a few of the accomplishments that the man associated with “Hustle, Loyalty, and Respect” earned throughout his career. Cena’s ascent to the top may not have been what fans expected when he made his debut 20 years ago, but the results can’t be argued. Suffice to say, the young man that sported multicolored trunks and a flat top mohawk has come a long way.