The professional wrestling career of John Cena spans over two decades. With 2 Royal Rumble victories, 16 world title reigns, and multiple WrestleMania main events to his name, just to name a few accomplishments, he is regarded as one of the cornerstones of WWE. While statistics such as these matter, what’s truly important in wrestling is the collection of stories told by competitors. With such a legendary career, it should go without saying that Cena’s been part of more than his fair share of rivalries. Over the years, “The Face That Runs the Place” has competed against many of the best to step between the ropes. In light of the news of his impending return on June 27, to celebrate 20 years in WWE, we take a look back at John Cena’s best feuds.

When discussing John Cena’s best feuds, as well as the future multi-time world champion’s humble beginnings, attention must be drawn to Kurt Angle. By June 2002, Angle had established himself as one of the most successful competitors in WWE. On that year’s June 27 episode of SmackDown, he issued an open challenge, which was answered by a young Cena. When Angle questioned what Cena thought he had to step up to him, Cena responded with an intense “ruthless aggression,” before laying out the Olympic Gold Medalist. Angle may have won the match that followed, but in his debut showing, Cena impressed.

Over the next few years, Angle and Cena would lock horns multiple times, the latter gaining more experience along the way. They would even compete for the WWE Championship when Cena held the title. Furthermore, this feud motivated the titleholder to refine his offense, adding a signature move in the STFU. Given how instrumental Angle was to Cena’s career, especially early on, many fans believed it to be puzzling when Angle wrestled his final WWE match against Baron Corbin, not Cena. Nonetheless, this ranks among John Cena’s best feuds ever.

Speaking of instrumental rivalries for John Cena, one cannot overlook John Bradshaw Layfield. With JBL presented as a loudmouth tycoon with money to flaunt and Cena, at the time, being a boastful yet fan-favorite hip-hop enthusiast, their personalities couldn’t have been starker when their feud sparked in 2005. JBL and his Cabinet didn’t make things easy for the young “Doctor of Thuganomics,” costing him his United States Championship for starters. However, Cena wasn’t one to back down en route to JBL’s WWE Championship. Cena wanted the top prize, which he would claim by defeating JBL at WrestleMania 21 in April of that year.

What followed this victory was a drastic cosmetic change to the WWE Championship, as the previous title design was replaced by the divisive “spinner” WWE title. Furthermore, Cena’s first world title reign was an extensive one, as he held it for 280 days. During this period, not only did he overcome JBL in a rematch but he held his own against such names as Kane, Kurt Angle, and Shawn Michaels. Cena may have been able to reach the top of the proverbial mountain without his rivalry with JBL, but its importance to both men’s careers can’t be denied.

From a historic cash-in to a family home break-in, Edge did more to impact the psyche of John Cena than perhaps any other name in WWE. In fact, this is perhaps the most influential of John Cena’s rivalries in WWE. When Edge won the first-ever Money in the Bank contest at WrestleMania 21 – the same event Cena captured his first WWE world title – fans speculated as to when “The Rated R Superstar” would redeem his opportunity. Those same fans waited roughly 9 months for an answer; enter New Year’s Revolution, which was capped off by an Elimination Chamber match for the WWE Championship. A bloodied, weary Cena retained his title, but his night wasn’t over yet.

In shocking fashion, Edge cashed in on the weakened champion, prying the title from him in a matter of moments. This long-standing rivalry was filled with a host of other memorable moments, including Edge’s “live celebration” with Lita and even “The Rated R Superstar” costing Cena a major world title match at ECW One Night Stand 2. As Edge became more unhinged, Cena’s resolve strengthened. Whenever Edge and Cena crossed paths, tensions ran high, even if there was no gold to be won. This saga stands as one of John Cena’s best feuds and understandably so. 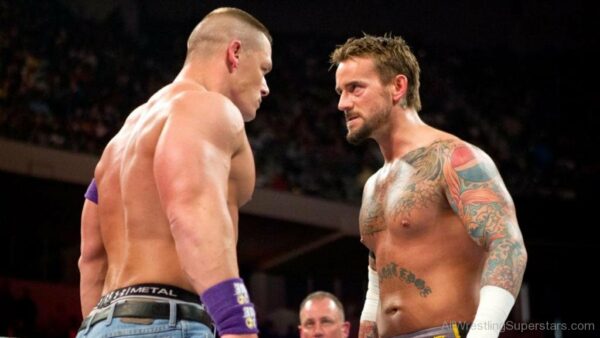 While they feuded prior to this, it was CM Punk and John Cena’s rivalry in the summer of 2011 that is most fondly remembered. Around this period, Cena was the established face of WWE, loyal to both the company and its fans around the world. The anti-establishment Punk was the perfect foil, especially since he claimed he was on his way out of the company following Money in the Bank that July. Punk promised to not leave empty-handed, endeavoring to defeat Cena for the WWE Championship and leave with arguably the greatest prize in wrestling. “The Summer of Punk” was a major story that year and Cena played a vital role in it.

This isn’t to say that they haven’t crossed paths since then. From championship unification matches to heel turns, Cena and Punk played different roles in each other’s burgeoning stories. Personality and presentation-wise, they couldn’t be any more different. However, they shared the commonality of work ethic, leading WWE at different points in their own ways. Given Punk’s current status in All Elite Wrestling, it’s unlikely that this rivalry will be revisited one final time. However, history is irrefutable and it can’t be refuted that this stands among John Cena’s best feuds in WWE.

Before January 2016, this rivalry was said to be impossible. The idea of the “face” of WWE taking on the “face” of Total Nonstop Action Wrestling, later to be known as IMPACT Wrestling, seemed like a pipedream. However, when Styles officially signed with the Vince McMahon-owned company, a number of match possibilities opened. Chief among said possibilities was Cena; while he was winding down his full-time in-ring career, Cena’s work ethic remained as strong as ever. This was evident when, later that year, the two would lock horns for the first time. What followed was a series of matches showcasing chemistry between two veterans with admittedly vastly unique in-ring styles.

More than any other factor, John Cena’s feud with AJ Styles was based on the quality of matches put on by both men. Even when the WWE World Championship wasn’t on the line, it was apparent that they had their proverbial working shoes on when it came time for them to wrestle each other. Furthermore, these matches elevated Styles’ status in WWE as a key player while adding more memorable bouts to the tapestry of Cena’s career. In terms of sheer wrestling, Cena’s feud with “The Phenomenal One” is difficult to beat.