Is it an energized National Wrestling Alliance event or nothing short of a vanity project? In any event, this Saturday evening, the National Wrestling Alliance showcases NWA Alwayz Ready. Set to take place from the Knoxville Convention Center in Knoxville, Tennessee, this event will be held in honor of the reigning NWA Worlds Heavyweight Champion, Matt Cardona. Furthermore, it will feature Cardona’s entrance music as the show’s theme song, not to mention Cardona’s brand and likeness being prevalent throughout. As the self-proclaimed “Deathmatch King” put it, not even Harley Race or Ric Flair had pay-per-views named after them. Whether you’re attending live or planning to watch from home, here’s what to expect. 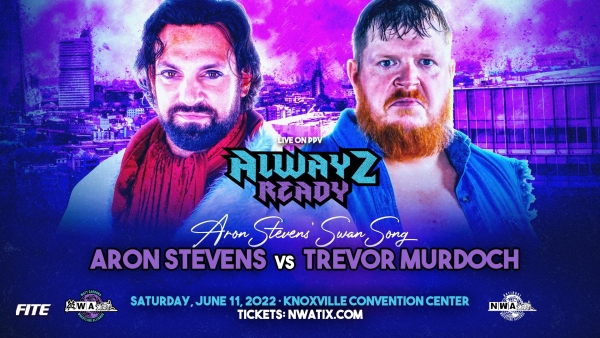 The Swan Song of Aron Stevens

In what’s being billed as “Aron Stevens’ Swan Song,” Aron Stevens will take on Trevor Murdoch at NWA Alwayz Ready. The former NWA World Tag Team Champion took to Instagram to expand on this, saying that this match, “not only marks the finale of an unparalleled wrestling career but the dawn of a new age.” Furthermore, he claimed his presence in professional wrestling has been a “blessing to fans,” with the industry being better because he was in it. On the surface, this bout has been positioned as Stevens’ retirement match, though the language on social media elicits doubt. The sheer mystery behind this “Swan Song” makes it a must-see bout this Saturday.

If this is indeed the end of Stevens’ wrestling career, he has accomplished a considerable amount. Though primarily a National Wrestling Alliance star, for over two decades, he’s competed in organizations including Chaotic Wrestling, IMPACT Wrestling, and most notably, WWE. It was in the latter where his character work came to life, as “The Intellectual Savior of the Masses” Damien Sandow, the cult favorite Damien Mizdow, and more. The accomplishments to his name include the Raw Tag Team Championship, in addition to NWA’s National Heavyweight and World Tag Team titles. Stevens takes on former NWA Worlds Heavyweight Champion Trevor Murdoch at Alwayz Ready; who will emerge victorious in this match steeped in mystery? 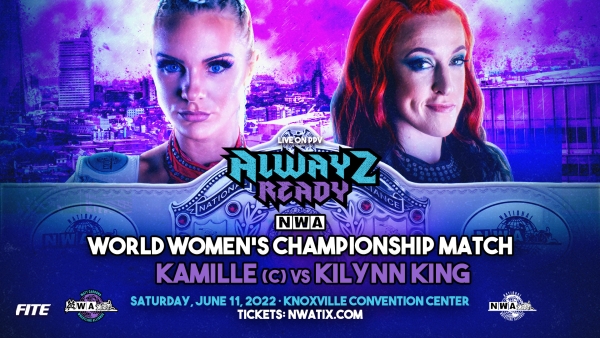 KiLynn King Goes for The Burke

Making her fourteenth NWA World Women’s Championship defense, Kamille will face KiLynn King at Alwayz Ready. “The Brickhouse” has held “The Burke” for over a year, making her the longest-reigning NWA women’s titleholder since 2019 when Jazz held it for 948 days. Whether Kamille can touch this accomplishment remains to be seen, though her work speaks for itself. One may consider her overconfident, but it’s difficult to fault her when looking at the results she’s produced. Chelsea Green, “Legit” Leyla Hirsch, and Melina are just a few names Kamille successfully defended her title against. This Saturday, she defends the title yet again, this time against a foe she’s familiar with in King.

For those unfamiliar, KiLynn King challenged Kamille for the NWA World Women’s Championship this past December at Coastal Championship Wrestling’s Industrial Evolution event. King put forth a solid effort, but the Team 3D Academy graduate was unable to pry the title from the champion’s grasp. Now, six months later, King has her rematch and it’s one that’s been months in the making. This past March, on NWA Powerrr, King bested Green and Jennacide in a #1 contender match, punching her ticket to NWA Alwayz Ready in the process. For the challenger, this match is an opportunity for redemption; for the champion, it’s another obstacle standing in her way of remaining atop the NWA women’s division.

“I don't care if I have to drive, walk or crawl. I don't know what's going to happen, but the Champ will be there,” @TheMattCardona said on the 6/1 broadcast of @BustedOpenRadio.

Please see the official statement on Cardona’s injury ahead of the #AlwayzReady PPV & stay tuned: pic.twitter.com/2jIb2eC51v

For the NWA Worlds Heavyweight Champion, the event named after him is up in the air. At Game Changer Wrestling’s Downward Spiral event, Matt Cardona faced Blake Christian. During the course of the match, Cardona suffered a torn bicep. While he finished the match, he would take to Twitter days later to announce both the injury in question and the fact it would require surgery. Cardona was slated to compete in the main event of NWA Alwayz Ready, defending “The Ten Pounds of Gold” against “The National Treasure” Nick Aldis. However, given the status of his injury, the main question in question is effectively off the table. Does this necessarily mean that the champion will no-show his own event, however?

Earlier this month, the NWA issued a statement regarding Cardona’s involvement in Alwayz Ready. On Busted Open Radio, Cardona proclaimed, “I don’t care if I have to drive, walk or crawl. I don’t know what’s going to happen, but the Champ will be there.” In what capacity Cardona will be at the show, however, is anyone’s guess. Will he intend to defend his title, injury and all? Perhaps he’ll be situated at commentary, calling the action from the opening bout to the final match and doubling down on his presence throughout the show. Learn more when the event airs this Saturday.

Stay tuned to the Last Word on Pro Wrestling for more on this and other stories from around the world of wrestling, as they develop. You can always count on LWOPW to be on top of the major news in the wrestling world, as well as to provide you with analysis, previews, videos, interviews, and editorials on the wrestling world. NWA Alwayz Ready will air live on June 11 at 8 PM EDT on FITE. Tickets can be purchased via NWATIX.com.