From the late 2000s to the mid-2010s, few wrestlers were as synonymous with Ring of Honor as Kevin Steen. The Marieville, Quebec-born powerhouse possessed a penchant for punishment as palpable as his foul attitude. Despite being a villain for the majority of his time in ROH, the company’s passionate fan base respected his in-ring ability and microphone savvy. What may surprise those unfamiliar with his ROH work is that, unlike other alumni such as Jay Briscoe, Adam Cole, and Jay Lethal, Steen only held the company’s top prize once. However, it was a reign he made the most of. On this day, 10 years ago, Kevin Steen captured the ROH World Championship at Border Wars.

Setting the Stage for the Match to Come

For context as to how Kevin Steen’s ROH world title reign came to be, one must turn back the proverbial clock to December 18, 2010. On this night, ROH held its signature Final Battle event, the main event pitting fierce rivals Steen and El Generico against each other. To say that this rivalry was heated would be an understatement, stemming from Final Battle 2009, where Steen attacked Generico following their tag team loss to The Young Bucks. Roughly one year later, the former allies faced off at Final Battle 2010 and the stakes couldn’t have been higher. In this Fight Without Honor contest, Generico’s mask was pitted against Steen’s ROH career. By the end of the night, viewers would either see one man reveal his face or the other man step away from the company. In a fight that lasted over a half-hour, Generico overcame Steen, resulting in the latter’s departure from ROH, at least for a time.

In the months that followed, Steve Corino and Jimmy Jacobs vouched for Steen, wishing to bring him back into the fold. Meanwhile, Steen, who expressed interest in redeeming himself, was none too cordial to ROH management. This was especially true with regard to Jim Cornette, the company’s Executive Producer. What was especially interesting was that while Steen was portrayed as the villain, he was cheered by the vast majority of ROH fans, becoming something of a hero to the fans that ended up booing Cornette. Throw in a dash of viral marketing, as evidenced by such cases as Steen hacking ROH’s digital presence, and it was evident that the Quebec-born brawler was unwilling to work within the system.

After months of Steen wreaking havoc, both online and in-person at ROH events, he was finally given the opportunity he craved. At Final Battle 2011, on December 23 of that year, Steen would face Steve Corino; if Steen won, he’d be reinstated. In this No Disqualification contest, with Jacobs as the guest referee, Steen emerged victorious. The fact that Cornette was watching from ringside made “Wrestling’s Worst Nightmare’s” victory all the sweeter. However, his work wasn’t done quite yet. Following said victory, Steen laid out not only Jacobs but Generico, ultimately focusing on the ROH World Champion, Davey Richards. Kevin Steen was back and the ROH world title was in his sights.

Starting in January of 2012, Kevin Steen went through a path of dominance in Ring of Honor. From Kenny King to Adam Cole to Eddie Edwards and beyond, “Wrestling’s Worst Nightmare” went on an incredible winning streak. Not only was he driven to capture world championship gold, as mentioned earlier, but he was just as determined to hold ROH hostage. Steen’s opportunity would come at ROH Border Wars, which took place in Toronto, Ontario, Canada on May 12, 2012. The ROH World Champion, the Othello, Washington-born Davey Richards, was set to defend against Kevin Steen, who was entering the Ted Reeve Arena as something of a Canadian hero. Needless to say, a victory in his home country would be nothing short of satisfying.

However, this match didn’t come to fruition without hesitation. To be more specific, Jim Cornette was initially against the idea, believing Steen didn’t deserve a title match after all the trouble he caused. Meanwhile, as a fighting champion, “The American Wolf” was itching for this very match. While Richards was passionate about defending his title, Cornette believed this was nothing more than a ploy by Steen to throw ROH into further disarray. Though it took time, the ROH Executive Producer relented, scheduling Kevin Steen versus Davey Richards for the ROH World Championship at Border Wars.

Kevin Steen Versus Davey Richards for the ROH World Championship

Early in the match, the crowd was firmly behind Kevin Steen, “Next World Champ” chants breaking through. Steen attempted to end the match early with a package piledriver, only for Davey Richards to escape. From there, the two exchanged a series of strikes before the fight spilled to the outside. Richards took the fight to Steen, taking time to mouth off to a few fans in attendance. Jimmy Jacobs had accompanied Steen to the ring, and with Richards momentarily distracted by “The Zombie Princess,” Steen was able to turn the match back in his favor. All the while, the fans in attendance cheered for their home country hero, wanting to see him win the ROH World Championship as much as he did.

From there, the two fought on the ring apron, Richards executing an exploder suplex on said ring apron to Steen. Back in the ring, Richards continued the assault, despite unsavory chants being directed toward him. Richards also focused on Steen’s legs, wanting to make the self-proclaimed “Mr. Wrestling” give up. Back on the outside, Steen avoided a running apron kick from Richards, who inadvertently struck Jacobs instead. Steen took advantage of this, planting the ROH World Champion with two powerbombs on the ring apron. Steen rolled Richards back in the ring, executing a running cannonball in the corner. Despite these heavy hits delivered by the challenger, the champion remained in the match. “This is Awesome” chants followed from the crowd that greatly admired the efforts of both men.

After blocking a flying senton from Steen with his knees, Richards executed a German suplex followed by a massive lariat for a near fall. The two would exchange strikes, Steen getting the better of said exchange with a clothesline of his own. The two traded forearms, which ended with Steen hitting a pumphandle neckbreaker. Steen proceeded to taunt Richards, stealing his opponent’s mouthpiece before using it as his own. Steen attempted the package piledriver, but Richards powered out of it, only to be met with a pop-up powerbomb followed by a sharpshooter from Steen. Richards quickly made it to the ropes, though the damage to the knees of the challenger was evident. This didn’t go unnoticed by “The American Wolf,” who focused his offense on Steen’s legs.

This match seemed to reach its conclusion when Richards executed his DR Driver, but it was only good for a near fall. Richards kept his attack on a groggy Steen, who defiantly spat in the champion’s face. Steen followed up with a series of slaps, a F-Cinq, and a top rope moonsault. Even still, it was a struggle for Steen to hit the package piledriver due to the damage to his knee. Richards hit a series of low kicks on the fallen champion, who refused to stay down for long. Steen caught Richards’s foot for an ankle lock, but the champion quickly reversed it into one of his own. Through sheer will, it seemed, Steen managed to reverse the hold into a sharpshooter, though Richards quickly regained control with another ankle lock.

Steen attempted to climb the turnbuckle pads to escape, removing the middle one in the process. From there, Steen reversed the ankle lock, sending Richards into the exposed turnbuckle. One sleeper suplex and a package piledriver later and Kevin Steens pinned Davey Richards, becoming the first Canadian to win the ROH World Championship. Post-match, Steve Corino joined Steen and Jacobs in the ring. The three men embraced in the ring, forming the stable that became known as Suffering, Chaos, Ugliness, and Mayhem, otherwise known as S.C.U.M. The story of this group, however, is one for another time. 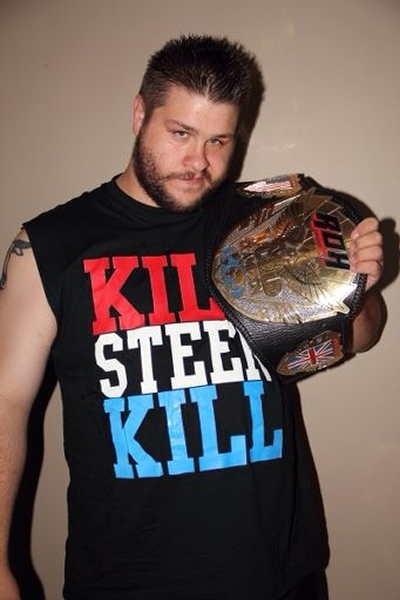 As mentioned earlier, Kevin Steen only held the ROH World Championship on a single occasion. However, with a reign that lasted 328 days, “Wrestling’s Worst Nightmare” would see to it that his time on top of the promotion was meaningful. Steen held the ROH world title from May 2012 to April 2013, retaining the gold on 16 occasions, though one of these was due to a No Contest ruling against Jay Lethal in October of 2012. Nonetheless, Steen tested his mettle against a variety of opponents. Such names include, but aren’t limited to, Eddie Edwards, Cedric Alexander, Roderick Strong, Eddie Kingston, and El Generico.

Steen’s ROH World Championship reign came to an end on April 5, 2013, at Supercard of Honor VII, where he lost to Jay Briscoe. Not long after, Steen was excommunicated from S.C.U.M., feuding with his former faction. He also entered a brief feud with Michael Bennett, not to mention challenged for the ROH World Championship, albeit unsuccessfully, against then-champion Adam Cole. By July of 2014, Steen departed ROH; the following August, it was announced that he had signed with WWE, where he was given his current ring name of Kevin Owens.

Kevin Steen’s quest for the ROH World Championship can best be described as that of a man on a mission. He was driven to take Ring of Honor in his hands, shaking the foundation and upsetting the establishment in the process. “Wrestling’s Worst Nightmare” lived up to his nickname, capturing the company’s top prize and further establishing himself as one of the biggest names in North American wrestling prior to his eventual signing with WWE. Whether Steen’s ROH world title reign ranks among the greatest is a topic of discussion all its own, but it’s a topic worth discussing at extensive length.

To see where you can watch ROH on TV or see the latest episode of ROH TV click here. For all things ROH, check out Honor Club. or their YouTube channel for WOH Wednesday and ROH Week by Week.