Game Changer Wrestling returns to The Showboat in Atlantic City, New Jersey this weekend for GCW In Too Deep. The company hasn’t been in this venue since February when they held Don’t Tell Me What to Do. This Showboat return looks to be a promising one, featuring a Bloodsport-style encounter between Chris Dickinson and Biff Busick, Joey Janela in action, and much more. Tickets can be purchased online, but if you’re unable to attend the show in person, the action will be aired live on FITE. Here’s what to know before the action unfolds this Saturday.

GCW In Too Deep – Full Card 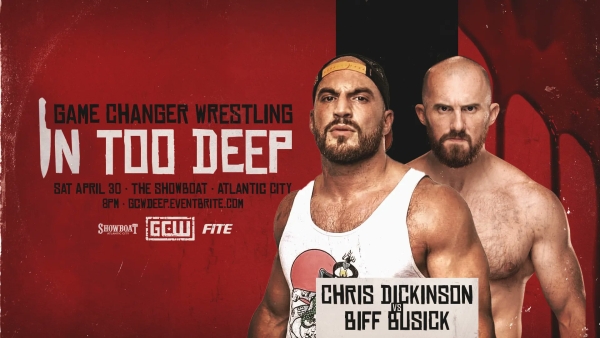 Bloodsport Competitors Meet at The Showboat

In one of the featured matches of GCW In Too Deep, “The Dirty Daddy” Chris Dickinson goes toe to toe with “The Star Destroyer,” Biff Busick. One of the commonalities Dickinson and Busick share is that they were competitors in the recent Josh Barnett’s Bloodsport 8 event during WrestleMania Week. They competed in different matches, though, with Busick falling to All Elite Wrestling star Jon Moxley and Dickinson picking up a major victory over New Japan Pro-Wrestling veteran Minoru Suzuki. Losses, victories, and all, Dickinson and Busick are two wrestlers without fear. However, Bloodsport is far from the experience that Dickinson and Busick share. In fact, their history dates back to the mid-2010s.

As far back as 2014, Dickinson and Busick shared the ring on multiple occasions, working for promotions including Combat Zone Wrestling. It was in CZW where some of their most important battles unfolded. Case and point, in October of that year, Busick defended the CZW World Heavyweight Championship against Dickinson at Tangled Web 7. Their most recent meeting took place in 2018 during, of all circumstances, a WrestleMania Axxess event. It was here where Dickinson and then-tag team partner Jaka successfully defended the EVOLVE Tag Team Championship against Busick, then known as Oney Lorcan, and Danny Burch. It’s been over 4 years, but now, Chris Dickinson and Biff Busick will share the ring again. Watch this fight unfold on Saturday night. 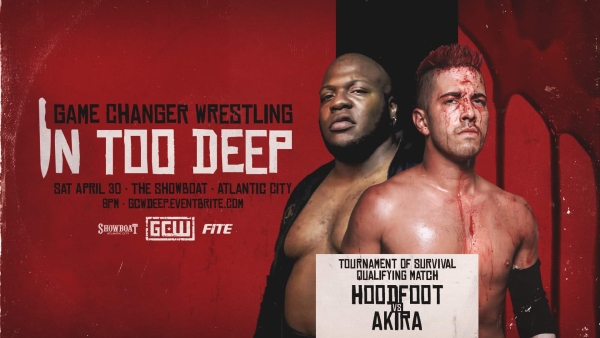 Hoodfoot and AKIRA Contend for Tournament of Surival

Game Changer Wrestling has historically held the Tournament of Survival during the spring and summer months of each year. 2022 will be no different, before before the tournament in question takes place, several wrestlers will take on one another in qualifying matches. One of the first qualifying bouts announced will pit Hoodfoot against AKIRA, and to say that this promises to be a brutal affair would be an understatement. There’s no denying the propensity for deathmatch wrestling that both men possess, utilizing anything and everything to secure victory. It’s important to note, though, that this isn’t their first singles encounter.

In March of 2021, Hoodfoot and AKIRA squared off at the PPW UWFi Rules Contenders Series. In the opening match, under UWFi rules, Hoodfoot successfully defended the PPW Heavy Hitters Championship against AKIRA. More than one year later, they’ll share the ring once more in singles action, possessing significantly more experience to boot. From multi-man to one-on-one deathmatches, Hoodfoot has earned the respect of the GCW faithful and it will be difficult to root against him. The same can be said for AKIRA, as “The Death Samurai’s” various explots on the independent scene has made him a name to keep an eye on. Who will win at GCW In Too Deep, advancing to this year’s Tournament of Survival? 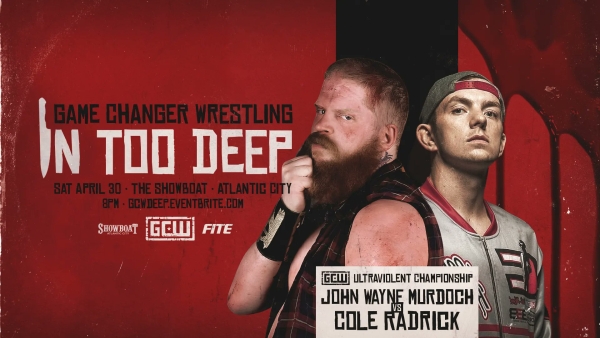 The New Champion Defends His Gold

Among the GCW stalwarts to have had the most eventful WrestleMania weeks is John Wayne Murdoch. On Night 1 of Joey Janela’s Spring Break 6, “The Duke of Hardcore” challenged Alex Colon for the GCW Ultraviolent Championship. This main event encounter was nothing short of brutal, as one would expect from the fighting styles of both men. Murdoch took matters to the extreme, which would serve him well as he left Fair Park with his first Ultraviolent title. Murdoch isn’t a stranger to gold in the promotion, having previously won the GCW World Tag Team Championship alongside Reed Bentley in 2017. At GCW In Too Deep, Murdoch makes his first title defense against another wrestler who’s far from shy about pushing the envelope.

“Wildheart” Cole Radrick is another individual with championship gold in his possession. Consider the fact that he is the current reigning Unsanctioned Pro Heavyweight Champion, having captured the gold back in August. Since then, he’s made several successful title defenses against names such as Bryan Keith, Danhausen, and most recently, “Speedball” Mike Bailey. In terms of Game Changer Wrestling, he can be seen in not only core GCW events but Jersey Championship Wrestling as well. Radrick initially made his mark as a technical wrestler, though he’s shown to have a propensity for the deathmatch style in recent times as well. It’s this very development that could lead him to victory on Saturday, albeit at the expense of Murdoch and his own title reign.

Stay tuned to the Last Word on Pro Wrestling for more on this and other stories from around the world of wrestling, as they develop. You can always count on LWOPW to be on top of the major news in the wrestling world, as well as to provide you with analysis, previews, videos, interviews, and editorials on the wrestling world. GCW In Too Deep is set to air Saturday at 8 PM EDT on FITE. Tickets are also available via Eventbrite.