With their third event now on the way (February was a snow out) Pro Wrestling GRIND looks to bring in a large number of debuts along with most of their regulars for Price Of A Mile. One interesting note going into this show is that there are not any wrestlers on here who have appeared before with more than one loss, though those wrestlers are out there. This questions whether wrestlers who might be 0-2 or 1-2 are going to be invited back. Additionally, with the debuting wrestlers going up against the winning wrestlers, it makes the wins and losses feel that much more important. Here’s what to expect at GRIND Price Of A Mile. 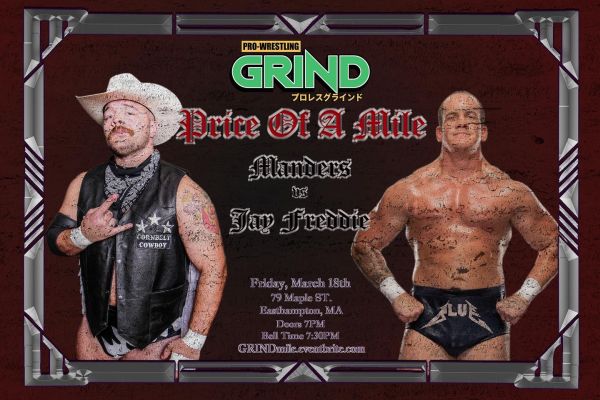 When one thinks about tough guys making their way through wrestling promotions and the Japanese influence on Pro Wrestling GRIND, it should seem so natural for someone like Manders to play the role of Stan Hansen. Having a tough-as-nails cowboy feels all too perfect, but let’s face it: One of the biggest reasons why Manders possibly also finds himself in GRIND is the same reason many of these other wrestlers do: they’ve all been overlooked. Perhaps one of the most overlooked wrestlers in this modern era is also Jay Freddie.

While Manders is typically part of Second Gear Crew in Game Changer Wrestling, Manders also typically finds himself in GCW matches that are either multi-person (teaming with his SGC friends) or scramble matches. This is all fine and well, but it could very easily be argued that Manders hasn’t had that big breakout singles match in GCW because they haven’t given him that shot. The best bout Manders has had recently was a Bullrope match against Silas Young in AAW, although Manders lost that one.

It feels like Manders will come into this match with a chip on his shoulder. Manders has something to prove, which is how most people on this roster seem to feel. Jay Freddie is perhaps the most underutilized talent in the entire world right now and him going 1-2 could be the difference between him being on the next show or not. This match is going to be an all-out brawl that will certainly leave people talking. 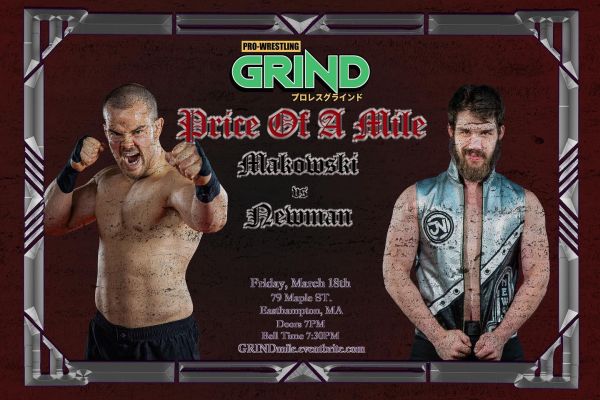 Matt Makowski is one of the few wrestlers in GRIND who is still undefeated. Jaden Newman comes into GRIND with all of the accolades one could want, but this match might become something more than that. Newman kicked off 2022 (sort of) with a win over Avery Good at the ACTION Wrestling/Southern Underground Pro show as part of The Wrestival. Since then, Newman has gone about 50-50 with wins and losses, but he has big wins over Dominic Garrini and he even defeated AJ Gray for the SUP Bonestorm Title earlier this month.

But this match won’t be as much about toughness or technique as it will be about the story being told. Makowski feels as if he has been denied a shot at the IWTV Independent Wrestling Championship- and rightfully so- and that can even be traced back to The Wrestival. Since Makowski was owed a title shot from The Wrestival, should he have not received it before AC Mack? Perhaps he even should have been in the title picture before Masha Slamovich was sent in.

Whether the North vs South feud plays into this match, it has to be in the back of Makowski’s mind that Newman is from the South. In many ways, a win over Newman could help Makowski get that title shot. Either way, this one will definitely be a hard-fought contest but in the end, Newman is coming into the house of Makowski, who is going to do what he does best: win. 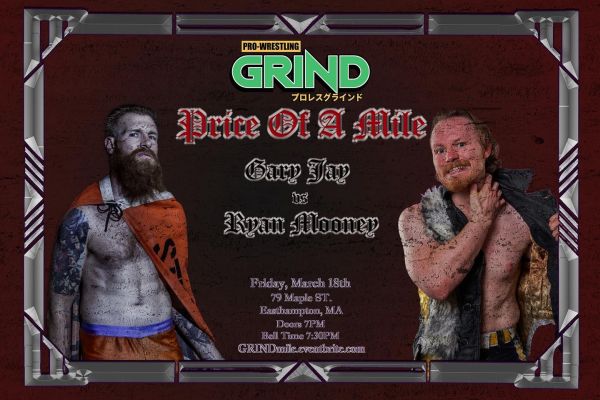 “The Rabid Honey Badger” Ryan Mooney is the only wrestler to appear on this show with a losing record. That has to be eating at him, though GRIND likely made the decision that since he only has the one loss to give him another shot. Based on the win-loss record of everyone else on this card, it has to be wondered whether Mooney would be invited back in the future if he goes 2-0 here. This brings us to Gary Jay.

Jay is a wrestler who oftentimes is seen landing on his neck, making viewers think he’s injured but he somehow comes back and wins. Jay is indestructible and it’s going to take a lot to keep him down, perhaps more than even Mooney has. But Mooney must fight as if his job is on the line- as if his spot might be taken if he loses because that might not be too far from the truth. Gary Jay is a veteran at this while Ryan Mooney is a bit younger but, size-wise and all, they match up pretty evenly. This could be the sleeper match of the night. 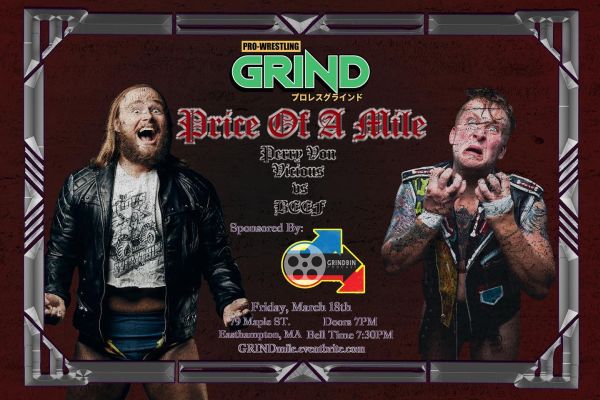 When it comes to wrestlers who are overlooked for whatever reason, BEEF comes to mind. With a recent Dog Collar Match victory over Charles Mason in Limitless Wrestling, BEEF seems to be coming into GRIND Price Of A Mile with a renewed sense of passion and violence (which is a dangerous combination) Perhaps no human walking the earth right now is more dangerous than BEEF and every time he’s out there he just seems to show why.

Perry Von Vicious won his first two matches in GRIND but, at the most recent show, he picked up his first loss against Travis Huckabee. Should Vicious lose this match, he will have lost two in a row; something of a losing streak doesn’t seem like something that would sit too well with him, nor should it anyone. This is going to be a tough match to win because both of these wrestlers want it so much. Perry Von Vicious knows what it’s like to win in GRIND, but he also knows what it’s like to lose. This fight might just last all night with neither competitor willing to give an inch. 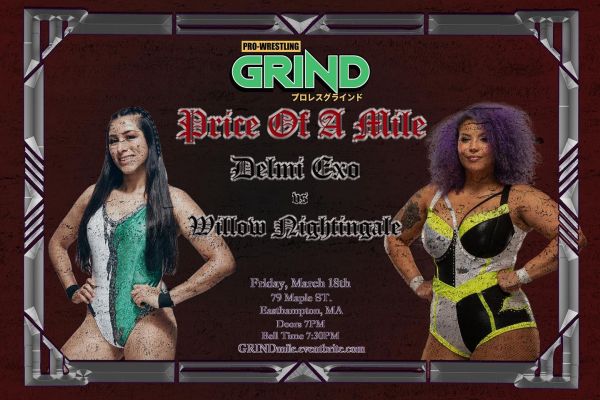 In another time and in another place (last year perhaps) Delmi Exo and Willow Nightingale would have been friends. And that’s not to say that they aren’t friends now, but it can be easily imagined that there is a match where three meanies get together and they take on the team of Willow Nightingale and the Sea Stars in Beyond Wrestling or even at WWR+. However, that’s the old Exo; the new Exo seems to be out for blood, and while Nightingale has had some big match wins lately, they might not add up to be enough to get a win here.

It also needs to be said that Nightingale has been all over television with All Elite Wrestling and Ring Of Honor, as well as part of Beyond Wrestling and Coastal Championship Wrestling, among other promotions. Nightingale might not be the typical wrestler one thinks of in terms of under-valued and under-appreciated stars, but she definitely is; as much credit as Nightingale gets, she deserves a whole lot more.

This match is a debut for both of these wrestlers, so only one of them can become 1-0 and hope to go on an undefeated streak like Davienne. The new side of Delmi Exo has a lot to prove, but given the ideas of this promotion and how Willow Nightingale can often be taken for granted, this match should go above and beyond with both wrestlers looking to leave a lasting mark at GRIND Price Of A Mile. 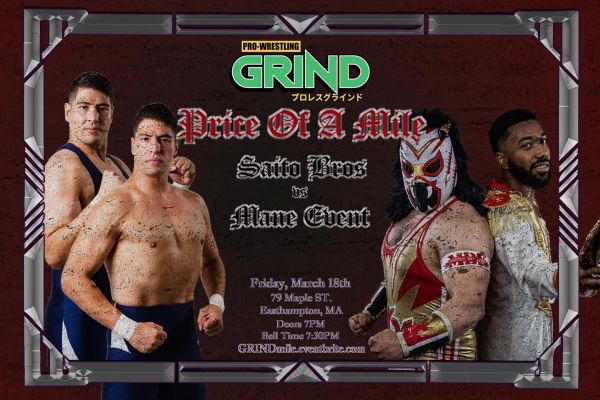 The Mane Event are the only undefeated tag team in GRIND, with wins over MSP and The Shook Crew, and now they shall face the debuting Saito Brothers, who are quite scary. When a tag team manages to have two victories over the teams that The Mane Event does and they need to find an opposing team for their next match, it doesn’t get any better than The Saito Brothers. The Saito Brothers have been making waves in All Japan Pro Wrestling, and since coming back to the U.S. with Jay Freddie, they have been a part of Major League Wrestling, ETWA Pro Wrestling, and other promotions where they’ve been dominant. 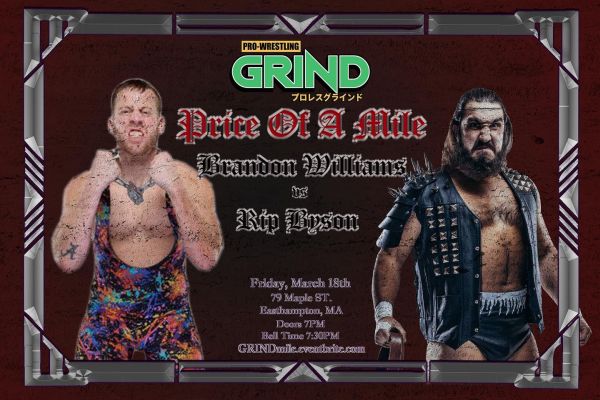 Rip Byson has the distinction of being the only wrestler in GRIND who is 3-0. Brandon Williams makes his way to GRIND from the South, specifically places such as New South Pro Wrestling, SUP and ACTION, with wins over such names as Damyan Tangra, Robert Martyr, and Tyler Matrix. With wins over Travis Huckabee, Jay Freddie, and WARHORSE, Byson seems to be one to take on all challengers. Byson has also recently picked up huge victories over the likes of Masha Slamovich, Slade, and Matt Taven in Limitless Wrestling.

While this match doesn’t feel as much like it will be a case of the North vs the South, it does feel as if Williams is going to come into Byson’s backyard with something to prove. Whether misused or undiscovered, it feels like Williams is coming out in this match to make a statement by giving Byson his first loss and Byson is going to do all that he can to make sure that doesn’t happen. 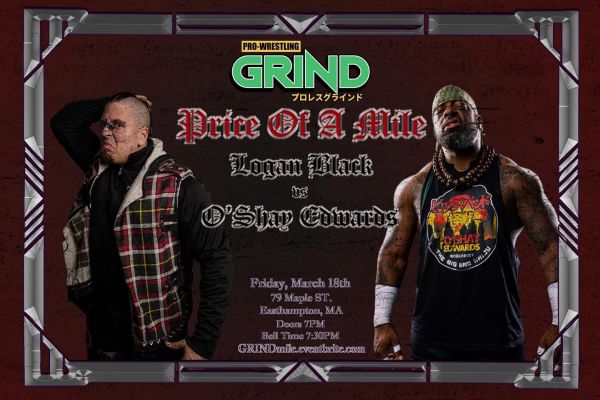 Though this is a match from the February show that got snowed out, it is still a match worthy of being the main event in any promotion and these are simply two of the best at what they do right now. Logan Black has been tearing through New York City and is one of the few wrestlers still undefeated in GRIND. He might need that momentum, though, when going up against O’Shay Edwards, a real-life kaiju. This match will look a lot like King Kong vs Godzilla with the entire city of Easthampton, Massachusetts being left in their wake. There just simply aren’t enough words to capture what will happen when these two meet inside of that ring and it is going to be explosive come GRIND Price Of A Mile.