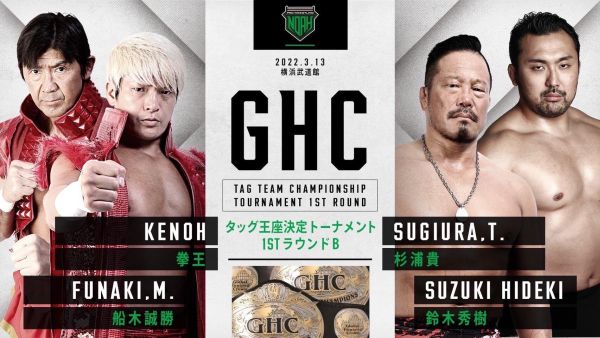 Great Voyage in Yokohama 2022 features a KONGO vs Sugiura Gun match, kicking off first of two semi-final matchups in the GHC Heavyweight Tag Team Championship tournament. Kenoh and Masakatsu Funaki look to show their newfound teamwork is the strongest against Takashi Sugiura and the returning Hideki Suzuki. Suzuki was the only other person who made an appearance at the press conference for the match other than Kenoh. Suzuki showed up via video, angering Kenoh with his playful antics. This wound up the KONGO leader before the bout.

Yet there are two other pieces of this puzzle in Masakatsu Funaki and Takashi Sugiura. They met back at the Sugiura Gun produce show where Sugiura defeated Funaki. However, this will be the first meeting since Funaki made the jump to KONGO. It’ll be interesting to see how the two teams work together and who comes away with the win and a ticket to the finals. 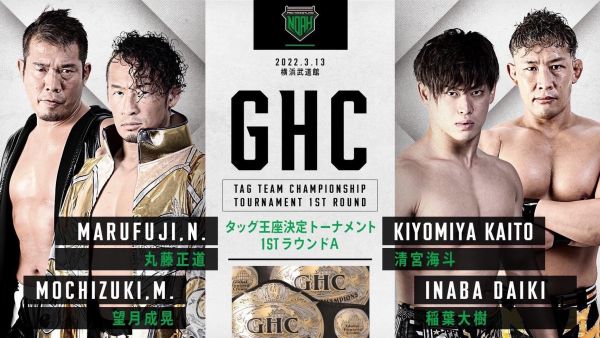 This match is probably the more compelling semi-final match in the mini-tournament. Naomichi Marufuji never lost the GHC Heavyweight Tag Team Championship and had to vacate, and Kaito Kiyomiya was apart of the team that Keiji Muto and Marufuji defeated for the belts. However, the real game-changers will be their tag team partners that accompany them into baffle. Masaaki Mochizuki joins fellow M’s Alliance member Marufuji in a quest to capture the GHC Heavyweight Tag Team Championship together for the second time. They held the belts back in 2020, defeating Go Shiozaki and Katsuhiko Nakajima before losing them to Rene Dupree and El Hijo De Dr Wagner Jr.

Meanwhile, Kiyomiya is joined by Daiki Inaba, who came to NOAH after the closure of WRESTLE-1 to face Kiyomiya. After their battle, they ended up forming a tag team and Kiyomiya has spoken about wanting to grow alongside Inaba. They’ve been working a lot on their teamwork recently and this is their chance. Inaba will more than be focused on trying to beat Marufuji, who always seems to get him going whenever they’re in the ring together. The teamwork of these duos isn’t in question, but what is questionable is whose teamwork is the strongest. 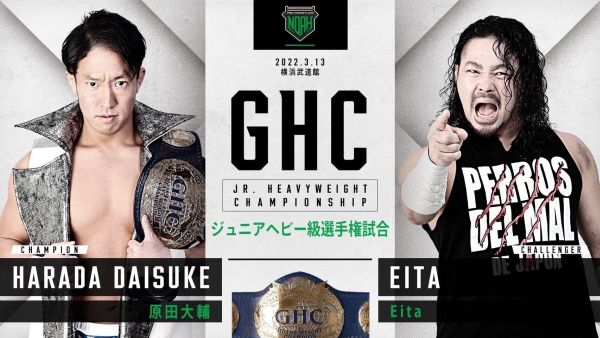 Daisuke Harada looks to make his third defense of the GHC Junior Heavyweight Championship against a first-time challenger. Dragon Gate and Perros Del Mal De Japon’s Eita makes his first attempt at taking the NOAH Juniors’ top prize. Eita made a challenge to Harada after a tag match at an N Innovation event; Harada would accept the challenge. It’ll be a interesting bout as not too many people hold a victory over Eita in Pro Wrestling NOAH. This is probably Harada’s biggest test in recent memory. Eita will have no problem breaking rules, but he’s one of the best users of the Llave style currently in Japan.

Eita is inside the head of Harada after joining the press conference for their title match via video while he was showering. Eita showed a lack of respect for the champion and a lack of care for who he is as a competitor. Harada must keep his strong will but not overlook Eita; otherwise, Harada may find himself losing the GHC Junior Heavyweight Championship to the same outsider he spoke up against when he was holding the GHC Junior Heavyweight Tag Team Championship. Will Eita add another trophy to his decorated career, or will he feel the power of the junior ace?