It’s almost time, once again, for All Elite Wrestling’s premiere Friday night wrestling program, AEW Rampage. Things are absolutely going to heat up this Friday as the “Switchblade” Jay White makes his in-ring AEW debut on Rampage against an infuriated individual. “The Professor” challenges another soul to last at least five minutes against her in the ring. Plus, qualifiers for the “Face of the Revolution” ladder match continue on this week’s Slam Dunk edition of AEW Rampage.

What a way to end the week – let us preview the proceedings on another explosive edition of AEW Rampage. Without further ado, it’s Friday night and we all know what that means! It’s time to run it down.

“The Forbidden Door” is about to be hacked into pieces as “Switchblade” Jay White makes his in-ring AEW debut on this week’s AEW Rampage. He takes on a beaten down and, most probably, ticked off Trent Beretta. White made his astounding AEW debut, aiding The Elite in dismantling Roppongi Vice on last week’s AEW Dynamite. Fans were flabbergasted at the sight of the New Japan Pro-Wrestling megastar as he made his presence felt in a big way under the AEW banner.

However, Jay White wasn’t done just yet. After The Young Bucks had beaten Roppongi Vice in a grueling matchup on last week’s Rampage, Beretta came to the aid of Orange Cassidy after “Freshly Squeezed” was assaulted post-match. Beretta warded off Matt and Nick Jackson from inflicting further damage to his fallen friend.

As Beretta’s back was turned, Jay White would catch him off guard, hitting The Blade Runner and walking up the ramp, not even breaking a sweat. To quote Excalibur, “you’ve got to give the people what they want!” And, AEW management did just that. This Friday night, Trent Beretta has the opportunity to exact some revenge as he takes on NJPW’s first-ever grand slam winner and Bullet Club leader Jay White in his in-ring AEW debut. It all goes down this Friday night only on TNT! 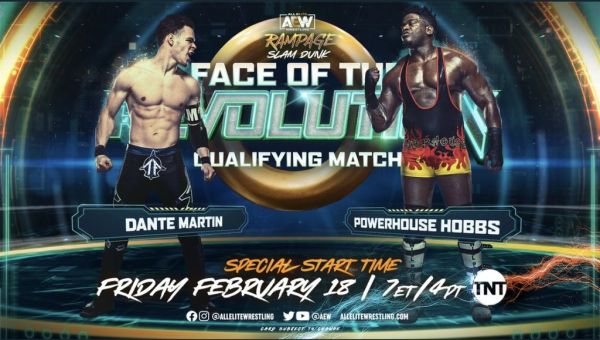 On last week’s Rampage, Ricky Starks made it explicitly clear that Team Taz still has a big problem with Dante Martin, and he promised that they’re about to teach him the lesson he most certainly needs to learn. The high-flying Martin managed to infiltrate the group and caused chaos from the inside before he ultimately backstabbed the faction, leaving them wondering how someone could’ve easily manipulated the group.

Dante Martin’s days might be numbered as he takes on Powerhouse Hobbs in a “Face of the Revolution” Ladder match qualifier. Team Taz can kill two birds with one stone. Not only does Hobbs have the chance to qualify for the ladder match, and possibly win the whole thing with a TNT Championship match at stake, but Team Taz’s mastodon can rid themselves of Dante Martin once and for all.

However, Dante Martin is one outstanding competitor, and he will do everything in his power to take down any opponent no matter the size difference. It’s Martin versus Hobbs; rivalries will be settled and opportunities will be secured. You can catch all the mayhem unfold on another action-packed edition of AEW Rampage Slam Dunk!