Live from the Grand Sports Arena in Chicago, Illinois, Game Changer Wrestling will hold GCW Say You Will. This event wraps up the promotion’s two-day tour of the Midwest and to say that it intends to end things on a high note would be an understatement. Included in the action to come will be the Ring of Honor World Champion defending the gold in his quest to uphold the “Code of Honor.” Whether you plan on attending live or watching from home, there will be plenty to experience. Here’s what to know before the event takes place this Saturday.

GCW Say You Will – Full Card 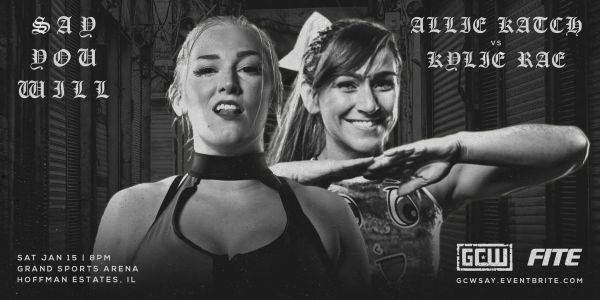 At Say You Will, “Smiley” Kylie Rae makes her return to Game Changer Wrestling, and it’s incredibly fitting that it’s in her hometown of Chicago. This exuberant Booker T trainee has been incredibly busy throughout 2021, whether it was in Warrior Wrestling, Freelance Wrestling, or her home promotion of the National Wrestling Alliance, just to name a few. During the past few months, Rae has been relatively exclusive to the Chicago area, though when an opportunity arose, she hasn’t failed to seize it. Rae’s last GCW appearance dates back to August 2020, when she faced Cole Radrick at Keep in Touch. This Saturday, at GCW Say You Will, the “Smiley” one faces off against a fan favorite in Allie Katch.

Make no mistake: in their own ways, Rae and Katch are fan-favorite competitors. However, their approaches are stark contrasts to one another, with Rae being more upbeat and technical while Katch’s approach is grittier, leaning more toward hardcore or deathmatch wrestling. Katch’s case is especially true, as in 2021, she administered punishment on everyone from Chelsea Green to Mance Warner and Matthew Justice. For this reason alone, this encounter will be one to keep an eye on, especially for those that have yet to see them share a ring. How will their styles gel? Will they rely on their own in-ring styles or emulate the other to seize the psychological advantage? Whatever the case may be, this will be a match to keep an eye on as we approach GCW Say You Will. 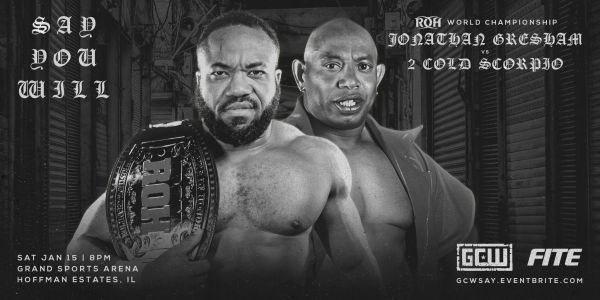 Jonathan Gresham’s quest to defend the ROH World Championship anywhere and everywhere continues at GCW Say You Will. This Saturday, “The Foundation” puts the gold on the line against veteran wrestler 2 Cold Scorpio. It would be fair to call Gresham one of the most polished wrestlers in the world today, as he’s a smooth technician that can adapt to various styles. Since winning the ROH world title last month, Gresham has defended the gold against such names as Adam Priest and AJ Gray across the independent scene. Ring of Honor may be on hiatus, but its top champion hasn’t slowed down. Gresham maintains his “Code of Honor” with this upcoming major title defense; depending on who’s asked, this may be his most important to date.

2 Cold Scorpio has been wrestling for over 3 decades, and in his mid-50s, he continues to work at a high level. Sean Henderson Presents Wrestling, Violence X Suffering, and of course, GCW – these are just a few organizations the high-flying legend has worked throughout 2021. In 2022, however, Scorpio has gold on his mind. He’s no stranger to singles accolades, either. Keep in mind that, from 1994 to 1996, he became a 4x World Television Champion for Extreme Championship Wrestling. In fact, he holds the record for most reigns with the title in question. This doesn’t even begin to touch on his accomplishments in the independent wrestling scene at large. Can Scorpio add the ROH World Championship to his extensive resume? This question will be answered at GCW Say You Will. 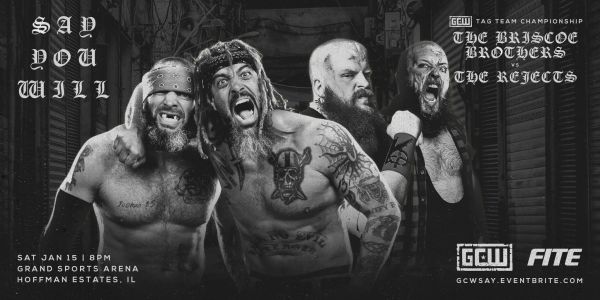 The Briscoe Brothers Issue a Challenge

The ROH World Championship won’t be the only title on the line this Saturday. The Briscoe Brothers will be in the building, holding their open challenge for their GCW Tag Team Championship. For the uninitiated, Jay and Mark Briscoe captured the GCW tag team titles this past October at War Ready, besting Mance Warner and Matthew Justice to do so. Since then, The Briscoes have held onto the belts, defending them in not only GCW but their home promotion, Ring of Honor. In fact, The Briscoes are coming into Say You Will draped in gold, as they just recently captured their twelfth ROH World Tag Team Championship at Final Battle.

It goes without saying that The Briscoe Brothers are among the elite tag teams on the independent scene. From Combat Zone Wrestling to New Japan Pro-Wrestling and beyond, it seems like any organization they’ve stepped into, they’ve conquered the tag team division. This Saturday, The Briscoes will will be in action, defending the GCW tag team titles against Reed Bentley and John Wayne Murdoch. This particular duo goes back all the way to the mid-2010s, having competed in IWA Mid-South, Combat Zone Wrestling, and of course, GCW. The Rejects are also former GCW Tag Team Champions, having held the straps for 197 days. Can they capture the gold once again at Say You Will?

GCW Say You Will will take place in Chicago, Illinois on January 15, 2022.

Stay tuned to the Last Word on Pro Wrestling for more on this and other stories from around the world of wrestling, as they develop. You can always count on LWOPW to be on top of the major news in the wrestling world, as well as to provide you with analysis, previews, videos, interviews, and editorials on the wrestling world. GCW Say You Will is set to air Saturday at 8 PM CST on FITE. Tickets are also available via Eventbrite.