Live on FITE, this week at 6:05 PM EST, the National Wrestling Alliance returns with another edition of NWA Powerrr. This will be a major episode, as it features such action as a World Television Championship defense from a dominant titleholder. Furthermore, Matt Cardona will be making his NWA Powerrr in-ring debut alongside newfound ally Mike Knox in triple threat tag team action. All of this, and more, are set for tonight. Without any further delay, let’s take a closer look at the action to come. 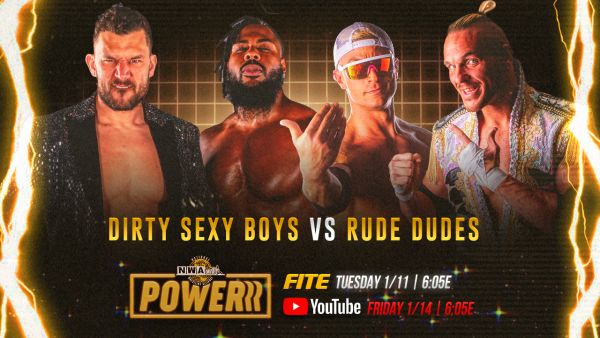 As Jamie Stanley stated on last week’s NWA Powerrr, Rude Dudes are all about “bashing nerds and looking adorable while doing it.” Stanley was in singles action on said episode in a four-way contest. Though he came out victorious, his means of doing so were less than heroic, as he quickly tossed Jeremiah Plunkett out of the ring following the latter’s devastating spinebuster on another opponent.

On the same show, Dirty Dango and JTG, collectively known as Dirty Sexy Boys, confronted former NWA World Tag Team Champions Aron Stevens and Kratos during an interview. Last month, Stevens and Kratos picked up a victory over DSB, though fans would argue this wasn’t an entirely clean victory. On this week’s NWA Powerrr, two of the company’s featured teams square off. Will Dango and JTG be able to rebound or can Rudo and Stanley pick up the win in their first NWA match of 2022? 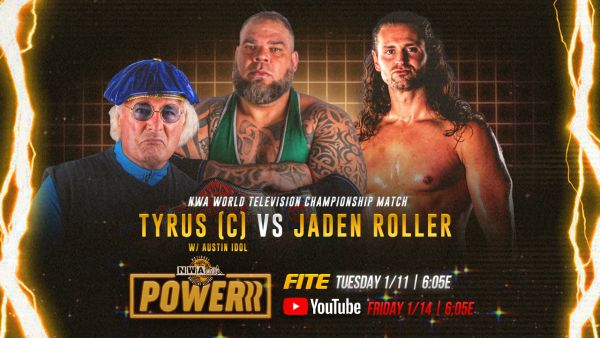 The reigning NWA World Television Champion, Tyrus, will also be in action as he defends his title against Jaden Roller. On the December 21, 2021 edition of NWA PowerrrSurge, Roller defeated Rush Freeman in a number one contender’s match. Though the North Dakota-born wrestler will undoubtedly be motivated to win gold, it won’t be an effortless task given the caliber of opponent he’s up against.

Tyrus has been incredibly dominant as the NWA’s TV titleholder, most recently retaining the belt against Cyon at NWA Hard Times 2. This doesn’t even begin to touch on the powerhouse’s faction, which consists of manager Austin Idol, in addition to Jordan Clearwater, BLK Jeez, and Marshe Rockett. Despite this, it’s not a certainty that Tyrus will require the numbers advantage to retain the NWA World Television Championship. See if his title reign continues on this week’s NWA Powerrr. 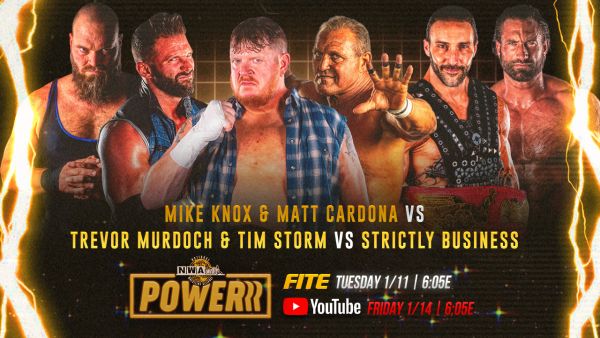 Following a considerable amount of talk, Matt Cardona makes his official NWA Powerrr in-ring debut this week. However, he won’t be alone, as he’ll be in triple threat tag team action alongside Mike Knox. For the uninitiated, Cardona made his first NWA appearance at Hard Times 2, confronting Trevor Murdoch after he successfully retained the NWA Worlds Heavyweight Championship. What transpired was a brawl that saw Murdoch laying, as well as Knox standing alongside Cardona, who held “The Ten Pounds of Gold” in his grasp.

On last week’s Powerrr, Cardona took to the classic NWA desk, claiming that he wanted to “save” the company, calling it “old, dated, and boring.” He even went so far as to imply the company be renamed the MCWA, or Matt Cardona Wrestling Alliance. Cardona claimed he wanted to “save” Murdoch, bringing relevancy to him, the company, and the NWA Worlds Heavyweight Championship. Consider the elements of not only Murdoch and Tim Storm, as well as Strictly Business, and this will be a triple threat tag team encounter to keep an eye on.