A new year is fast approaching and Gatoh Move Pro Wrestling intends to close things out on a high note. ChocoPro #186 is the second to last Gatoh Move show of 2021 and it will feature a major title match pitting the Super Asia Interim Champion against a wily long-time Ichigaya Chocolate Square competitor. Will we see a new titleholder or is the reigning champion set to close the year out holding the blue belt? Here’s what to know about the action set to take place on the official Gatoh Move YouTube channel. 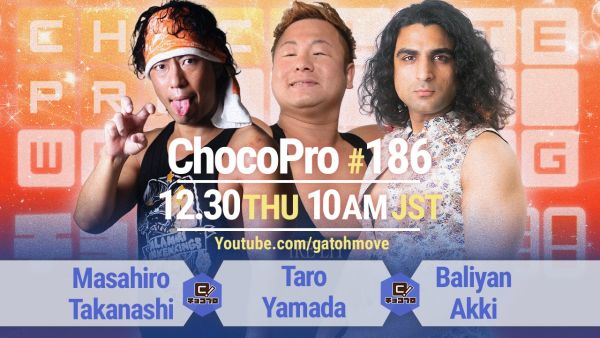 One of the preliminary matches set to take place is a three-way bout between Masahiro Takanashi, Baliyan Akki, and the man known as Taro Yamada. For those that don’t know, Yamada is a regular for the Japanese promotion 666. Most recently, he competed in the promotion’s Tama Pro Tag Team Title League, competing alongside Guts Ishijima. It’s also worth noting that, depending on one’s perspective, he is a master of disguise. Needless to say, he will step into Ichigaya Chocolate Square with a big challenge ahead. Between the veteran status of Takanashi and the Asia Dream Tag Team Championship status of Akki, it goes without saying that Yamada will have anything but a day off here. See how this three-way match unfolds come ChocoPro #186. 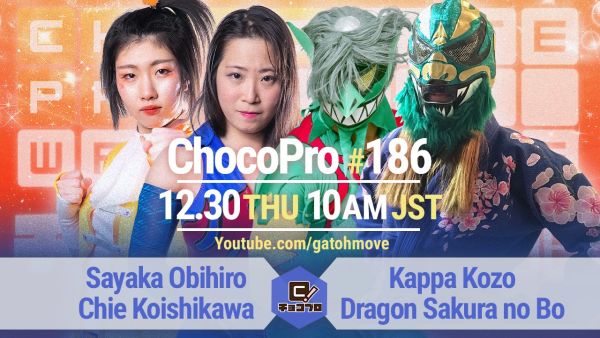 Sayaka Obihiro and Chie Koishikawa vs. Kappa Kozo and Dragon Sakura no Bo

What’s more chaotic than one devilish entity? How about two in the same match? On ChocoPro #186, the returning Kappa Kozo steps inside Ichigaya to team up with Dragon Sakura no Bo. Recent ChocoPro viewers will undoubtedly be familiar with Kozo, who’s been embroiled in an ongoing feud with Sayaka Obihiro dating back to their earliest days in professional wrestling. It would seem that Kozo has found allyship in the possibly equally devilish Dragon as they take on Obihiro and Chie Koishikawa. Most recently, “Chiezo” has found herself at odds with Kozo, facing him back on Episode #182 earlier this month. In this contest, the girl with “Endless Energy” ended up looking at the lights. Only time will tell if Obihiro and Koishikawa can pick up a victory in their latest challenge.

On ChocoPro #186, Super Asia Interim Champion Chon Shiryu defends against Antonio Honda in the always unpredictable Ichigaya venue. These two veteran competitors last appeared on Episode #184, which was Part 1 of ChocoPro’s holiday festivities. They competed in the Sakura Santa Presents Christmas Rumble bout, featuring them as well as Sayuri, Tokiko Kirihara, Sayaka Obihiro, Yuna Mizumori, and Chris Brookes. This was a chaotic match, to say the least, as the participants attempted to claim a lone Christmas present suspended from a hook. Shiryu and Honda were the last men standing, but despite Shiryu’s best efforts, it was Honda that ultimately unhooked the gift, winning the match and the prize in question.

Post-match, Honda unwrapped the gift, revealing a Christmas tree-shaped card. Attached to the card was a note from “Sakura Santa,” granting one wish to the winner of the Christmas Rumble. Following a brief period of contemplation, Honda requested a match for the Super Asia Championship, to which Sakura gave the green light. Shiryu was surprised by this, but being the fighting champion he was, there was no chance he would back down. The match was later made official for ChocoPro #186, both men intending to close out the year while holding gold.

Chon Shiryu and Antonio Honda are no strangers to one another in the broader world of professional wrestling. This past January, at DDT Pro Wrestling’s New Year Special 2021 event, Honda was victorious over Shiryu. Furthermore, they’ve competed in multiple DDT and Gatoh Move matches, even prior to the latter’s genesis of ChocoPro. However, Episode #186 marks the first time that Shiryu and Honda compete one on one on the YouTube wrestling show. How will this encounter unfold as we inch closer to 2022?