Gatoh Move Pro Wrestling is only 2 episodes away from the finale of ChocoPro Season 10. This has been a packed season, to say the least, and the hits continue with ChocoPro #179. This show consists of a duo of tag team matches, one of which features the in-ring debut of a globetrotting deathmatch enthusiast. How will this particular star make an impression within the intimate yet lively Ichigaya Chocolate Square venue? Here’s what to know heading into this show, set to air live from the official Gatoh Move YouTube channel. 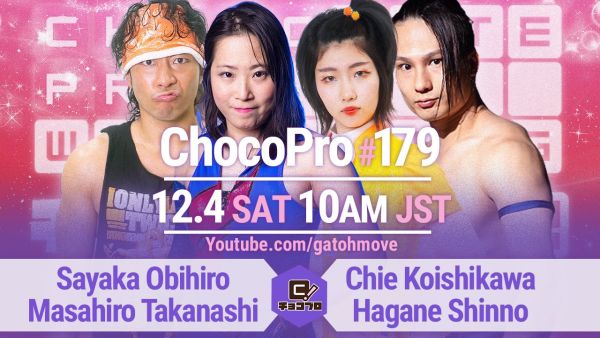 ChocoPro #179 will kick off with the reunion of Egg Tarts as they take on the veteran pair of Sayaka Obihiro and Masahiro Takanashi. This marks the first time that Chie Koishikawa and Hagane Shinnou have teamed up since Episode #168 back in October, when they fell to Best Bros in an Asia Dream Tag Team Championship match. This isn’t to say that the aforementioned encounter was an easy one for the champions. The teams involved battled for over 36 minutes. Since then, “Chiezo” has seen inconsistent success, though perhaps reuniting with her stoic striking comrade will be her proverbial ticket toward more frequent victories.

A victory won’t come without a fight, however, against the combined efforts of Obihiro and Takanashi, the latter of whom saw success on the previous show. On Episode #178, Takanashi helped usher his team to victory in an 8-person tag team encounter. Though he’s a man with many tasks, especially in the absence of Emi Sakura, the beer-loving veteran has kept his focus and emerged victorious in several encounters. The same can’t be easily said for Obihiro, whose last ChocoPro victory goes back all the way to Episode #74 in December 2020. Can “The Blue Heart” regain momentum by picking up a victory alongside Takanashi on ChocoPro #179? 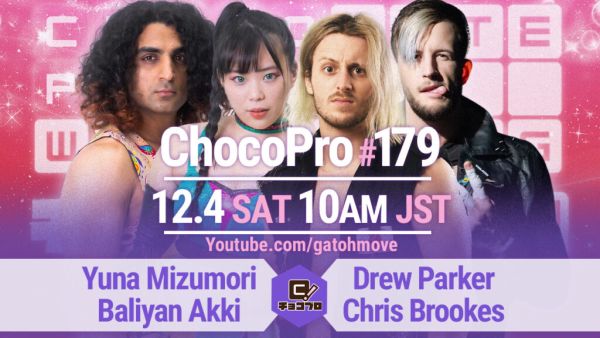 The main event of Episode #179 sees the ChocoPro debut – one that had been put off due to injury, at that – of Drew Parker. To say that the deathmatch-fighting, high-flying United Kingdom native has been busy would be an understatement. He’s been most prominent in Big Japan Pro-Wrestling, where he won the Deathmatch Heavyweight Championship this past July and took part in numerous grueling bouts commonly associated with the promotion. Outside of BJW and Japan, he’s made multiple appearances in America, specifically for Game Changer Wrestling. At GCW Homecoming, the same month he won BJW gold, Parker captured the GCW Ultraviolent title from Alex Colon. Now, all these months later, Parker returns to Ichigaya Chocolate Square with newfound grit and experience on his side.

There is perhaps no more fitting of a partner for Parker than Chris Brookes, who’s not only been a close friend but tag team partner as well. Their combined efforts in BJW, DDT Pro-Wrestling, and elsewhere are well documented. Furthermore, Brookes seldom loses in Ichigaya; this speaks highly to his and Parker’s chances of leaving ChocoPro #179 with a victory. Together, they will take on the “Tropical Namaste” duo of Yuna Mizumori and Baliyan Akki. Though they’ve teamed up on multiple occasions, Akki will be a competitor to look out for. Toward the tail end of Season 10, more often than not, the self-proclaimed “Ace” of ChocoPro has come up short in his matches. Time will tell if he can turn the tide in his favor.