NWA Hard Times 2 is only a few weeks away and the National Wrestling Alliance has been making strides toward the event in question. Look no further for evidence of this than the NWA Tag Team Title Tournament, which has been ongoing since this past September. Tonight on FITE, we will see the conclusion of the tournament in question. The last team standing will challenge the current NWA World Tag Team Champions, La Rebelión, at Hard Times 2. Without any further delay, let’s take a deeper dive into PowerrrSurge, set to air at 6:05 PM EST. 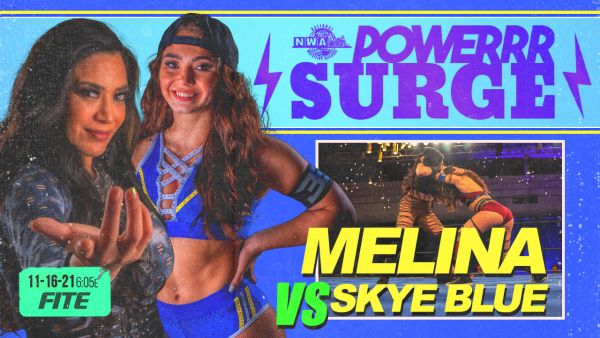 Tonight’s edition of NWA PowerrrSurge will not be short on women’s action. In one of the featured matches of the show, the up-and-coming Skye Blue will take on a veteran of the game, Melina. Moreover, Blue will challenge the number one contender for the NWA World Women’s Championship, which is currently held by Kamille. Melina earned said title match this past October on NWA Powerrr, where she bested Chelsea Green and Kylie Rae in three-way action. Now, the former 5x WWE women’s titleholder is set to take on “The Brickhouse” at Hard Times 2. It’s a long way to the show, however, and it’s a path paved with one turn after another. Despite her legendary status, Melina shouldn’t overlook Blue; the diminutive Chicagoan slowly but surely building a name for herself, not just in the National Wrestling Alliance but the professional wrestling world at large. 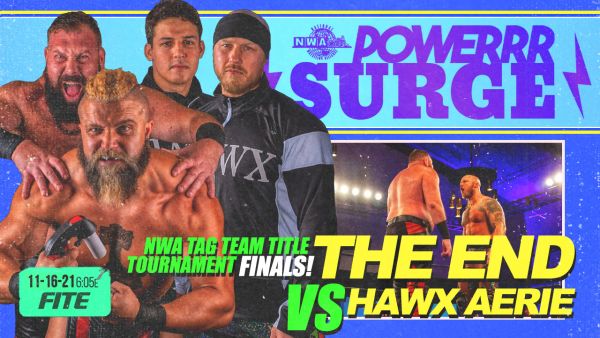 The headline match of tonight’s NWA PowerrrSurge will be the conclusion of the ongoing Tag Team Title Tournament. This particular tournament began this past fall, featuring 8 teams aiming for championship gold. Tonight, we will see the two teams that endured the most meet in singles action. On one side of the ring stands The End, the powerhouse duo of Odinson and Parrow; on the other side stands Luke and PJ Hawx, also known as Hawx Aerie. This team, which challenged for gold on multiple occasions, defeated Cyon and Jordan Clearwater in the first round before overcoming former NWA World Tag Team Champions Aron Stevens and JR Kratos in the semifinals. Meanwhile, the father-and-son tandem of Hawx Aerie earned their spot in the finals by defeating Colby Corino and JTG in the first round before going into the semifinals to triumph over the contrasting tandem of Mims and Sal Rinauro. Which team will go on to challenge for the NWA World Tag Team Championship at Hard Times 2? All will be known following tonight’s NWA PowerrrSurge.