This Saturday, following Josh Barnett’s Bloodsport 7, Game Changer Wrestling returns to the Ukrainian Cultural Center for GCW War Ready. Based on the card alone, one can see that this is nothing short of a stacked show, including a main event that will take the art of wrestling to the absolute limit. Given the action that would undoubtedly take place the evening prior, GCW will be looking to top themselves. Without any further delay, let’s take a deeper dive into the action set for this Saturday. 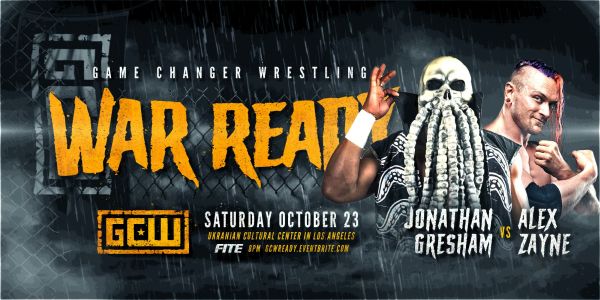 One of the matches to witness at GCW War Ready is a first-time singles encounter. Former Ring of Honor Pure Champion Jonathan Gresham will go one-on-one with the high-flying “Sauce” himself. Gresham has had an eventful 2021 in GCW, not only battling Minoru Suzuki at Highest in the Room this past September but picking up a victory over Starboy Charlie at GCW Homecoming the July prior. It would seem that “The Octopus” is one of the fan-favorite competitors among GCW fans. Viewers know what when Gresham is on the card, they will witness a technical masterpiece. However, at War Ready, Gresham will face off against a wrestler whose style is a stark contrast to his own.

“The Sauce” Alex Zayne has been incredibly active on the independent scene in late 2021. From Absolute Intense Wrestling to, of course, GCW, Zayne’s presence has been undeniable. He’s also picked up a number of wins, notably against Jordan Oliver at Highest in the Room and over AR Fox at Get Lost Alot. Zayne’s in-ring style is incredibly acrobatic, as he utilizes a range of fast-paced and high-flying maneuvers to keep his opponents on the defensive. With that said, “The Sauce” has not faced Gresham yet, which makes this upcoming bout that War Ready that much more interesting. Keep a close watch on this one; you may miss something otherwise. 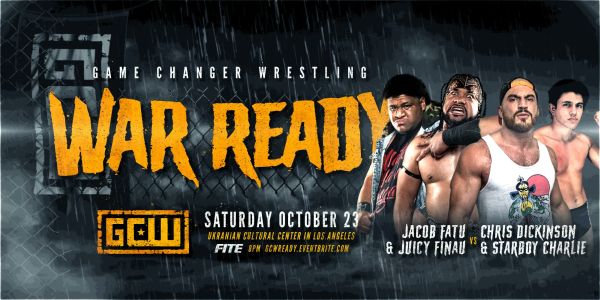 In tag team action, GCW War Ready will see the powerhouse duo of Jacob Fatu and Juicy Finau take on the recently formed tandem of Chris Dickinson and Starboy Charlie. To say that Fatu and Finau are likely to pack a collective punch would be an understatement. Though Finau is still relatively new to independent wrestling, he’s developed a following across various GCW events. One may consider him something of a cult hero to fans of the promotion. Meanwhile, Fatu’s path of dominance has been well documented. As the reigning World Heavyweight Champion of Major League Wrestling, “The Samoan Werewolf” held the title for over 800 days. If there is any partner that Finau could ask for, it’d be hard to imagine anyone more dominant than Fatu.

Standing on the other side of the ring, at War Ready, will be Chris Dickinson and Starboy Charlie. Given the number of singles matches these two have had, it shouldn’t have surprised viewers when they formed a tag team. This was built from mutual respect, especially when Charlie overcame Dickinson at No Signal in the Hills last month. At Get Lost Alot, Dickinson and Charlie challenged GCW Tag Team Champions Matthew Justice and Mance Warner in an unsuccessful effort. This Saturday, “The Dirty Daddy” and his up-and-coming partner aim to pick up their first tag team victory. Expect this match to hit hard and, particularly in the case of Charlie, move at breakneck speed. 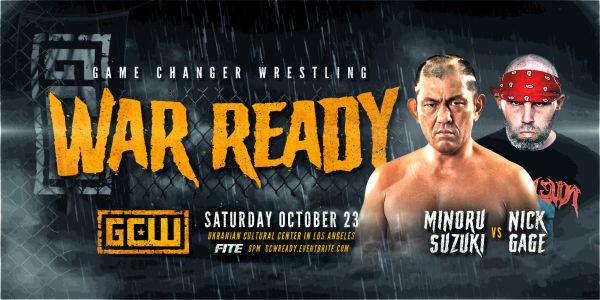 A Main Event Steeped in Anarchy

If there is any match that’s worthy of main eventing GCW War Ready, this would be it. The Ukrainian Cultural Center will attempt to house a full-out brawl between two self-proclaimed kings of professional wrestling. To longtime GCW fans, Nick Gage needs no introduction. “The King of Ultraviolence” is not only a multi-time GCW World Champion but a deathmatch specialist, utilizing everything from glass panes to his patented pizza cutter to inflict pain on his opponents. Despite his violent approach, he developed a connection with audiences across the country. Simply put, when a GCW event is in town, fans will want to see “The God of This Sh*t” bring mayhem. Gage has faced a litany of opponents throughout his career, some tougher than others, though it’s unlikely there are many as dangerous as his opponent this Saturday.

The Karl Gotch-trained “Wrestling King,” Minoru Suzuki, has been incredibly active in the United States as of late. From his GCW matches to the various appearances he made in All Elite Wrestling, Suzuki has made the most of his time in America. He made his return to GCW at Highest in the Room, where he defeated Jonathan Gresham in a well-received main event. With that said, Suzuki doesn’t seem to wrestle for fan adulation as much as he does for the satisfying of delivering punishment. Whether he’s wrenching an opponent’s fingers or locking them in a grueling submission maneuver, the former 2x NEVER Openweight Champion takes a perverse pleasure in pain. For this reason alone, he’s the ideal opponent for Gage at War Ready. When these two men share the ring this weekend, expect neither man to walk away the same.

Stay tuned to the Last Word on Pro Wrestling for more on this and other stories from around the world of wrestling, as they develop. You can always count on LWOPW to be on top of the major news in the wrestling world, as well as to provide you with analysis, previews, videos, interviews, and editorials on the wrestling world. GCW War Ready is set to air Saturday at 11 PM EST on FITE. Tickets are also available via Eventbrite.