One of the longstanding truths regarding Gatoh Move Pro Wrestling is that its doors are open to wrestlers of all shapes and sizes. Ichigaya Chocolate Square, and other venues the promotion has run from, introduced a number of unique competitors to viewers around the world. ChocoPro #165 will be no exception, as fans can anticipate not one but two different debuts, each with their styles and backgrounds. Of course, fans can expect to see the core ChocoPro group that makes these shows what they are. Let’s take a deeper look into the action to come. 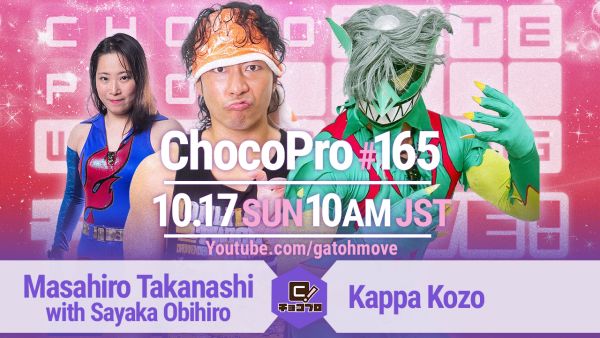 In the opening match of ChocoPro #165, Kappa Kozo will be making his Gatoh Move debut. This particular character should be familiar to longtime followers of IWA Japan; this sinister-looking grappler appeared for the promotion from 2003 to 2014. During this time, he’s been among the most colorful performers in the promotion, even becoming a 2x IWA World Junior Heavyweight Champion. What can one expect from this unpredictable performer within the confines of Ichigaya Chocolate Square? It’s worth noting that among the wrestlers Kozo faced in IWA Japan was Masahiro Takanashi.

This encounter took place at the IWA Japan 20th Anniversary Show on May 18, 2014. In the main event, Takanashi teamed with strike-based DDT Pro-Wrestling star KUDO in a winning effort against Kozo and his partner, current Pro Wrestling NOAH star Masao Inoue. Since then, Takanashi has gone to become an even more seasoned competitor, including one of the current pillars of Gatoh Move, especially now in the absence of Emi Sakura. What will unfold when he meets Kozo for the first time in over 7 years? Given that he’ll have Sayaka Obihiro, who also faced Kozo in IWA Japan, on his side, Takanashi may feel all the more confident. 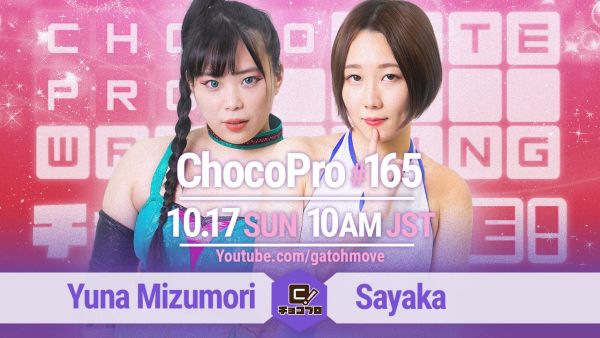 Making her ChocoPro Season 10 debut is Sayaka, who will undoubtedly be looking to make said season her own. Though Gatoh Move’s “Beautiful Cosplayer” wrestled many matches in Season 9, the majority of them ended in losses on her end. Nonetheless, she fought valiantly against various opponents, especially those with more experience than her including Masahiro Takanashi and Chris Brookes. Another name that can be added to the conversation is Yuna Mizumori, with who she had a competitive Season 9 encounter. On ChocoPro #157, they battled one another in a match that went nearly 15 minutes, with “The Pineapple Girl” emerging victorious.

Since then, Yuna Mizumori has been focused on gold. Though she is a 2x Asia Dream Tag Team Champion, “Yunamon” recently expressed an interest in singles gold. In the ChocoPro Season 10 premiere, she battled Chon Shiryu in a match to determine the next contender for the Super Asia Championship. The match would end in a draw, followed by Takanashi and Baliyan Akki throwing their names into the title contention fold. The competition is intense, to say the least, and a win would make a difference for anyone. Can “The Tropical Fairy” herself pick up another win over Sayaka en route to a potential Super Asia title match?

Another individual making their ChocoPro debut is Shin Suzuki, who is currently wrestling for Pro Wrestling HEAT-UP. Boasting an athletic background that includes sumo wrestling and judo, Suzuki made his professional wrestling debut in 2006, competing for a variety of promotions since then. Such promotions include, but aren’t limited to, DDT, Ice Ribbon, and Itabashi Pro Wrestling. Suzuki won’t be alone in his ChocoPro debut, as he’ll be working alongside the endlessly energetic Chie Koishikawa. Whether Suzuki can match his partner’s exuberance remains to be seen. Nonetheless, “Chiezo” can be described as something of a tag team specialist, meaning that the newcomer will be in capable hands.

This isn’t to say that Koishikawa and Suzuki should rest easy heading into ChocoPro #165, however. In the main event, they will face the Asia Dream Tag Team Champions, Best Bros. The day prior, they would have faced Koishikawa and Sawasdee Kamen. Mei Suruga and Baliyan Akki know each other better than any other competitors in Gatoh Move. This partnership allowed them to not only win the titles last year but go on to hold them for almost 300 days. Best Bros have not been short on confidence, and it’s easy to see why, but any slipup could result in derailed momentum. See how this main event unfolds on the official Gatoh Move YouTube channel.