Hulk Hogan is one of the most controversial and contentious figures professional wrestling has ever seen. Others revile him due to his politicking and various scandals. With that being said, one would be remiss not to mention how big of an icon “The Immortal One” was to the wrestling industry. He took the WWE, with the scorching hot support of his “Hulkamaniacs”, to heights nobody thought possible. He transcended all mediums outside the pro wrestling industry and was a pop-culture phenomenon in his heyday. Hogan was instrumental in taking the professional wrestling business and pushed it to the stratosphere of the mainstream. As the cliche goes, love him or hate him, if there was a Mount Rushmore of pro wrestling, Hulk Hogan will definitely have his likeness among the greatest ever. His body of work in wrestling, is once again, contentious at best. But, some people might not know that Hogan extensively toured Japan in his younger years as well as his in his prime of megastardom. And, it’s a vastly different “Hulkster” from what we’ve come to know in the West. So, let’s take a look at Hulk Hogan in NJPW, New Japan Pro-Wrestling. 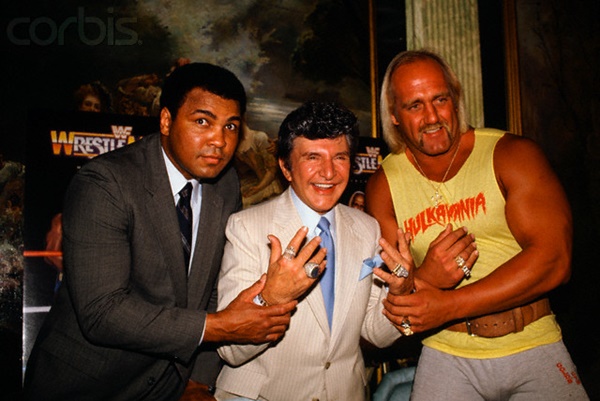 Hulk Hogan, for Western audiences, was known as the man who told everyone to say their prayers and eat their vitamins. He rallied his millions of “Hulkamaniacs” and he would draw power from their energy. Then, he would make his momentous comeback and decisively vanquish his opponent. For the majority of his time wrestling in WWE and World Championship Wrestling, Hogan was one of the most charismatic performers anyone has ever seen. That charisma pushed him to the top making him Vince McMahons’s prized asset. But, as far as wrestling technicality goes, it’s no secret Hogan’s wrestling style in the U.S. was not at all mind-blowing.

Hogan would get beaten down for the majority of the match’s length. Then, when it was time to make his comeback, he would “Hulk Up” and go on a rampage. As the match approached its climax, “The Hulkster” would employ very rudimentary wrestling tactics. It was basically the same match for decades. A fist-fight brawl, followed by a body slam and a few lariats. Finally, he would go for his ultimate weapon and finish off his opponent with the Atomic Leg Drop. His wrestling arsenal in his Western work was limited at best, and for good reason.

Hogan was already “over” with the fans despite his limited repertoire. Meaning, even though he was average at best in his wrestling prowess in the West, fans looked for more of a superhero than a professional wrestler in the 80’s and 90’s era of WWE. Hulk did not have to do more while wrestling in the West. Thus, he preserved his body while being the biggest star the sport has ever seen. But, in Japan? Hulk Hogan in NJPW, especially, is a totally different story.

Not many are aware that Hogan was trained by the legendary Hiro Matsuda. Matsuda was an inductee, in not only, NJPW’s “Greatest 18 Club”, which Hulk is also a part of, but also a WWE Hall of Famer in 2018. Furthermore, Matsuda trained the likes of the aforementioned Hogan and legends such as Scott Hall, The Great Muta, the late great “Mr. Wonderful” Paul Orndorff, and Ron Simmons to name a few. It’s no surprise that Hulk Hogan had more to offer in terms of ability than fans were lead to believe, considering who trained him. Hulk went up against the likes of The Great Muta, Genichiro Tenryu, Tatsumi Fujinami, and, the great Antonio Inoki in his time in Japan. Surprisingly enough, for most Western audiences, he more than held his own against Japan’s best.

He spent time in NJPW from the early to mid-80s as well as the mid-90s and briefly in the early 2000s. Hogan’s matches were more methodical and slow-paced. He resorted to mat wrestling more often than not in Japan as opposed to his brawling style in the U.S.A. His famous Atomic Leg Drop was absent from his arsenal, replaced in favor of “The Axe Bomber” crooked arm lariat when he was wrestling in Japan. It was jarring, to say the least, seeing Hulk Hogan in NJPW.

Japan altogether was a different animal for “The Hulkster.” Japanese audiences were more timid and calm compared to Western audiences. They really invest in the wrestling part of the performance rather than the entertainment side of it. Seeing Hogan actually getting technical was very surreal and amazing at the same time. Hogan respected the customs of Japanese wrestling. Thus, he showcased his above-average technical wrestling prowess to them to give back for their adoration.

Hogan achieved great heights in his time in NJPW. He was the first-ever IWGP Heavyweight Champion, in its original iteration, by winning the IWGP League Tournament in 1983. This was a title defended annually rather than a lineal championship, compared to the IWGP Heavyweight Championship we’ve come to know in the modern era. Nonetheless, he achieved this by beating Antonio Inoki by knockout using The Axe Bomber. making the finisher very notorious at the time.

As WWF Champion in 1993, Hogan made his way back to NJPW to set up a dream match between him and the then IWGP Heavyweight Champion Keiji Mutoh (AKA “The Great Muta”) where he ultimately defeated the future Japanese wrestling legend. To hype up the match, Hulk even said that he wanted to beat Mutoh in order to gain a shot at the IWGP Heavyweight Title. He believed that it was the richest prize in all of wrestling, as opposed to the WWF Championship which he referred to as a “toy” and a “trinket you put on a Christmas tree.”

According to former WCW Senior Vice President and Executive Producer Eric Bischoff, in his “83 Weeks” podcast, Hogan enjoyed his time in Japan. Hogan spoke glowingly of his time living there, as well as all the fond memories he had wrestling in the East. Bischoff claimed, to this day, that Hogan’s time in Japan always comes up and he doesn’t have a bad word to say about his time over there. A great little tidbit also came up: in Hogan’s WCW contract, it was stipulated he could wrestle and negotiate his own dealings with NJPW to his own accord independently. According to Bischoff, he was at a point in his career when he was already worn down, even though he intensely wanted to come back to Japan.

However, Hogan did have a brief stint in 2003, as previously mentioned, in NJPW. He beat Masahiro Chono at Ultimate Crush II in the Tokyo Dome. Jeff Jarrett in the early days of Total Nonstop Action Wrestling even assaulted Hogan in Japan. It was to be a setup for a match between him and Hulk for the NWA World Heavyweight Championship. However, with injuries creeping up to “The Hulkster,” the match ultimately did not happen. Hulk Hogan’s time in Japan is somewhat a memory lost in time, but’s definitely something worth checking out for all the wrestling historians out there. It was quite a dreamlike scenario that the mighty Hulk Hogan stepped on “The Land of The Rising Sun” and surprisingly excelled.

Stay tuned to the Last Word on Pro Wrestling for more on this and other stories from around the world of wrestling, as they develop. You can always count on LWOPW to be on top of the major news in the wrestling world, as well as to provide you with analysis, previews, videos, interviews, and editorials on the wrestling world.  You can keep up with the entirety of G1 Climax 31 and watch plenty more tremendous wrestling content from New Japan Pro-Wrestling on NJPWWorld.com; The King of Sports Streaming.