After the incredible success of Wrestle Princess last year, Tokyo Joshi Pro-Wrestling will once again put on the show for the second edition and it has one of the biggest cards the company has thrown together. Bringing in some big names from the freelance scene and putting on some great title matches, this show is not one to be missed. Here’s what to know heading into TJPW Wrestle Princess II. 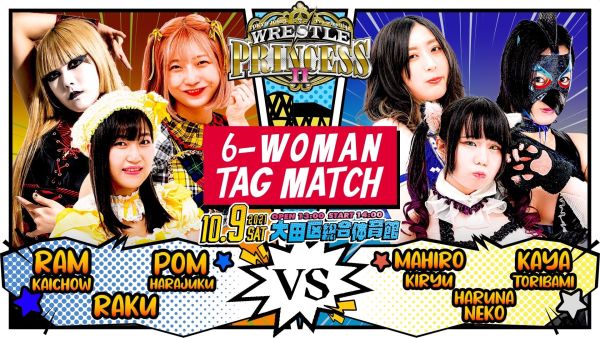 The TJPW Wrestle Princess II opening tag team match features some of the usual show openers but this is the first freelance name to pop up on the card: Ram Kaichow. For TJPW fans that have never seen Kaichow before, the Ice Ribbon/666 regular has a very standout look with her dramatic face paint which, paired with her brash attitude, makes her a dynamic partner for Raku and Pom Harukuju. This is an interesting team to put together and there’s no doubt that the internet will go crazy for them. Their opponents are just as exciting to watch, especially the newest rookie, Kaya Toribami, who has shown the most potential of any rookie in the company. With the freelancer Ram Kaichow making an appearance, it seems like her team will get the win. 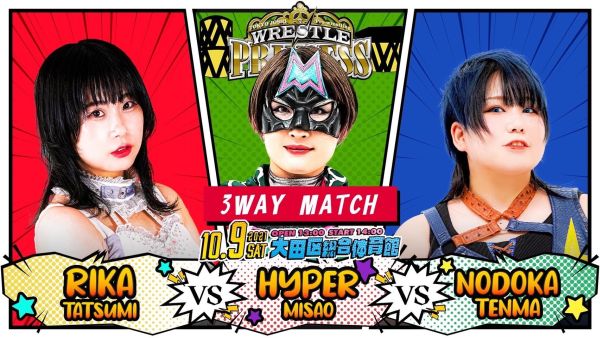 Rika Tatsumi missed some shows but will make her return in a fun triple threat match. The triple threat has been a staple of TJPW this year and has been a nice addition to the shows to fill in spaces on the card. Tatsumi, Hyper Misao, and Nodoka Tenma haven’t had much to sink their teeth into for the past few months, but these women work well together. Regardless of who picks up the win in this match, it’ll make a nice bridge heading into the middle of the card. 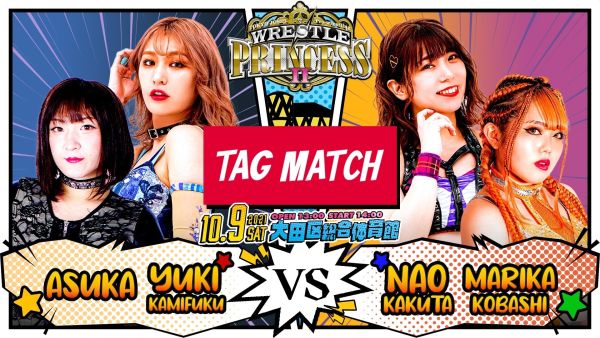 Yuki Kamifuku and ASUKA vs Nao Kakuta and Marika Kobashi

Another huge name making their debut in TJPW is ASUKA, one of the hottest stars in wrestling right now. They will be teaming up with Yuki Kamifuku to form the team known as ‘VENYU’, a combination of ASUKA’s American stylized name of VENY and Yuki of “Kamiyu’s” name. The team has been hyped with photoshoots and interviews, so it looks like they could be quite a permanent tag team heading into the latter half of 2021. Their opponents, Nao Kakuta and Marika Kobashi, have teamed up a few times, but they picked up a win against Hyper Misao and Kaya Toribami the last time they paired up. This should be an exciting match and it’ll be interesting to see how the real-life friendship between ASUKA and Kamifuku plays out in the ring. 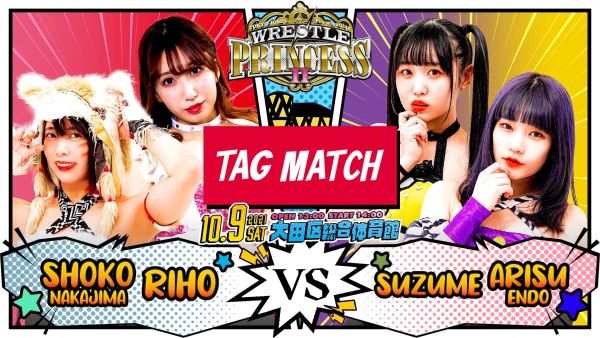 Riho and Shoko Nakajima vs Suzume and Arisu Endo

It’s been a while but All Elite Wrestling’s Riho returns to TJPW after two years to team up with Shoko Nakajima once again. The last time these two teamed up together, they were challenging for the Princess Tag Team Championship held by Mizuki and Yuka Sakazaki at the time. Suzume hasn’t been doing much since her former partner Mirai Maiumi left the company, but this will give both her and Arisu Endo a great opportunity to face two seasoned wrestlers. Undoubtedly, Riho and Nakajima will win in this one. 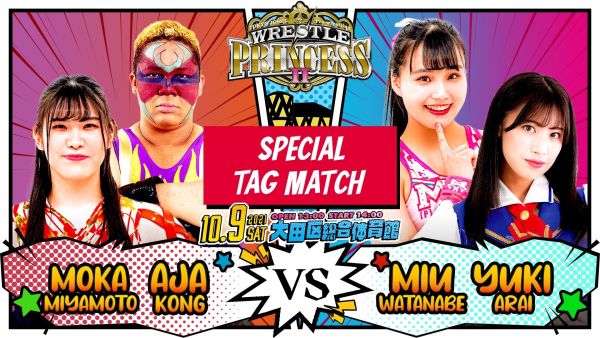 Aja Kong makes her return to TJPW to team with Moka Miyamoto, despite Kong saying she only shows up to hang out with Raku. Miu Watanabe was hyping this match up on social media by promising to lock Kong into the giant swing and throwing her around to showcase her insane strength. If she manages to pull this off, there’s no doubt that she will, once again, go viral. Adding Miyamoto and Yuki Arai to the match adds to what they can learn as wrestlers as there is no one better to be around than the legend Aja Kong. There is no question that Kong will get the victory for her team. 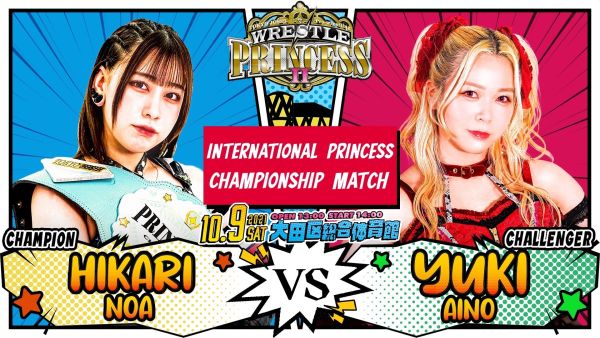 The first title match on the show features Hikari Noa making her third defense as International Princess Champion. Noa has had some solid defenses since she won the title from Yuki Kamifuku, and continues to prove herself as one of the top stars, not just currently but going into the future as well. She will face Yuki Aino, who is usually a tag wrestler will make for an interesting change, especially for fans that usually see her as a part of the BAKURETSU Sisters. They will be able to see that she is a strong singles competitor, which makes for another good defense for Noa. 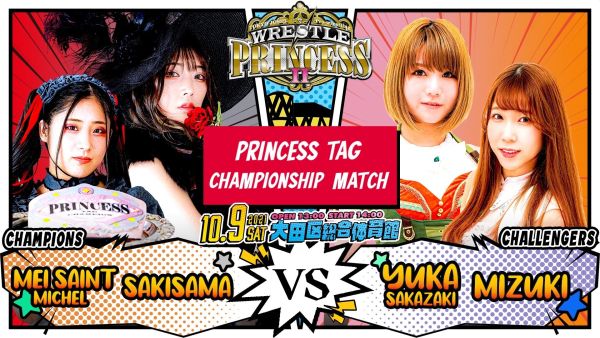 The Princess Tag Team Championship will also be on the line as Sakisama and Mei Saint-Michel look to keep their titles against Mizuki and Yuka Sakazaki, but that won’t be an easy task. Magical Sugar Rabbits have always been a strong force and continue to prove themselves not only as singles wrestlers but as arguably one of the strongest teams in the company. Sakisama and Saint-Michel have been just as strong since Sakisama returned from France alongside her new teammate, but the clock is ticking down and it seems like Sakisama is getting closer to returning, so maybe fans will see new champions being crowned. 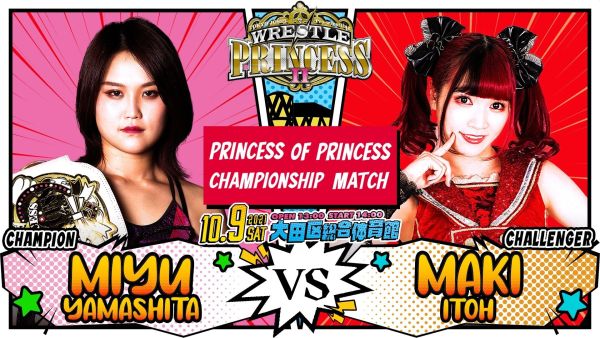 This incredible event will be capped off with Miyu Yamashita vs Maki Itoh, a match that has been built up for as long as “Itoh-chan” has been in TJPW. At the beginning of the year, during TJPW’s first big show on January 4, Yamashita managed to defeat Itoh, which lit a fire under the former idol to become even better. Itoh was determined to take down her close friend and tag partner. During this time, Yamashita won the Princess of Princess Championship while Itoh debuted in AEW and went on to win the Tokyo Princess Cup. There is a huge potential for this match to truly put TJPW on the map when it comes to international fame. Because of this, the Wrestle Princess II main event is a must-win for Itoh to close out this amazing story.