On Sunday night, WWE returns to PPV for the first time since SummerSlam. Extreme Rules makes its return to the schedule after being pushed back this year in favor of an earlier Hell in a Cell. The show has an odd card, much to do with the WWE Championship changing hands two weeks ago and the WWE Draft being right around the corner. It does not take away from the show, however, as there are a number of matches for fans to anticipate. Here are the Extreme Rules predictions and complete card for Sunday.

Becky Lynch is expected to compete in her first match since making her return at SummerSlam. Well, technically it is the second but the first lasted all of 26 seconds. This will be the real test as Bianca Belair comes in more game than she was when she was robbed of her SmackDown Women’s Championship. The last time Lynch spent a day as part of the active roster without gold around her waist was WrestleMania 35 in 2019. It’s been a bit. That alone pushes to the idea that Lynch will be keeping her “any means necessary” attitude. Belair has to be aware of that and not fall for Lynch’s tricks if she wants to be called champion again. “The EST of WWE” and “Big Time Becks” should put on a show Sunday night. 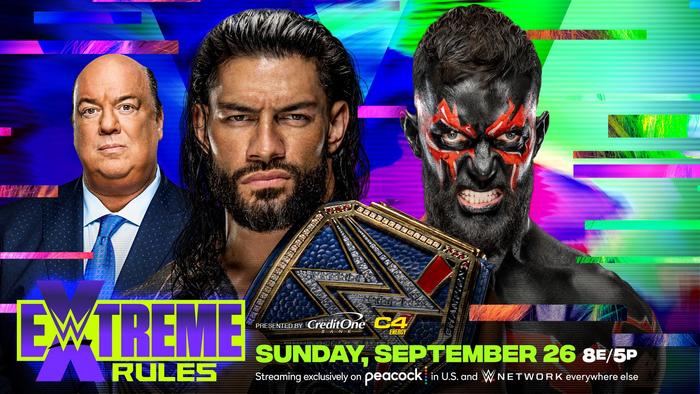 The never-ending Universal Championship reign of Roman Reigns has met another roadblock. That roadblock comes in the form of “The Demon.” Finn Balor‘s alter ego makes its return to the ring for the first time since WrestleMania 35. The intrigue comes in the form that “The Demon” has never lost since being a part of Raw or SmackDown. Balor has only ever lost dawning the paint at NXT TakeOver: The End against Samoa Joe in a Steel Cage match. Reigns has defeated everyone who has been placed in front of him. Edge, Daniel Bryan, Kevin Owens, and John Cena are the top names that have fallen victim to “The Tribal Chief.” Balor’s loss to Reigns came when the champion low blowed him on a kick out of the Coup de Grace, allowing Reigns to survive his title defense.

The unique aspect of this match is that it will be contested under Extreme Rules. That gives an uncertainty no matter the dominance of either man but should allow The Usos to get involved, something Balor needs to be prepared for. As have been most of the Reigns title defenses, this will be a must-see encounter. Reigns isn’t as much of a favorite as he has been throughout his entire reign, adding all the more interest to this one.