WWE has stacked the deck for their first Raw going head-to-head with Monday Night Football this year. It also could have a lot to do with the fact that AEW Dynamite beat Raw for the first time last week in terms of the 18-49 male demographic for viewership, but let’s assume it’s more so the NFL than anything else. The show will feature a WWE Championship match in the main event as well as an open challenge for the United States Championship. Here’s a look at the WWE Raw card for Monday night.

Damian Priest Welcomes Another Challenge For His Title

Damian Priest is adamant about being a fight champion, even if he has Sheamus breathing down his back heading into Extreme Rules. Priest will bring back his own version of the United States Championship Open Challenge once again Monday night and it could lead to nearly anyone answering the challenge. Someone like Jeff Hardy, John Morrison, or Karrion Kross fit the mold as to who could step up to the champion who plans to “live forever.” It should make or an interesting match on the show.

UPDATE: Jeff Hardy has accepted the challenge for tonight. 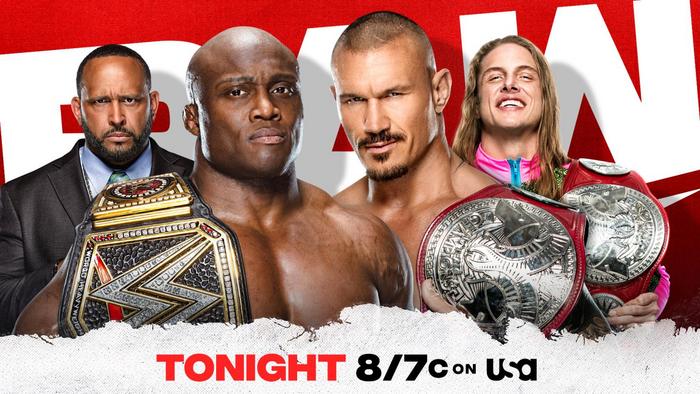 The planned match for Extreme Rules has been surprisingly moved up to Raw as Bobby Lashley will defend his WWE Championship against 14-time world champion and one-half of the Raw Tag Team Champions, Randy Orton. It began when Lashley decided that he wanted two titles, leading to him and MVP chasing after the Raw Tag Team Championship. When Orton and Riddle managed to retain, it was clear it was nowhere near over when Orton hit an RKO on the champion following the match. Lashley’s anger led to him accepting a match against “The Viper” which leaves us with this match Monday night. It will be the biggest threat to Lashley so far through his reign as Orton was the same man to defeat Drew McIntyre during his first reign a year ago. But that isn’t the only threat on the night.

.@WWEBigE has called his shot! 😮

Will he cash in his #MITB contract to become the NEW WWE Champion TONIGHT on #WWERaw?!

Big E has called his shot. To add some much-needed intrigue to Raw, he has revealed that he plans to cash in Money in the Bank in an effort to become WWE Champion for the first time in his career. With so many hoping to see this, many more eyes are likely to be on with hopes of Big E finally reaching the mountain top. It will be interesting to see if it comes true or if Big E is bluffing.

Stay tuned to the Last Word on Pro Wrestling for more on this and other stories from around the world of wrestling, as they develop. You can always count on LWOPW to be on top of the major news in the wrestling world, as well as to provide you with analysis, previews, videos, interviews, and editorials on the wrestling world. You can check out an almost unlimited array of WWE content on the WWE Network and Peacock including the WWE matches of the month for August.