The latest AEW rankings are live days after a newsworthy and game-changing All Out event. With new champions crowned, contenders falling, and new names joining the ranks, these updated rankings should begin to paint a clear image for what to expect in the coming weeks and hopefully gives an idea as AEW builds towards Full Gear.

After losing to Kenny Omega in the main event of All Out, Christian Cage has dropped down the rankings to number four. Not too shocking, as the loss in the title match will make it an uphill climb for him moving forward. Orange Cassidy returns to the top spot for the first time in a bit while Powerhouse Hobbs makes a surprising appearance at number two after defeating Brian Cage last week. Jungle Boy and Jon Moxley close out the rest of the spots in the rankings, respectively. 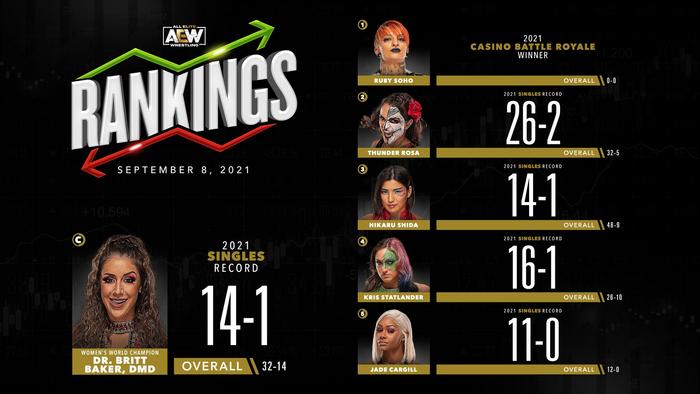 Well, that was fast. After winning the Casino Battle Royale in her first match as a member of the AEW roster, Ruby Soho has jumped ahead of everyone to the number one spot in the rankings. Her addition to the division as a whole is welcoming but her impact off the bat is something to keep an eye on. The rest of the field makes the most sense as Thunder Rosa continues to hover near the top with her impressive record, former champion Hikaru Shida still has yet to find someone who can beat her besides the champion, Kris Statlander falls after coming up short, and Jade Cargill‘s undefeated streak speaks for itself. There’s more to be excited about here than some think but it will take time to see who can actually dethrone the doctor. 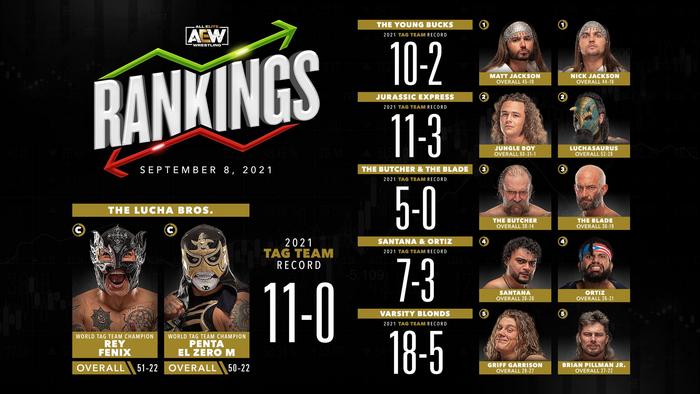 The Lucha Brothers have become the new AEW World Tag Team Champions, taking them from The Young Bucks. The big movers on this list besides the former champions are The Buther & The Blade as well as Santana & Ortiz. The Butcher returned Sunday and has instantly allowed their team to jump back in as the only undefeated team left in the division. Santana & Ortiz picking up a win over FTR last week has them in title contention for the first time in a while.