The National Wrestling Alliance‘s weekend won’t end with NWA EmPowerrr. One day following the promotion’s first-ever all-women’s event, the promotion in question will return to Chase Park Plaza for NWA 73. Celebrating its 73rd anniversary, the NWA has plenty of action set. In addition to an open challenge from one of the most prolific women’s wrestlers today, the main event will see the reigning NWA Worlds Heavyweight Champion defend his title against a man whose career is on the line. Needless to say, there is plenty to see and experience. Let’s run down the action set to take place this Sunday. 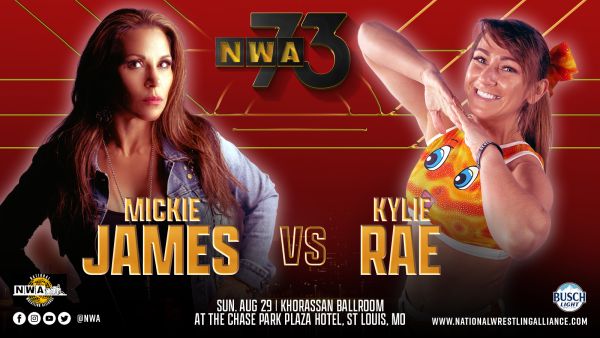 Between NWA EmPowerrr and the company’s 73rd-anniversary event, Mickie James has certainly kept busy. This past June, it was confirmed that the multi-time women’s titleholder would be competing at NWA 73, issuing an open challenge to any women’s wrestler looking to step up to the plate. James is an established name in professional wrestling, having won gold in IMPACT Wrestling, World Wrestling Entertainment, and beyond. As she approaches the latter years of her career, her goal shifted to shining the spotlight on women’s wrestling in both the NWA and abroad. To this end, she issued an open challenge, which was answered by “Smiley” Kylie Rae.

Having signed with the NWA in June, Kylie Rae’s exuberance is matched by very few. In addition to her continued work in the NWA, she can be seen wrestling for such promotions as Warrior Wrestling, where is the company’s reigning Women’s Champion. Rae is no stranger to success, though as of late, she has seemingly taken on a new edge. Despite maintaining her cheerful, upbeat demeanor, it has become evident to fans in attendance and at home that she will do whatever it takes to win. Needless to say, this killer instinct will make itself known come NWA 73. Tune in this Sunday as the NWA’s most promising stars goes head-to-head with a wrestling veteran. 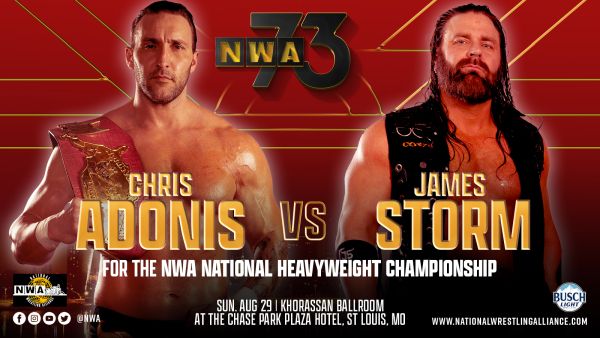 The Cowboy Returns at NWA 73

At NWA 73, National Wrestling Alliance fans will see the return of the “creek-swimming, moonshine-sipping, deer-skinning, beer-drinking, Johnny Cash-listening” James Storm. His last official NWA appearance took place on the January 26, 2020 episode of NWA Powerrr, which saw him and Eli Drake successfully defend the NWA World Tag Team Championship against The Bruisers. Since then, “The Tennessee Cowboy” has made appearances in multiple organizations, IMPACT Wrestling among the most prominent. Storm’s presence in the NWA has been sorely missed and it’s fair to say that he’s ready to make an impact.

This will be done, however, at the expense of the reigning NWA National Champion. Currently, in his second reign, Adonis has enjoyed considerable success in his short time with the NWA. In addition to being a 2x NWA National Champion, he found allies in Strictly Business. “The Masterpiece’s” confidence has been sky high and it shows few signs of fading anytime soon. It’s worth noting that these two last faced off in a three-way match, also featuring Fred Rosser, on the October 13, 2020 episode of UWN Primetime Live. Can “The Masterpiece” tap out the Tennessee-born wrestling veteran or will it be Storm holding gold, telling Adonis sorry for his damn luck? 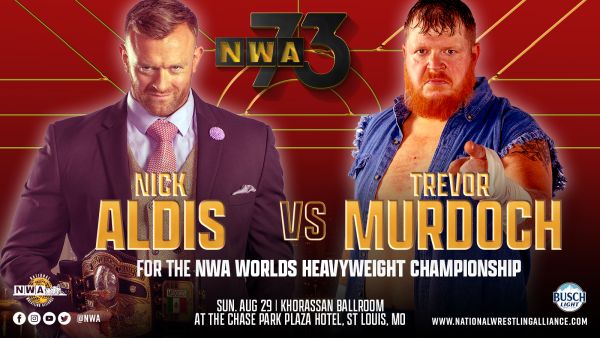 To say that it has been a challenging few months for Trevor Murdoch would be an understatement. The blue-collar brawler has repeatedly found himself in the crosshairs of Strictly Business, led by NWA Worlds Heavyweight Champion Nick Aldis. Murdoch endeavored to become the new titleholder. Aldis scoffed at this notion, believing Murdoch to be far from world champion material. Since late March, Murdoch’s luck couldn’t have been worse, from losing his NWA National Championship to Chris Adonis to being effectively cheated out of a world title victory at When Our Shadows Fall in May. Nonetheless, Murdoch remained steadfast, confident that, under the right circumstances, he could best Aldis.

Love him or hate him, Nick Aldis’s NWA Worlds Heavyweight title reign can’t be disputed. Across two reigns, he held the title for over 1,300 days; an impressive feat, to say the least. From Brian Pillman Jr. to Tim Storm to Ricky Morton and beyond, “The National Treasure” has faced and beaten everyone placed in front of him. With that said, Murdoch has never been more motivated, especially following his team’s victory at The Champions Series. This entitled him to a championship match; to the surprise of few, he selected Aldis and the NWA Worlds Heavyweight Championship.

Heading into NWA 73, the stakes couldn’t be higher. Not only is the “Ten Pounds of Gold” up for grabs, but to raise the ante, Murdoch’s future in wrestling hangs in the balance. The main event will be a Title vs. Career Match. If Murdoch wins, he finally achieves his goal of becoming the NWA Worlds Heavyweight Championship; if he loses, he must hang up the boots forever. Aldis’s path of dominance, whether with the assistance of Strictly Business or otherwise, could lead him to shatter Murdoch’s dreams once more. Fans may see a miracle this Sunday, however, ending with Murdoch winning his first world title.

Stay tuned to the Last Word on Pro Wrestling for more on this and other stories from around the world of wrestling, as they develop. You can always count on LWOPW to be on top of the major news in the wrestling world, as well as to provide you with analysis, previews, videos, interviews, and editorials on the wrestling world. NWA 73 can be seen on FITE this Sunday at 8 PM EST.