The AEW Rankings are once again live for this week as some massive movement has occurred in two divisions following week two of Fyter Fest. The women’s division has a new number one contender while the tag team division finally begins to heat up. Here’s what to know for this week’s updates.

The men’s rankings for this week saw minimal movement despite three competitors in the top five had matches. Jungle Boy, Darby Allin, and Orange Cassidy have all added to their win columns. Fight for the Fallen could dramatically shake up these rankings, however, as Hangman Page’s number one contendership is on the line when The Elite takes on Page and The Dark Order. 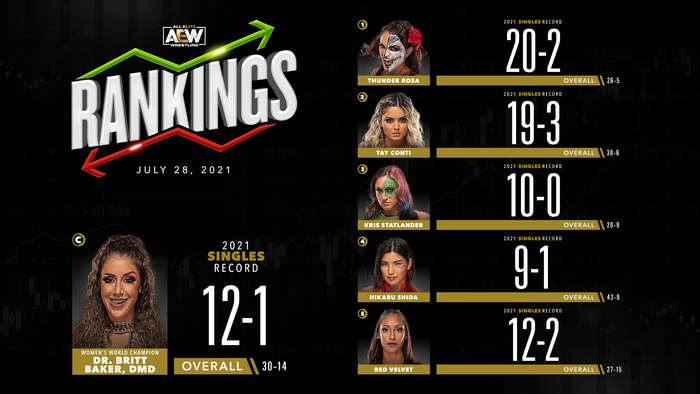 We have a new number one contender in the women’s division and it’s one the people have been waiting for. Just a week after officially signing with AEW, Thunder Rosa has claimed the top spot. The movement comes after Britt Baker successfully defended the AEW Women’s World Championship against Nyla Rose. Rose has fallen completely off the rankings, allowing Rosa to grab the top spot and setting up the potential rematch between Baker and Rosa at All Out. Red Velvet has jumped to the five spot as she remains constant with her record. Tay Conti and Kris Statlander also have jumped up a spot. 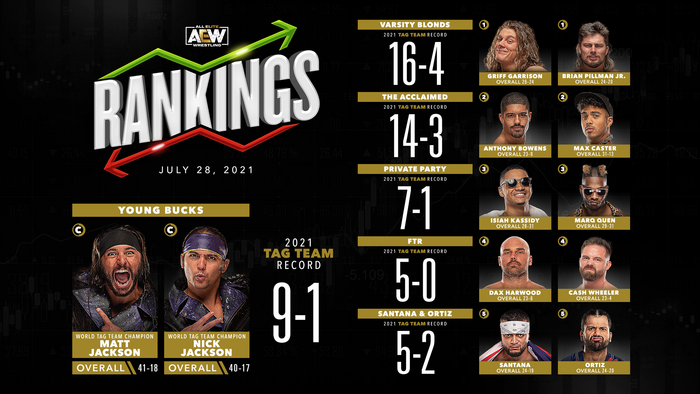 The team of Eddie Kingston and Penta El Zero Miedo are no more despite being the only team to defeat The Young Bucks. With the return of Rey Fenix, the Lucha Bros have re-entered the tag team ranks. Seeing they were the third team in the top five, this allows Private Party and FTR to move up a spot. To hype up Fight for the Fallen a little bit more, Santana & Ortiz have taken the five spot and would hop over FTR with a win in their massive tag team match.