This week’s edition of AEW: Dark Elevation will definitely be one for the record books. Hot off the heels of Road Rager, AEW has put together another show worthy of everyone’s undivided attention come Monday night. This edition marks the return of a very “Magical Girl” as well as the Elevation debut of a man who refuses to die and his legendary mentor. Also, the Women of AEW will definitely be show-stealers on this night as multiple women’s competitions will be on display on this momentous night for All Elite action, most importantly Yuka Sakazaki returns. This is just the tip of the iceberg as bouts upon bouts are sanctioned to showcase what All Elite Wrestling is all about. Without further ado, Monday is the Day, Youtube is the place. It’s time for another exciting edition of Dark: Elevation. Let’s run down the AEW Dark: Elevation card.

The number two ranked Tay Conti will be in action against a debuting Labrava on this week’s AEW Dark: Elevation. Conti is 18-3 so far in 2021 as far as singles action goes. Tay has been on a tear since debuting last year for All Elite Wrestling. Earning herself multiple Women’s Championship opportunities along the way. She is now on the cusp, just behind the number one contender Nyla Rose, in securing a date with destiny once more. Winning this match could prove to be crucial for Conti if she wants to ascend once more as a top contender for the AEW Women’s World Championship.

Across from her is a competitor who has worked so hard to get here in Labrava. Tay’s opponent has competed for notable promotions such as Coastal Championship Wrestling and Original Championship Wrestling in her time in the indies. Labrava will definitely seize the opportunity if things go according to plan. Will Labrava knock off a top contender in her debut or will Conti move to 19-3 in singles competition on this AEW Dark: Elevation card?

Yuka Sakazaki Returns And Putting The “Dark” In Dark: Elevation 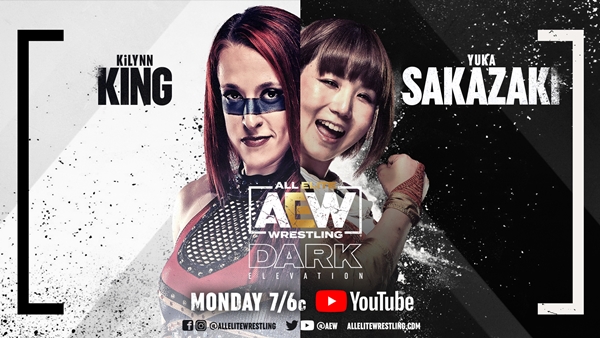 “The Magical Girl” Yuka Sakazaki will be making her return to US soil in her Dark: Elevation debut against a mastodon of a competitor in KiLynn King. Sakazaki has not competed for AEW in America since March of last year because of the global pandemic. She did however came up just a bit short in the Japan bracket of the AEW World Women’s Championship Eliminator Tournament against overall tournament winner Ryo Mizunami. The fan-favorite Joshi sensation will definitely be welcomed back with open arms as the AEW crowd will be in full force for her return.

Another amazing competitor will be making his Dark: Elevation debut against a submission savant in the form of Angelico. This competitor is known as Darby Allin. Ahead of his “Coffin Match” against “All Ego” Ethan Page, Darby will definitely release some pent-up aggression on the South African Submission practitioner. With the legendary icon Sting by his side, Allin will undoubtedly give everyone a night no one will soon forget in one of the high-mostly anticipated Elevation episodes since its inception back in March of this year.