One night following Fight Club Houston, Game Changer Wrestling will keep the action in Texas rolling. In its Dallas debut, the promotion will hold GCW You Only Die Once. The action will take place at the Irving Arena and for those that live in the area, this looks to be a show worth attending. As has been the case with GCW events in the past, it can be seen live on FITE as well. What should viewers expect heading into the show on Saturday? Let’s run down the full card and highlight a few key matches.

Full GCW You Only Die Once Card 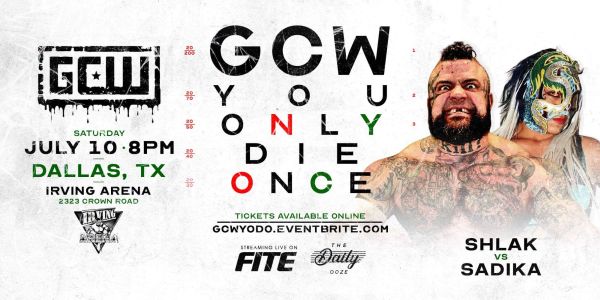 In the first match announced for GCW You Only Die Once, “Public Animal #1” does battle with a hard-hitting luchadora that made her GCW debut the night prior. At Fight Club Houston, co-held by GCW and Loko Wrestling, Sadika took on GCW World Champion Nick Gage in an incredible effort. If fans didn’t know who she was heading into that match, they certainly became aware of her by the time the closing bell sounded. Simply put, she’s an international dynamo that isn’t afraid to push the envelope if it means picking up the victory. Though she is still likely to be reeling from her showdown with Gage, Sadika will have to gather her bearings as she takes on her second challenge in GCW.

Enter SHLAK, who hasn’t been in a GCW ring since this past. During this month, at GCW Draft Day, he picked up a colossal victory over indie upstart Juicy Finau. For those that are unfamiliar with SHLAK’s approach, take a strength-based wrestling style and implement deathmatch elements; this is, more or less, what to expect from the tattooed monster from New Jersey. His accolades, in terms of deathmatch wrestling, speak for themselves. From Tournament of Survival to Nick Gage Invitational involvement, SHLAK is as dangerous as they come. If Sadika intends on leaving You Only Die Once with a victory, she will have to be at the top of her game. 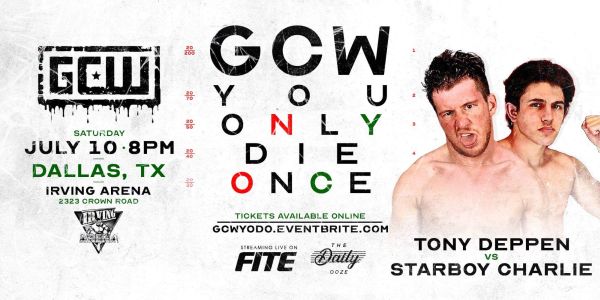 Nearly Two Years in the Making

It may surprise fans to know that Tony Deppen and Starboy Charlie haven’t shared a ring since 2019. In September of that year, they were part of a four-way match at West Coast Pro Wrestling‘s The World is Yours event; the match in question was ultimately won by current NXT Superstar Jake Atlas. Since then, Deppen and Charlie have taken separate routes. In the case of Deppen, Ring of Honor is where the lion’s share of 2021 was spent. He found himself with solid allies in VLNCE UNLTD, joined by Homicide, Brody King, and fellow GCW star Chris Dickinson. Furthermore, Deppen is the current reigning ROH World Television Champion, having won the title this past April from Tracy Williams of The Foundation. Needless to say, Deppen has proven himself as a force in ROH.

Meanwhile, Starboy Charlie created quite a name for himself in GCW and the independent scene as a whole. From Dickinson to Jimmy Lloyd to Lio Rush and beyond, Charlie has tested his mettle against some of the best GCW could find. He’s become such a fast-rising star, in fact, that it may not be much longer until he’s holding gold of his own. Charlie’s upcoming battle against Deppen, at GCW You Only Die Once, is one of the toughest challenges he’s faced yet. That said, if he can find an opportunity and capitalize on it, the young star may find himself the victor over a reigning titleholder. Keep your eyes peeled for this match; it won’t only display technical prowess but move at a rapid pace. 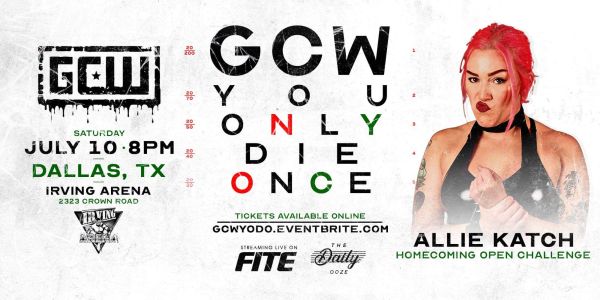 Adding an element of unpredictability to GCW You Only Die Once is the Allie Katch Homecoming Open Challenge. Born and raised in the Lone Star State, Katch began her career in her home state, wrestling for such promotions as Anarchy Championship Wrestling and WrestleCircus. From there, she created a name for herself across the country. This past April, the indie workhorse known as Allie Kat shed her established persona. In its place formed Allie Katch; no more whiskers, no more belly rubs. Under this new persona, her goal is simple: to show the world the caliber of wrestler she is, colorful, vibrant characters be damned.

Independent wrestling fans have taken notice of this new approach, too. Whether against such opponents as Allysin Kay at AAW Crush & Destroy or, more recently, Jimmy Lloyd at GCW Outlaw Mudshow, said approach illustrated a more aggressive side of the once bubbly pink-haired star. This bloomed into newfound confidence, as Allie Katch would invite anyone to face her, regardless of in-ring wrestling style or character. Enter the Allie Katch Homecoming Open Challenge; on July 2, it was officially answered by EFFY. Katch and EFFY are no strangers to one another, as longtime independent wrestling fans will attest. Simply put, as the unit known as Team BUSSY, they shook up the game. As such, expect them to take things to the limit at GCW You Only Die Once. 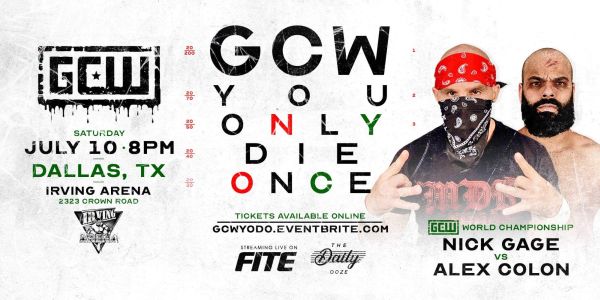 The Survivalist Meets The King

Last month, Alex Colon emerged victorious in the Tournament of Survival 666; this marked his history-making Tournament of Survival three-peat. Following his hellacious victory over fellow finalist Atticus Cogar, Colon took to the mic to celebrate. He would also draw his attention to Nick Gage, who was on commentary, to challenge him for the GCW World Championship. At GCW You Only Die Once, the main event will see Colon, the current and only GCW Ultraviolent Champion, take on Gage for the world title. As many longtime fans of the promotion will attest, a victory over “The King of Ultraviolence” is easier said than achieved.

To say that Nick Gage has had a busy 2021 would be an understatement. Whether against Mance Warner at Outlaw Mudshow, Sadika at Fight Club Houston, or his future encounter with Matt Cardona at GCW Homecoming, “The King” himself has welcomed all challengers. Since winning his second GCW World Championship from Rickey Shane Page this past April, Gage has been competing at that much higher of a level. At You Only Die Once, Gage will take on yet another tough challenger in Colon. As stated earlier, Colon is coming off his third Tournament of Survival victory. Can he keep the momentum going with a GCW World title victory? Tune in this Saturday to find out.

Stay tuned to the Last Word on Pro Wrestling for more on this and other stories from around the world of wrestling, as they develop. You can always count on LWOPW to be on top of the major news in the wrestling world, as well as to provide you with analysis, previews, videos, interviews, and editorials on the wrestling world. GCW You Only Die Once is set to air Saturday at 8 PM CST on FITE. Tickets for the event are also available via Eventbrite.

We Basked in his Glory: One Year on from Keith Lee NXT Unification
Dave Prazak Joins MLW To Spearhead Women’s Division