Greatest Matches in Raw History is our short series which looks at some of the arguable contenders for the distinction of “Greatest Match in Raw History”. With Raw a decades old show boasting well over 1,000 episodes, this is, of course, purely opinion based. Today, we take a look at one of the greats from the early periods of Raw’s Ruthless Aggression Era: the high stakes, Tables, Ladders & Chairs fatal four-way tag team match (dubbed “TLC 4”) between Kane (c), Bubba Ray & Spike Dudley, Rob Van Dam & Jeff Hardy and Christian & Chris Jericho for the World Tag Team Championships. October 7th, 2002. 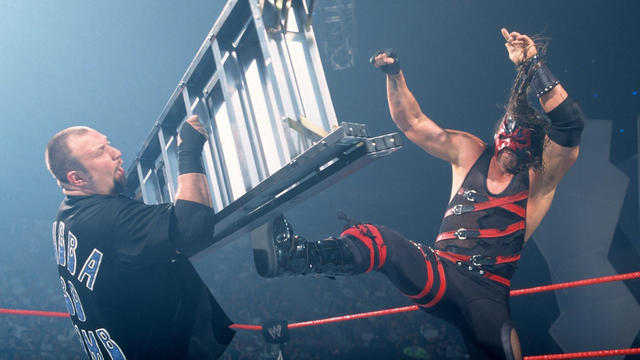 In the early days of the brand split, both Monday Night Raw and SmackDown made numerous choices to separate from each other tonally. Because of this, several ideas were pitched, greenlit and tested, one of which was “RAW Roulette”, a special edition of Monday Night Raw from Las Vegas with a roulette wheel determining the stipulations for certain matches. One such match being a four-way tag team TLC match, at a time when seeing such a match was a rare occurrence, and on free television no less. The tag team division on RAW, while certainly slapdash at the time due to being in one its many rebuilding phases, was certainly not wanting for talent, and this match is obviously no exception.

After the match was set, Chris Jericho and Christian attacked Kane’s then partner and co-champion, The Hurricane, backstage; incapacitating him and forcing Kane, who was arguably at his physical/professional peak at this time in his career – and was sitting as Intercontinental Champion and Tag Team Champion as well as preparing for a World Heavyweight Championship match against then champion Triple H – to defend the Tag Team Championships alone. Another interesting note on this match is Jim Ross, who was calling the whole thing alone, as his then-broadcast partner, Jerry Lawler, had left earlier in the night for storyline reasons. Jim Ross, who was in the later stage of his career at this point, did some of his absolute finest work in this match, and did so completely solo.

The match starts fast paced and wildly chaotic, with everyone pairing off with everyone else to brawl with them. Before long, Kane is dominating the match and clearing the ring of other participants single-handedly. From here on out, the 9 men go to more and more extensive lengths to try and incapacitate each other, most of which happens so fast that its virtually impossible to connect them in a way that makes sense narratively, so for the sake of simplicity and time, we will simply highlight some of the biggest spots of the match, in order as they happen, with as much information provided as possible.

Hopefully this has been helpful in understanding the layout of this match but in reality, much like all the early TLC matches from this time period, it needs to be experienced personally in order to be understood. It is a wonderfully chaotic match; a beautiful car crash that needs to be seen to be believed, and certainly deserves the time it takes for anyone with half an hour of spare time to go watch it. If you want to watch the madness that took place on that October 7, 2002 night, feel free to check out the TLC 4 linked at the top of the article, per WWE’s YouTube channel.