Tuesday night’s WWE NXT card could be even bigger than last week’s, which is saying something considering Karrion Kross defended the NXT Championship against Finn Balor. This week, the NXT Tag Team Championships are on the line and an opportunity at NXT TakeOver: In Your House is as well in the double main event. Here’s the preview for the WWE NXT card.

No. 1 Contender for the NXT Championship: Johnny Gargano vs. Kyle O’Reilly vs. Pete Dunne

A date with destiny. That is what is one the line for Johnny Gargano, Kyle O’Reilly, and Pete Dunne this Tuesday. Gargano’s last match saw him lose the NXT North American Championship to Bronson Reed in a Steel Cage match two weeks ago. O’Reilly has been on a small win streak since defeating Adam Cole at NXT TakeOver: Stand & Deliver, as wins against Cameron Grimes and Dunne’s stablemate, Oney Lorcan, have him on the up. And of course, Pete Dunne has been maybe the hottest competitor in the match with a determination to win the NXT Championship for the first time in his career. This match should be physical, a must-see, and rather excellent. 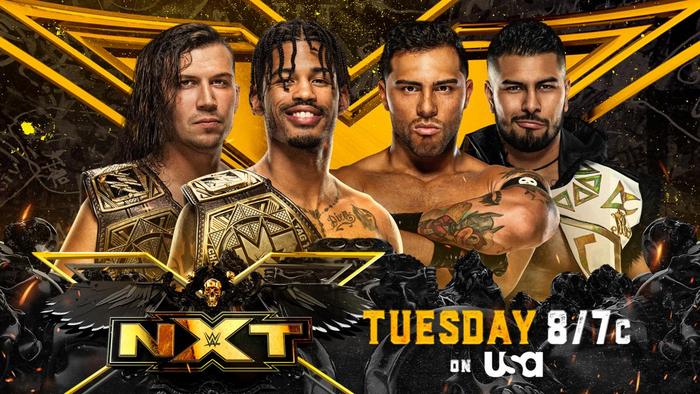 MSK will defend their NXT Tag Team Championships for a second time since winning them as they will face Legado del Fantasma‘s Joaquin Wilde and Raul Mendoza. The challengers have been on the top of their game as of late and earned this shot to try and take the titles from MSK. Nash Carter and Wes Lee will look to continue cementing their legacy in NXT with a huge win in what should be a fantastic match.