This weekday ChocoPro show is a one-match event, and despite only featuring one match, it’s fair to say that the participants involved will deliver. Whenever Gatoh Move Pro Wrestling holds a one-match show, said participants go all out, proving themselves within the confines of Ichigaya Chocolate Square and elsewhere. Furthermore, this particular show will serve as another chapter in a long-standing feud. Without any further delay, here is the action set for ChocoPro #120. 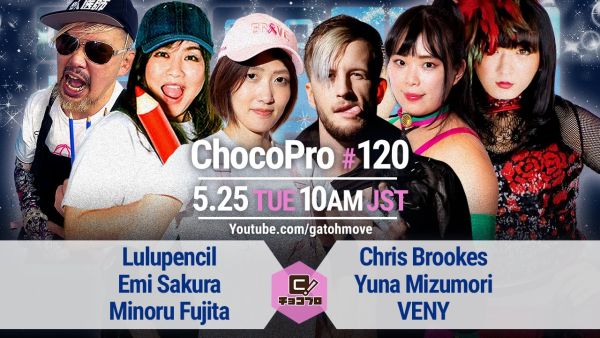 Piiiiii, Pi! Pi, Pi, Pi! In action, on ChocoPro #120, will be the three-member unit of Pencil Army. Led by Lulu Pencil, the commanding officer of the group in question, Emi Sakura and Minoru Fujita have been nothing short of supportive of their leader. Despite the group coming up short in tag team encounters, “Emi Pencil” and “Mino Pencil” have stuck by her side, believing that there would eventually be a light at the end of the proverbial tunnel. The same cannot be said, however, for their former teammate.

On ChocoPro #110, Chris Brookes, also known as “Chris Pencil” during this time, fought alongside his Pencil Army allies in a losing effort. Post-match, Brookes verbally lashed out at Lulu Pencil, announcing his departure from the group. This left a downtrodden Lulu Pencil behind, as she believed she lost a friend. From there, Brookes returned to his more nefarious ways in ChocoPro. Most recently, he battled Sakura on ChocoPro #115. This encounter devolved into chaos, resulting in Brookes storming out of Ichigaya Chocolate Square, the match in question being declared a no contest.

ChocoPro #120 will see Brookes reunite with Yuna Mizumori, reforming the unit known as TropiCalamari. “Yunamon’s” last ChocoPro appearance took place on episode #117, where she teamed with Tokiko Kirihara in a losing effort to the Asia Dream Tag Team Champions, Best Bros. Needless to say, Mizumori is looking to get back to her winning ways. Given the caliber of partner that Brookes and Mizumori will have, for this six-person tag team match, this may very well be a possibility.

Teaming with TropiCalamari will be VENY, also known as ASUKA to international fans. Known as “Japan’s first genderless wrestler,” VENY has taken the international wrestling scene by storm in recent years. American wrestling fans may know them best for their involvement in the AEW Women’s World Championship Eliminator Tournament, which took place earlier this year. Despite losing to Emi Sakura in the first round, VENY had a solid showing. It’s also worth noting that VENY the current SEAdLINNNG Beyond the Sea Champion, effectively making them the top star in the joshi promotion. Can VENY, who is no stranger to ChocoPro in their own right, make their return a win against the steadfast Pencil Army?