The collaborative efforts between Gatoh Move Pro Wrestling and Actwres girl’Z continue on ChocoPro #112. In fact, each match will feature one AWG wrestler in competition, each with their own unique approach. For fans of both shows, this should be an entertaining crossover. For those that have seen one show but not the other, expect interesting, entertaining matches all the same. Without further delay, let’s take a look at the action set to air on the official Gatoh Move YouTube channel. 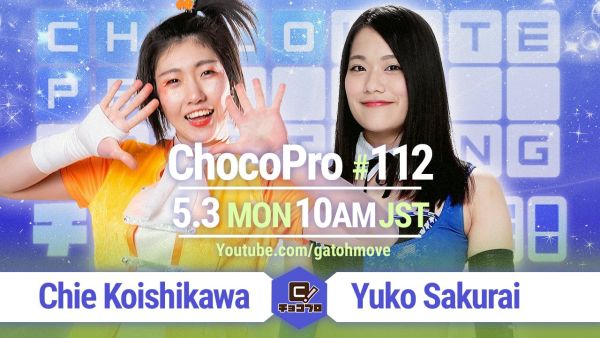 Last time, on ChocoPro, the AWG rookie Yuko Sakurai faced Tokiko Kirihara in the opening match. Though Sakurai put forth a valiant effort, it was “Otoki-san” that came away victorious. It’s important to note that Sakurai’s approach focuses on powerful offense, able to cut off the momentum of speedier opponents. Following a loss on the previous episode, can Sakurai pick up a victory over the most energetic star in Gatoh Move?

Last time on ChocoPro, Chie Koishikawa teamed with AWG’s Waka Tsukiyama in a match against the combined efforts of Sayuri and Emi Sakura. Koishikawa will enter this match having picked up a singles victory over another AWG star in Tsukiyama herself. Will lightning strike twice for “Too Much Energy?” Regardless, this should prove to be an entertaining opening match to tune in for. 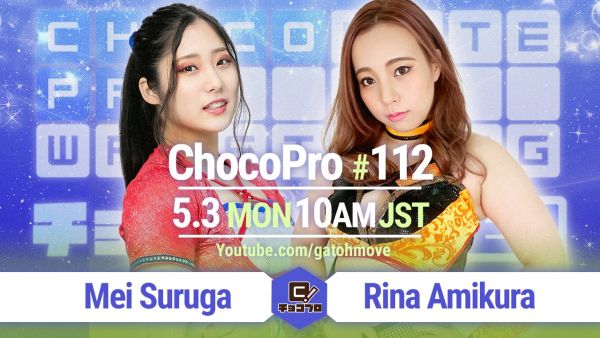 Often seen alongside Baliyan Akki as Best Bros, Mei Suruga will enter singles competition on ChocoPro #112. As one-half of the Asia Dream Tag Team Champions, one shouldn’t overlook her capabilities as a solo star. Whether against up-and-comers or established veterans, Suruga has proven her capabilities in a short period of time. Not unlike Koishikawa, “The Apple Girl” will enter this show prepared to take on another AWG star.

Rina Amikura began her professional wrestling career in mid-2018, debuting for AWG before appearing for Ice Ribbon, DDT Pro, and elsewhere since then. A gifted singer, Amikura’s dream is to become a music star. Not unlike Sakurai, she leans more toward a powerhouse style of offense, which makes her an interesting contrast to the speedier, wily “Mei-chan.” Can Amikura make her ChocoPro debut a success at the expense of the mischievous “Apple Devil?” 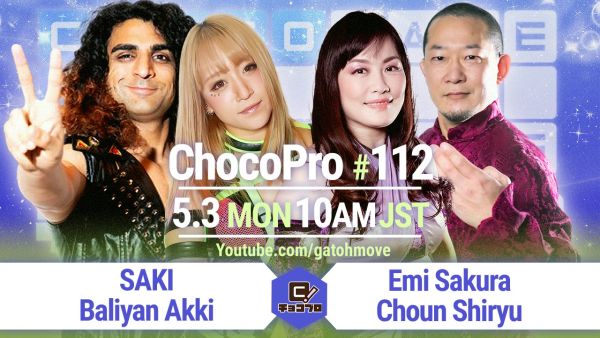 SAKI and Baliyan Akki vs. Emi Sakura and Chon Shiryu

Considered to be the top star of AWG, SAKI will be making her first Gatoh Move appearance since episode #91. On this episode, teaming with Yuna Mizumori to reform Tropikawild, SAKI bested Pencil Army‘s Emi Sakura and Lulu Pencil. In addition to being a prominent AWG and Colega Pro Wrestling talent, SAKI is accomplished in her own way. Not only is she the only three-time Asia Dream Tag Team Champion, but she is the current AWG Champion, having won the title from Miyuki Takase last month. In her ChocoPro return match, she teams with current Asia Dream Tag Team Champion, Baliyan Akki, who has been enjoying considerable momentum in his own right.

Together, SAKI and Akki will battle the combined forces of Emi Sakura and Chon Shiryu. As the founder of Gatoh Move, Sakura is nothing short of a ChocoPro veteran, most recently teaming with Sayuri to take on the team of Chie Koishikawa and Waka Tsukiyama. Meanwhile, Shiryu will be making his first ChocoPro appearance since episode #105 last month. On this show, the “Dragon” of Gatoh Move himself teamed with PSYCHO in a winning effort against Akki and Lulu Pencil. Needless to say, Shiryu is looking to pick up another win over Akki, no matter who the self-proclaimed ChocoPro “Ace” teams with. Expect this main event to be a competitive encounter.