As part of IWTV’s Showcase of the Independents, ACTION Wrestling is teaming up with Southern Underground Pro Wrestling to present Have Fun, Be Sad. The show will kick off at noon EST on Friday, April 9. Set in store for this show are a couple of multi-person showcase matches, an unsanctioned bout between Nolan Edward and Angelus Layne, and many other great contests.

Full Card for Have Fun, Be Sad 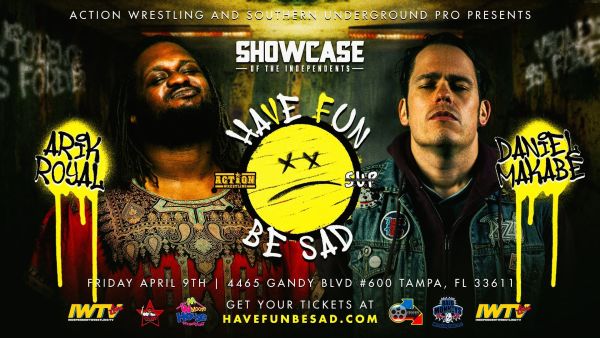 In a much anticipated first-time-ever encounter at Have Fun, Be Sad, Daniel Makabe will do battle with Arik Royal. The Vancouver-native mat specialist will have his hands full with the formidable Royal. On paper, it appears to be a style mismatch, but for a man of his size, Royal isn’t just a hoss fighter. Makabe will need to use his extensive wrestling knowledge to come up with the most effective strategy if he wants to fell this big foe. 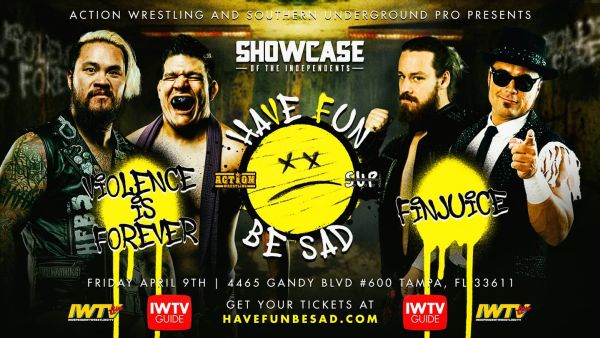 The lost art of great tag team wrestling will be found at Have Fun, Be Sad. The wrecking machine force that is Violence is Forever will collide with international stars David Finlay and Juice Robinson, FinJuice. This is another first-time-ever encounter. This match is likely made possible due to All Elite Wrestling “opening the forbidden door” by setting the precedent for contracted talent to appear with other promotions. FinJuice is the current IMPACT Wrestling Tag Team Champions after having defeated The Good Brothers. If you are a fan of tag team wrestling, this one is for you. 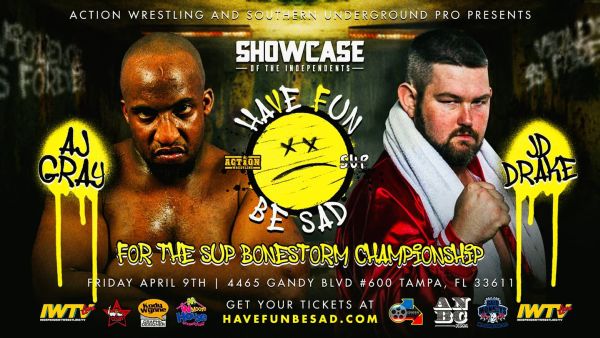 In a major hoss fight, AJ Gray will defend his SUP Bonestorm title against JD Drake. Drake is looking to break out as a singles star after the disbanding of his long-time team with Anthony Henry, The Workhorsemen. Recent appearances on AEW have gotten Drake some much-needed buzz and ending Gray’s 180+ day reign would only keep his momentum going. “Rich Homie Juice” certainly isn’t going to give up his title easily though, Drake is going to have to work for it.

Have Fun, Be Sad will air LIVE on IWTV. You can get five free days of an IWTV subscription using code ACTION.