Making A Classic is a series dedicated to delving into some of the all-time classic professional wrestling matches.  We will discuss the background, the match, the action, and hopefully be able to figure out what it is that makes a classic match.  In this edition, we take a look back at the most one-sided WWE Championship match in WWE history between champion John Cena and Brock Lesnar at SummerSlam in 2014.

Setting The Table: ‘The Franchise’ Is The Last Line Of Defense Against ‘The Conquerer’ 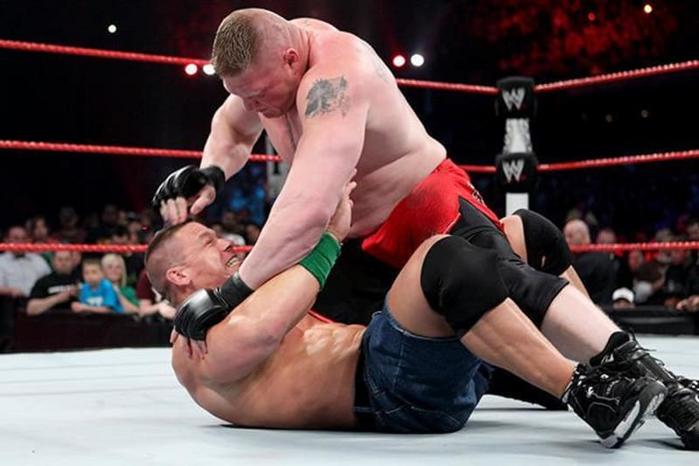 Defeating The Undertaker is no easy thing to do. Only two people in history have done it. But even more impressive is when you become the first man to do it. For 21 years, Undertaker faced opponents and knocked them down one by one to win championships, end feuds, and show his overall dominance in a historic way. 21-0. Never going to happen again. And at WrestleMania XXX in New Orleans, Brock Lesnar shattered in. While the build to the match was suspect, Lesnar had no problem as the most legitimate man Undertaker has ever faced to go in there and F5 away any hope he had at going undefeated forever. The looks on people’s faces can never be forgotten and it was the continuation of Lesnar finally finding his warpath in WWE that saw him as unbeatable.

On the other side of the ring was John Cena. Cena won the WWE World Heavyweight Championship at Money in the Bank after Daniel Bryan was forced to relinquish the championships due to injuries. This was his 15th run as the world champion, second only to Ric Flair in the history of professional wrestling. Cena was a certified legend, making it clear that “The Franchise” was established as one of WWE’s greats. So as always, “The Leader of Cenation” was pushed into a spot of having to protect WWE from the ultimate bad guy. And as JBL liked to call him, “Big Match John” was always up to the incredible challenge.

The stage was set. The man who defeated Brock Lesnar in his return to WWE would have to try and halt this meteoric rise to the gold. A rise that would be the final feather in the cap before Lesnar was simply unstoppable. And it would go down in the SummerSlam main event in 2014. 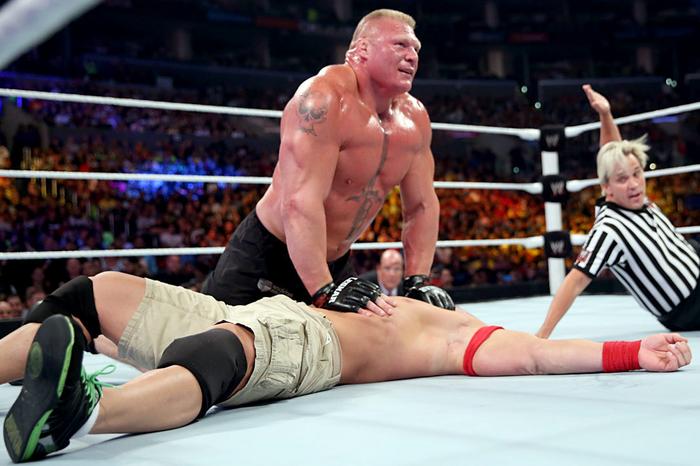 Big fight feel. That is what that main event felt like the night of. Lesnar was in the shape of his life as he walked down to that ring, confident as ever. This, after all, was his first match since shocking the world with his win over Undertaker. Cena was in a completely different mood as well. His anger was real. Cena didn’t play with the crowd, do any of his poses — nothing. He walked straight down to the ring with the titles around his shoulders ready for war. And so the match began.

Domination. That’s really the only word to use when describing it. Cena kicked the match off with a quick rush at Lesnar but was quickly caught with an F5, leading to a near three fall to stun the crowd. After this, Lesnar went into a methodical pace, picking apart Cena as an animal attacks his prey. Knee strikes and suplex galore in this one as Cena was ravaged in the middle of the ring like never before. It took three suplexes before the champion tried to storm back, but Lesnar quickly put that to rest.

It got to the point that the commentators were pleading with Lesnar to let the match end. Cena was getting devastated as the challenger hit nine straight german suplexes to Cena. However, “Big Match John” never ceases to amaze. He stormed back, hitting an Attitude Adjustment that got him a near fall of two. After that though, it sure felt it was over for the champion. Lesnar sat up and laughed in the face of Cena, seeming unfazed before going at him with devastating punches in a vicious ground and pound.

Words flew out of Lesnar’s mouth, which was pretty terrifying. “The Beast Incarnate” motioned at the referee to end it as he hit seven more suplexes on the champion. It was clear that Lesnar had all the confidence in the world but Cena had one final hail mary to try and save the day for WWE. The champion locked in the STF and wrenched back on Lesnar trying to get him to tap out and steal the match. Lesnar did not stay down.

He turned it into another beatdown and hit a second F5 to put Cena down for the three count, becoming the new WWE World Heavyweight Champion in the most one-sided contest in WWE Championship history at the time. But what made it more surprising was it was at the devastation of John Cena. It will be a match remembered forever.

The Aftermath: A Wrestling World Stunned — Lesnar Continues Domination For Years To Come 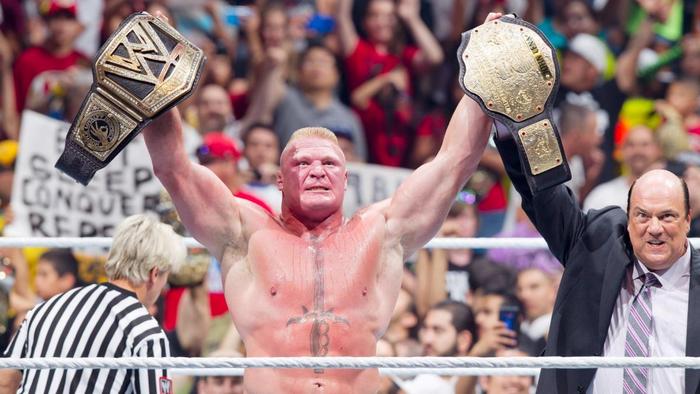 “The Beast Incarnate” was finally positioned as the final boss WWE needed to make future stars. This win over Cena gave him that power and started a six-year path of being the unstoppable force in WWE. Since that win over Cena, Lesnar has been champion for a majority of his matches since then. He is the longest-reigning Universal Champion in WWE history while also being the longest-reigning world champion of the modern era in WWE. The only men who have pinned him in matches since this bout with John Cena are as followed:

Goldberg, Roman Reigns, Seth Rollins (twice), and Drew McIntyre. That is it. Lesnar has been created to be this monster that very few have been able to defeat and simply the most dominant force in WWE history. When Cena was decimated on that night, no one had ever thought the dominance would be this immense. Brock Lesnar became the ultimate force in WWE history and that continues to this day.