If you think the previous edition of AEW Dynamite was hot, it’s about to get hotter with AEW’s “Beach Break”. Battle lines were drawn at last week’s show and things are about to reach their boiling point in a much-anticipated Special edition of AEW Dynamite. Fans will bear witness to a Wedding of a Lifetime between two lovers, their Bestfriend, and his new unwilling Butler. A bloodthirsty monster seeking revenge. Tag-team mayhem is about to ensue and possibly a Doctor about to taste her own medicine. The Main Event will be an all-out war between a Brotherhood and an Uneasy alliance with one common goal and retribution in their minds. It’s Wednesday and you know what that means. Let’s run it down:

(Murderhawk) Monster on the loose

After the events of last week, Lance Archer is out for revenge against Eddie Kingston and his Family. The Butcher, The Blade, and The Bunny went too far when they dragged Jake “The Snake” Roberts and held him on the stage. That momentary distraction cost Archer the match as The Bunny handed Kingston a knuckleduster and struck the Murderhawk landing the win. At Beach Break there will be nowhere to run or hide for Eddie. As the ring will be surrounded by a sea of AEW stars ensuring a one on one bout between the two. Will Lance give the beating that Kingston deserves or will “The Mad King” slither once again and somehow pick up the victory?

This Wednesday at #BeachBreak, a Tag Team Battle Royal for a shot at the #AEW World Tag Team Championships at #AEWRevolution will take place, and if the Young Bucks win – they get to pick ANY tag team to face.
Tickets for Beach Break are on-sale NOW at https://t.co/UN1cNj1kQq pic.twitter.com/PBhOfQhakf

Fans will be in for a treat as teams battle it out to see which team gets to challenge The Young Bucks for their World Tag-Team Championship. Another stipulation was enforced that if Matt and Nick Jackson happen to come out on top they will be the ones dictating who gets an opportunity to pry the titles away from them. Will it be a team from The Inner Circle which has the odds firmly in their favor? Or maybe a duo on the rise who wants to call their shot to try and win the biggest prize. It could be The Young Bucks coming out on top and handing The Good Brothers an opportunity. Whoever it might be AEW fans will be in for a wild ride as 10 teams fight it out. In what promises to be a fast and furious contest.

The Doctor is in (trouble)

Enough is enough as far Thunder Rosa is concerned. Dr. Britt Bake D.M.D and her cohort Reba has been relentlessly attacking Rosa over the past number of weeks. “La Mera Mera” is chomping at the bit to hand the Doctor a butt-kicking of a lifetime. After weeks of sneak attacks and cheap shots, Britt Baker hopes to do it again but this time decisively beating Thunder Rosa. Will Baker be able to survive by the skin of her teeth or will Rosa finally teach Britt a lesson in respect?

An “Elite” Brotherhood Vs An Unholy Alliance 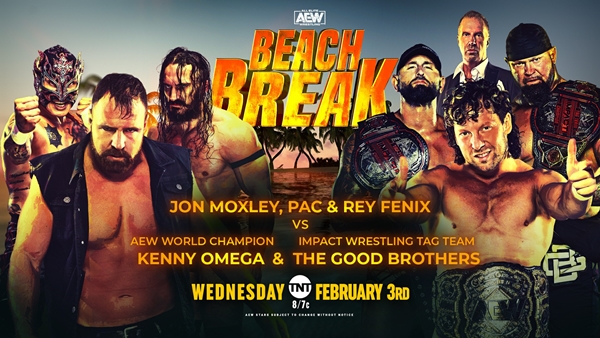 Kenny Omega and Jon Moxley have been at it each other’s throats for a while now. Ever since “Winter is Coming” where Omega stole the AEW World Championship from Mox tensions has been the highest they’ve ever been. “The Invisible Hand” Don Callis has been the catalyst of it all getting in the head of Kenny and advocating the new-found aggression of the World Champion. In all this, The Good Brothers have been at Omega’s side further feeding the champion’s ego and helping him dole out massive amounts of damage in the AEW locker room. The IMPACT Wrestling Tag-Team Champion will once again be backing up their friend in what’s sure to be an intense affair.

PAC and Réy Fenix is seeking payback for the actions of “The Elite”. For the attack on the third member of “The Death Triangle” Penta El Zero M putting him out of commission. The Bastard is also personally not having it anymore with these IMPACT Wrestling “outsiders” invading their company. He wants them out and will undoubtedly do anything in his power to do so. Jon Moxley is hellbent on getting his hand on Omega thus enlisting the help of two-thirds of Death Triangle. Will this Unholy Alliance get its revenge or will The Elite just tighten their grip over All Elite Wrestling?