Bound for Glory is in the bag and we not only have new champions to celebrate but a wedding as we finally see John. E. Bravo and Rosemary tie the knot on IMPACT!.

Only one match has been announced as of this writing but that doesn’t stop us from discussing the fallout of Bound for Glory.  The internet exploded amid rumors and speculation about some of their top stars, so let’s address these and see how the landscape has changed for IMPACT. 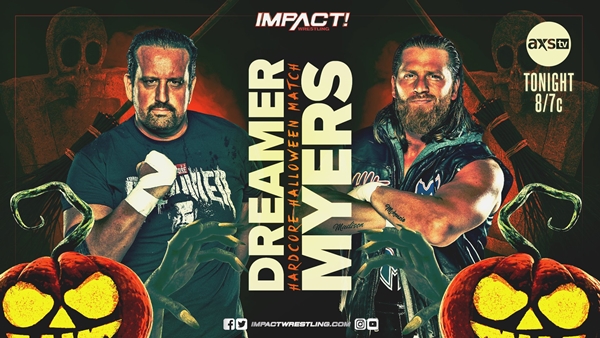 Our only announced match sees the rivalry between these two come to a head in a match that will favour the hardcore icon Dreamer.

Months in the making we will finally see Bravo and Rosemary get hitched on this weeks IMPACT.  Will this somehow tie in with the impending resurrection of the Sinister Minister Father James Mitchell?

Contracts, injuries and the future?

There have been multiple rumours on the back of Bound for Glory so let’s have a look at them one at a time.

Deonna Purrazzo is done with IMPACT?

This has been confirmed as 100% FALSE!  There was some speculation that her dropping the title to Su Yung was an indication that she was done with the company as it emerged, she had been wrestling without a contract.  Leave it to IMPACT to put one of their most contested titles on a non-contracted wrestler! Thankfully the news broke just before Bound for Glory at the build-up press conference that she has signed a long term contract with IMPACT and will be there for the foreseeable, it seems this was not picked up by the wider audience and led to a lot of undue speculation.

Alex Shelley is done with IMPACT?

This one is pretty unclear and is purely a rumour at this point.  The return of the Motor City Machine Guns has been one of the highlights of IMPACT in recent years but there are suggestions the reunion may be short lived.  He put on a tweet back on 27 August to former Time Splitters tag team partner KUSHIDA who is currently in WWE NXT stating:

“KUSHIDA, I am a free agent bro. Time Splitters challenge to Tyler Breeze and Fandango? In WWE NXT? Let’s go!”

As this tweet went out while he was still one half of the IMPACT Tag Team Champions its unclear if this caused a reaction backstage with IMPACT management but it had nothing to do with his limited involvement at Bound for Glory as apparently, he was already carrying an injury to his C4 and C5 vertebrae and the ambush is being used as a way to write him off TV and from upcoming bookings while he recovers.

However with rumours of a cruiserweight show coming to the WWE network soon and the draw of another potential Time Splitters reunion could we see him back on NXT in the near future?

It’s unclear if this will have any issues for current tag partner Chris Sabin who also works as a producer for IMPACT.  Given Sabin is a hugely successful singles wrestler and one of the legendary X Division pioneers, could we see him remain part of the active roster and go after Rohit Raju while Shelley recovers and decides his future?

Heath suffers a major injury at Bound for Glory?

The general understanding is that Heath was scheduled to win the Call your Shot gauntlet but his involvement was severely limited.  Initial reports suggested he suffered a torn groin which would have been a serious long term injury.  However it appears to be a hernia, while considered a minor injury he will still require surgery and will be off TV for the near future.  As a result Rhino ended up getting the victory to ensure he and Heath will remain part of the IMPACT roster going forward.

What happened with Kylie Rae?

The facts about this one are somewhat scarce, the limited information that has been found out backstage is that she was carrying an injury but the match was still going to go ahead.  So far it appears she no showed and was unable to be contacted for the duration of the show and worried IMPACT officials only found out after they went off air that she was ok.  This would explain the limited information made available on the night as they couldn’t exactly try and spin out a story line if something serious has happened to her.

Fans have been concerned with Rae’s mental health since her departure from AEW last year, in a similar situation she was booked in a match against Leva Bates at Fyter Fest but was replaced by Allie at the last minute.  It was then announced after the show that she had asked for her release.

Given the subject it is unfair to speculate, at the end of the day Rae is just 28 years old and has only been wrestling professionally for four years.  In that time she has rapidly climbed through the ranks of the independent scene and it may be a case of too much too soon as this was arguably the most hyped match of her young career.  If this is the issue hopefully as her employer IMPACT provide duty of care and ensure she gets whatever help and support she needs to get back on her feet as she has unlimited potential and the wrestling industry is better for her presence.

What else could we see?

Will Rich Swann make his first address to the fans as IMPACT World Champion?

The North are back on top of the tag division but how will the rest of the teams react?

After seeing off all contenders at Bound for Glory will anyone else step up to take on Rohit Raju for his X Division Championship?

After making their returns at Bound for Glory will we see more of James Storm and Shawn Daivari?

How will the Knockouts division look with Su Yung at the helm?

Tune in tonight to find out!