Bound for Glory is on the horizon as IMPACT Wrestling gets ready for its biggest show of the year. All the titles will be on the line in a STACKED card from top to bottom.  Let’s get to the good stuff! 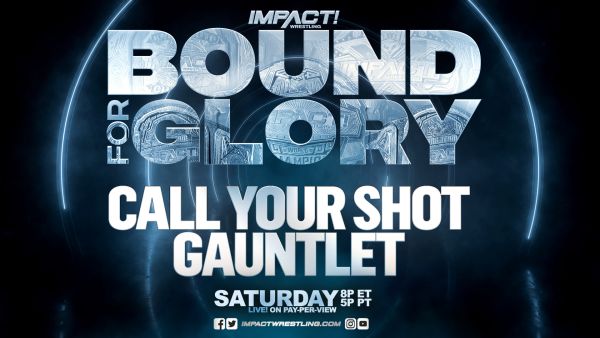 Bound for Glory 20-Person “Call Your Shot” Gauntlet Match: Acey Romero vs. Alisha Edwards vs. Cody Deaner vs. Brian Myers vs. Havok vs. Heath vs. Hernandez vs. Larry D vs. Rhino vs. Taya Valkyrie vs. Tenille Dashwood vs. Tommy Dreamer vs. TBD

The winner of this match will get to choose any championship match of their choice.

Extra stipulation – If Heath or Rhino win, then Heath will finally be awarded a full-time contract. However, if they lose, Rhino is fired.

This match has the potential to be a real treat. While it will certainly not be a technical masterclass, it could still be extremely entertaining.  So far, we know Rhino will have it all to do as he enters at number one, whereas Hernandez will have the best spot coming in last.

If you are unfamiliar with the rules, the match will start with two entrants. One by one, wrestlers will enter the match at set intervals. A wrestler is eliminated if they are thrown over the top rope until two participants remain.  At this point, they are deemed the winners of the gauntlet. The final two will face off in a traditional singles match, with the eventual winner receiving a title shot of their choosing.

With the participants announced so far, there is no one there that screams “World Title or X Division contender” which leaves the tag team and Knockouts division.  While the underlying story to all of this is the journey of Heath and Rhino, it feels like one of them needs to be involved in the final two, especially with Rhino’s career on the line. Thus, Heath may get the big win and repay Rhino’s faith in him and they go on to live happily ever after, challenging for the tag titles. It may also set up heartbreak, with Heath falling just short and letting his friend down, costing him his job.

Without the full lineup, it is hard to gauge or make predictions beyond what seems an educated guess. After all, we might get a new signing or returning roster member. If they don’t go the obvious route, it may be a Knockout. Tenille may get the win; she would be a great person to hold a title shot in the bag, building up to a rivalry with either Kylie Rae or Deanna Purrazzo. 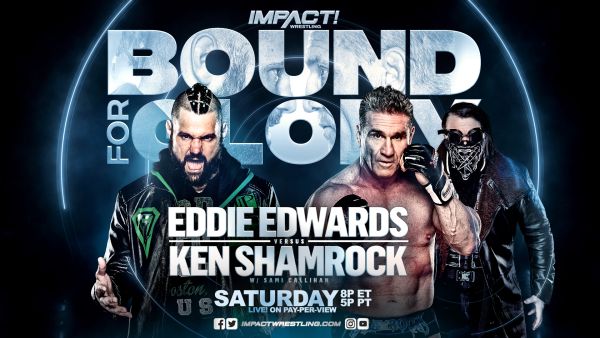 After losing to Sami Callahan on this week’s episode of IMPACT, Eddie Edwards will be fired up and raring for revenge as he goes one on one with Ken Shamrock.  Edwards would go after Callahan after the bell had rung, only for Shamrock to make the save.  So far, the last two weeks have seen Edwards on the receiving end of ankle locks at the hands of the UFC legend. Can he turn his fortunes around and get back to winning ways? Is this reignited rivalry going to be back for the long haul or will things be put to bed at Bound for Glory? 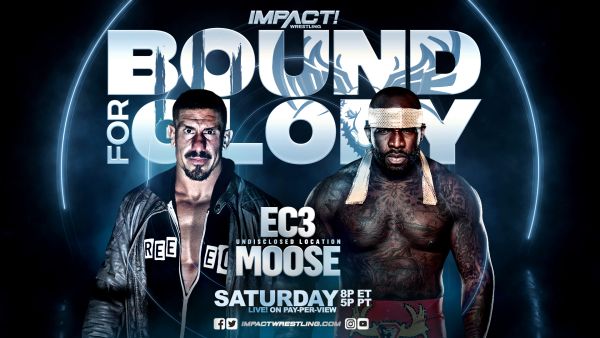 The match is to be held at an undisclosed location.

Since his much hyped unveiling at Slammiversary, we have yet to see EC3 in a sanctioned match in an IMPACT ring. Additionally, it looks like we might need to wait a little longer. For months, Moose has been hunting down the former IMPACT World Champion after being attacked all the way back in July. Finally, we will get to see these two go head to head.

While this shows all the signs of another cinematic style match, many people are just excited to see EC3 back in action.  It’s undeniable his tenure in WWE wasn’t what fans had hoped for after his previous outstanding run as part of IMPACT.  Now, EC3 is back in the company that built him as one of their faces for a new generation after the departures of the likes of AJ Styles, Samoa Joe and Kurt Angle. 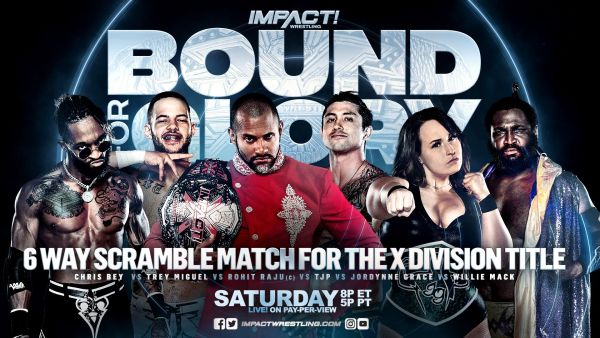 The X Division has been on fire since Slammiversary with multiple contenders continually trying to prize the best from reigning champion Rohit Raju.  The latest name has been Jordynne Grace, who will be looking to make history and become the first female X Division Champion.

It was at Bound for Glory 2019 when Tessa Blanchard competed in similar circumstances. She was involved in a ladder match for the X Division title against Jake Crist, Daga and Ace Austin. Ultimately, she fell short.

Chris Bey has been thirsting for an opportunity to get a rematch since losing the title to Raju at Emergence but has gone on to lose all three matches he has been involved in since that night.  On the other hand, Trey Miguel has been on fire, winning three out of his last four matches; that loss occurred against champion Raju after he won the number one contenders spot in a triple threat with TJP and Chris Bey.  Former champions Willie Mack and TJP will be desperate to ensure they are not forgotten in the mix. That said, getting the win in this one will be no easy task.

In a night of amazing matches, this is sure to be near the top of the ratings. It will be hard to call, but this is the perfect night for Trey Miguel to get his first taste of gold in IMPACT. 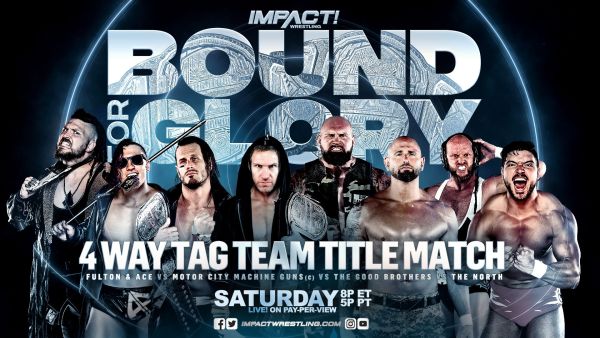 This is the one that has many fans out there salivating. These include die-hard IMPACT and indy followers who love The North, WWE fans eager to see The Good Brothers in a big match, and old school TNA die hards delighted to see MCMG back in action with the straps round their waist. This match has something for everyone.

For the last few months, the tag division in IMPACT has been making a statement, flexing its muscle for all to see.  While they operate with a much smaller roster than the likes of AEW and WWE’s various brands, there’s no denying they have opted for quality over quantity.

MCMG have been dominant since their return. However, The North and The Good Brothers have also been in great form with the two teams brawling it out to a no contest this week on IMPACT.  Meanwhile Austin & Fulton have struggled to find consistency but are certainly opportunistic and should always be considered a threat.

Many consider the arrival of The Good Brothers to IMPACT similar to that of FTR within AEW. In other words, it’s not a case of if, but when, they will win the tag team titles. The big question will be, can the rest of the tag division can stop them?

Can The North regain their titles?  Will MCMG continue their new lease of life? Could this be the night The Good Brothers truly arrive on IMPACT? Or will Austin & Fulton shock the world? 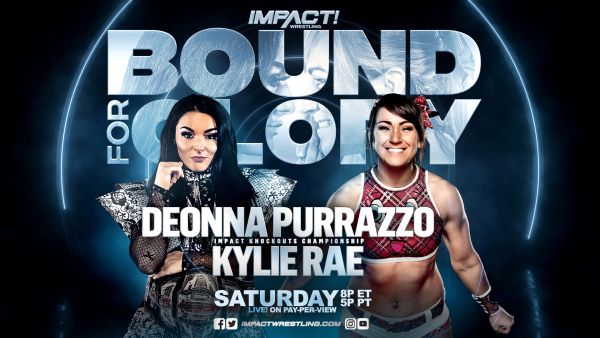 Not only is the Knockouts Title on the line, but we have two of the hottest commodities in women’s wrestling going head to head for the first time in IMPACT.

The two met in a tag match a few weeks ago. On that night, Kylie Rae walked out on the winning team. This is the only minor blip in Purrazzo’s IMPACT career, where she is currently undefeated in singles competition since making her return to the company back in June.

Kylie Rae will head into this title match in fine form. She has won the last eight matches she has been involved in since June. Furthermore, she is undefeated in IMPACT singles competition in 2020.

This one is simply too close to call. Both women garnered dedicated fan followings and either would be a worthy champion for IMPACT going forward. 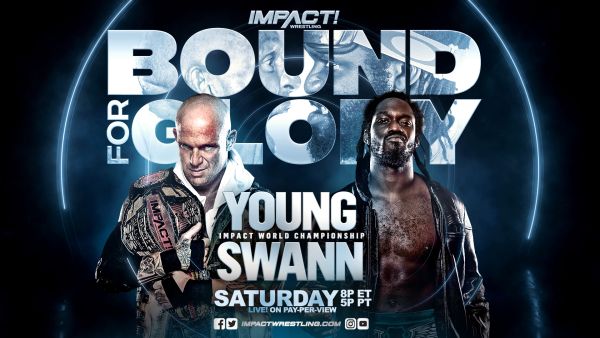 Since the moment Young returned to IMPACT he has been on a mission to end Rich Swann’s career, paving a path of destruction unlike anything the company had seen before. Swann has been out of action since Young appeared at Slammiversary but is now fully cleared to compete to take on Young for IMPACT’s biggest prize.  During that time, EY has picked up a win against Tommy Dreamer and Willie Mack as well as two wins against Eddie Edwards.

Young has taken his intensity and aggression to a new level. Therefore, he will be a tall task for Swann, who is sure to suffer from some ring rust after three months out injured.  Swann has been given a massive opportunity at IMPACT’s biggest show of the year, but can he step up to the challenge and secure his first IMPACT World Championship?

Bound for Glory: In Summary

IMPACT has done a great job since Slammiversary to build up to their next big show. It should draw in a lot of new fans with the card they have in place.  This has become one of the must-watch pay-per-views of the year and with IMPACT’s “less is more” approach to these shows will make the event feel more special.  Fingers are crossed that Bound for Glory delivers and IMPACT can continue to prove many of the doubters wrong and grow yet again.

Stay tuned to the Last Word on Pro Wrestling for more on this and other stories from around the world of wrestling, as they develop. You can always count on LWOPW to be on top of the major news in the wrestling world, as well as to provide you with analysis, previews, videos, interviews, and editorials on the wrestling world. IMPACT Wrestling Bound for Glory will air live on pay-per-view and via FITE.tv.