It’s the first episode of Dynamite in August and AEW has a big show planned to get the month started off right. Much of the tone of this week’s episode was set up last week as AEW’s July finale featured a brand new debut, the crowning of a new #1 contender to the world title, another Dark Order disappointment, MJF calling his shot, and the set-up for the debate of the century. These stories will all unfold as part of this week’s action as AEW Dynamite begins to gear up towards their next big PPV, All Out, in September.

Wednesday on Dynamite – The AEW World Championship is on the line as the challenger @DarbyAllin steps up to the champ @JonMoxley & @TheMattCardona makes his long-awaited AEW in-ring debut! 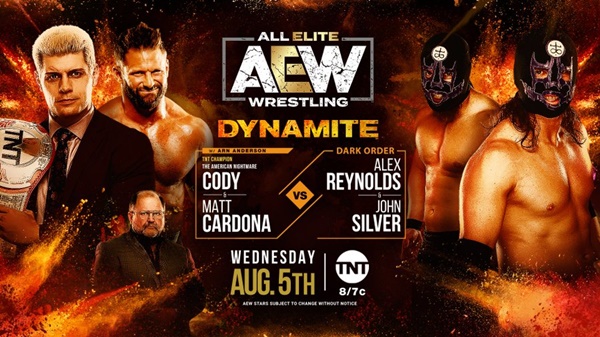 The past few weeks have seen many former WWE talent pop-up outside of Vince McMahon‘s empire. It started when FTR made the jump to AEW and followed when IMPACT Wrestling made a huge splash, bringing in EC3, Eric Young, Brian Myers, Heath, and most prevalent, the Good Brothers. On Wednesday, Matt Cardona became the latest such star to find a new home as the Strong Island Z made a surprise appearance in AEW to save real-life bestie Cody.

Following Cody’s TNT Championship match with WARHORSE, the Dark Order reared their ugly heads attacking the two as well as Arn Anderson. They looked to have the numbers advantage until Cardona emerged from the back and cleaned house. Cardona and Cody celebrated his arrival, but that was last week. This week, they’ll team up for the first time ever, in what also marks a rare week off for Cody from defending his title. They’ll face the worst of the Dark Order in the one-win John Silver and Alex Reynolds. With Mr. Brodie Lee‘s frustration on full display, Silver and Reynolds will be desperate to pick up a win this week on AEW Dynamite. 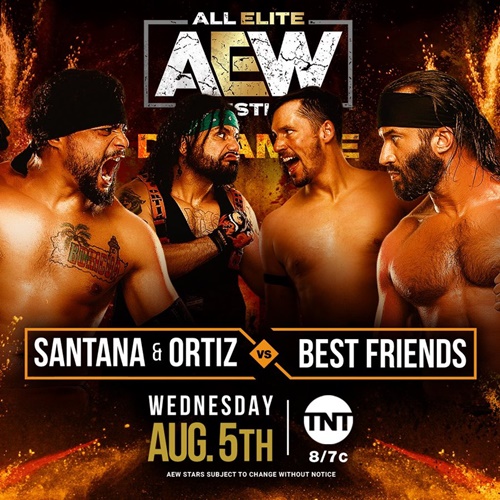 Playtime is over. After months of falling just short, the Inner Circle‘s resident tag team, Santana and Ortiz, picked up a huge win last week on DARK, defeating both SCU and Private Party in triple threat tag team action. In fact it was Santana and Ortiz’ biggest win in AEW to date, one that seemed to suggest the team was going to turn the corner and start making their way into title contention. But the following night on AEW Dynamite, Santana and Ortiz were on the losing end of a massive 10-man tag team bout against their opponents this week. Granted, the duo were largely protected as Inner Circle only lost due to interference from Matt Hardy who has his sights set on Sammy Guevara.

But that doesn’t mean Santana and Ortiz will take it easy on Best Friends. Not by a long shot. While Best Friends entered AEW with the reputation of being little more than a comedic tag team, their time with the company has turned that around. Trent and Chuck Taylor are former #1 contenders for the tag titles and have put on both entertaining but also highly athletic and skillful bouts since day one. And while the Inner Circle has been feuding with Best Friends and Orange Cassidy for several months now and while the two teams have shared the ring twice prior in four-way tag team matches, this week will mark the first time two of AEW’s best teams, Best Friends and Santana and Ortiz, will face off in traditional tag team action. There’s no doubt this will be one of the matches of the night. 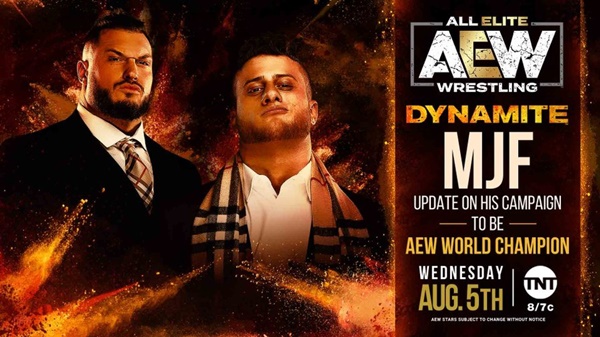 For nearly 10 minutes last week on AEW Dynamite, MJF took advantage of his platform to deliver a brilliant, eloquent and dynamic promo that was all geared toward verbally assaulting Jon Moxley and his championsip reign. MJF blasted Moxley for being a dictator and encouraged fans to use the hashtags he had been promoting on social media, #NotMyChampion and #WeDeserveBetter. He talked about how AEW promised change, how Moxley AKA Dictator Jon, promised a paradigm shift, and yet, it’s been more of the same. MJF remarked on how Moxley was nothing more than old guard, that he wasn’t the man who AEW needed to be in charge, but rather, that man was MJF. Referencing his famous “talent over tenure” promo, MJF promised that with him as champion, AEW would go from being “the alternative” to the pinnacle of wrestling.

And this week, he’ll have the mic again, to provide an update for his campaign, which you can learn more about at the official #MJF2020 website, maxwelljacobfriedman.com. It was announced after the show that MJF’s challenge to Moxley had been accepted and that the two would face off at All Out. And there is no doubt MJF will have more to say about that, especially as Moxley is set to defend his title before then and may not even be champion come September. 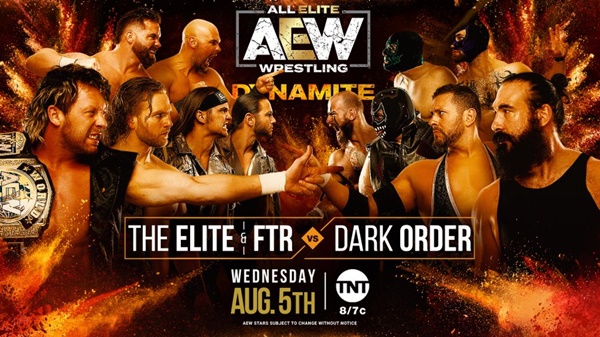 An epic 12-man tag is set for this week’s AEW Dynamite as the Dark Order and Colt Cabana, who likely doesn’t realize he’s part of the cult, will attempt to get a huge win over the reunited Elite and their perhaps surprising allies in FTR. It all started last week when following Evil Uno and Stu Grayson‘s loss in their tag team championship match against Hangman Page and Kenny Omega, a furious Lee showed up to lambaste his associates. Page took great pleasure in Lee’s frustration but Lee didn’t find things funny. Telling Page he had pissed him off for the last time, Lee suddenly found himself surrounded by Dark Order minions. The group made their way to the ring, leaving just Page, Omega and the Young Bucks.

For the second time in one night, the Dark Order expected to use the numbers advantage to their gain, and for the second time, an unexpected foe thwarted their plans as FTR attacked Lee with a cooler filled with ice. The Elite and FTR stood tall. This is a story of three teams all united by their hatred of the Dark Order. It’s notable though that this marks the second time the Young Bucks and FTR are on the same side of things, which could have some explosive results. There is still a lot about the Dark Order that is unknown but one thing is for certain, they’ll have the opportunity to stir up some trouble with surprises of their own on Wednesday night. 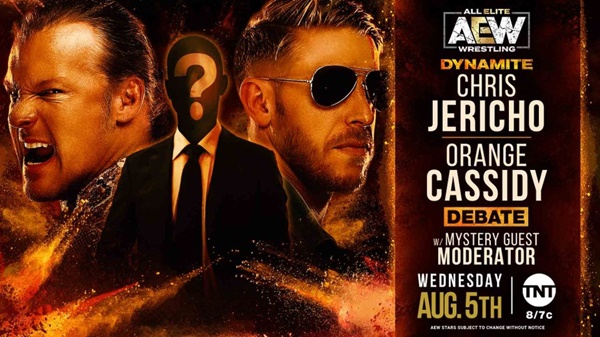 It’s 2020, meaning in a few months, there will be an election to determine the next U.S. president. So in addition to AEW maximizing on campaign season with MJF effectively running for world champion, this week will feature Chris Jericho and Orange Cassidy in a debate, which should be one for the history books. Jericho is a wordsmith and a masterful promo. He has been his entire career. He’s been in the ring with guys like the Rock and Stone Cold Steve Austin, going toe-to-toe with each and every one of them. But the Demo God has never faced a challenge like he will when he takes on Cassidy. A man of few words, so few he didn’t speak for the first several months of his AEW career, what Cassidy brings to this debate is an enigma. He’s someone who Jericho can’t possibly prepare for and that should be to Cassidy’s advantage.

The wildcard though comes in the form of who the debate moderator will be. Jericho has said the person will blow everyone’s minds, and spoilers have revealed that may well be the case. Either way, this moderator will have the tough task of determining a winner between the man who manages to say so much with so little and the man who could cut a promo on just about anyone or anything and make it feel passionate and believable. It’s not a match but this could be AEW’s best segment of the night and one that will definitely draw some quarter ratings. It’s all meant to set up their rematch next week, which will definitely win the Wednesday night demo.

Last week’s tornado tag match between Jon Moxley and Darby Allin against Brian Cage and Ricky Starks had everything you would have expected. Allin and Moxley as a team was a recipe for chaos and the match had it’s share of that, with huge spots including a skateboard covered in thumb tacks that was jammed right into Starks’ back. The just under seven minute fury of a match ended with Allin and Moxley on top and as many expected, it was all meant to set up a title match between the two, which is a rematch from November, 2019 when the two devil-may-care wrestlers met for the first time ever.

The 23-year-old Allin is someone who wrestles with the same level of reckless abandonment as a young Moxley did in his early career. And while Moxley is still capable of the hardcore and danger-defying spots, no one in AEW is as much of a risk-taker as Allin. The similar styles led to these two having a great match in November, one that Allin almost won. But in the end, it was the undefeated Moxley who came up on top. To this day, Moxley is still undefeated as he has been an incredible draw for AEW. But someone is bound to give Moxley his first loss and perhaps that man will be Allin. Either way, all eyes will be on this one, including MJF’s, who no doubt will want to get a look at the man he’ll be facing for the title at All Out.

Programming note: Starting with the August 19th episode of AEW Dynamite, which will air on August 22nd instead due to TNT airing the NBA playoffs, there will be three episodes of Dynamite in August/September that will air on different dates/time slots. Make sure to set your DVR in order not to miss any of the action!