Game Changer Wrestling returns for Part 2 of their two-night Homecoming extravaganza, which sees GCW host live pro wrestling on the historic Garden Pier on the Atlantic City boardwalk. Part 1 was already an amazing line-up, with Part 2 following up with a lot of the same faces in new match-ups. Both nights are airing live on FITE.tv, with Part 2 kicking off on Sunday, July 26, at 5pm EST. Each night is $13.99US or you can get a Weekend Pack for only $19.99US. 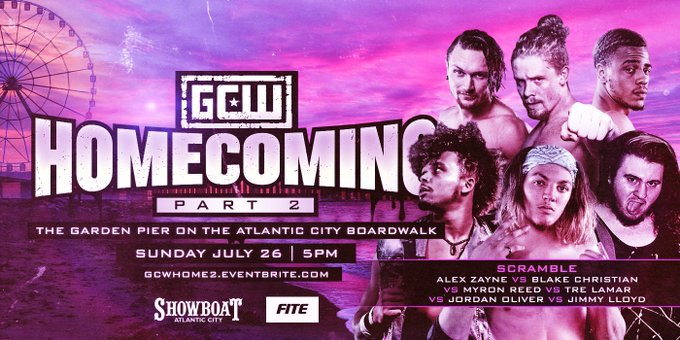 GCW’s brightest stars combine for an amazing scramble match as only GCW can do. Alex Zayne and Blake Christian enter the Scramble match after another classic on Saturday that saw Blake Christian go up 2-1 in their singles encounters, while both members of Major League Wrestling (MLW)‘s Injustice, Jordan Oliver and Myron Reed, face off again after Saturday’s opening round of the Synergy Garden State Invitational. Tre Lemar lost a hard-fought contest against ACH but will look for redemption, while GCW’s “Different Boy” Jimmy Lloyd will look to do better in his second straight Scramble match after losing out to Calvin Tankman on Saturday. 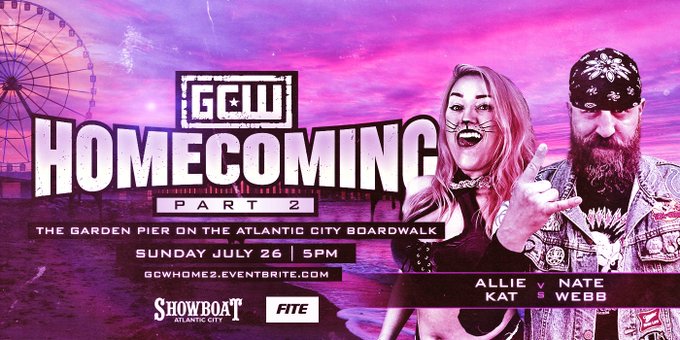 Allie Kat also lost out on Saturday in her Scramble match to Calvin Tankman, while Nate Webb lost to EFFY, so both competitors will be looking for the win to keep their momentum going. Allie Kat has faced most of GCW’s toughest competitors in the past year and looks to keep going as the new Deathmatch queen when she faces Nate Webb in singles action. 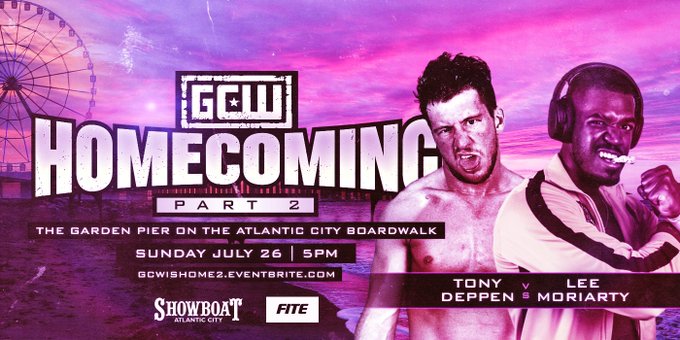 While GCW Gatekeeper Tony Deppen didn’t work Homecoming’s first night, he defeated Gregory Iron, KTB, and Jordan Oliver to win the Synergy Pro Garden State Invitational on Saturday night. He returns to GCW on Sunday night to face someone destined to be a standout with GCW for years to come in Lee Moriarty, a rising star from Pittsburgh who faced (but lost to) Chris Dickinson on Friday with Paradigm Pro and then lost to Calvin Tankman in Saturday’s Scramble on night one. Moriarty is a marvel to watch, and against Deppen expect a darkhorse candidate for match of the night. 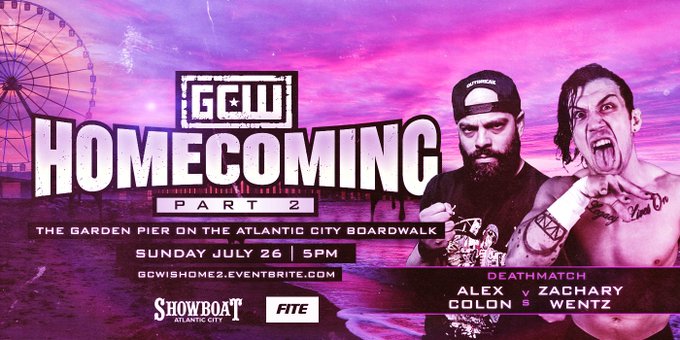 Alex Colon is heading into another deathmatch following a hard contest against AJ Gray on Saturday, and on Sunday his opponent is IMPACT Wrestling‘s Zachary Wentz of the Rascalz. Wentz comes from an MMA background and has been looking for a deathmatch for a while now, and now on Sunday, he’ll be facing one of GCW’s best deathmatch wrestlers. 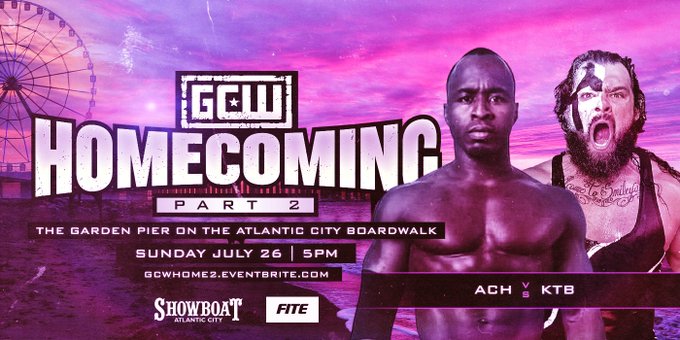 ACH made his GCW debut on Saturday, facing a future star in Tre Lemar, but on Sunday he’s facing a former GCW World Champion in KTB. A complete switch in styles from his first day, but don’t underestimate KTB’s athleticism. 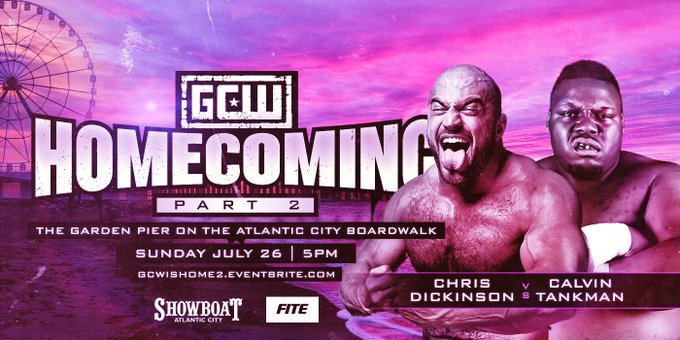 On Saturday, Chris Dickinson defeated Mance Warner, while Calvin Tankman emerged victorious from the Scramble. On Sunday, both these fierce men will face off in singles action. It’ll be their third match of the weekend so far, as Dickinson faced Lee Moriarty on Friday at Paradigm Pro, while Tankman faced “Filthy” Tom Lawlor at the same event. But these two hosses won’t be slowed down for this hotly anticipated match-up. 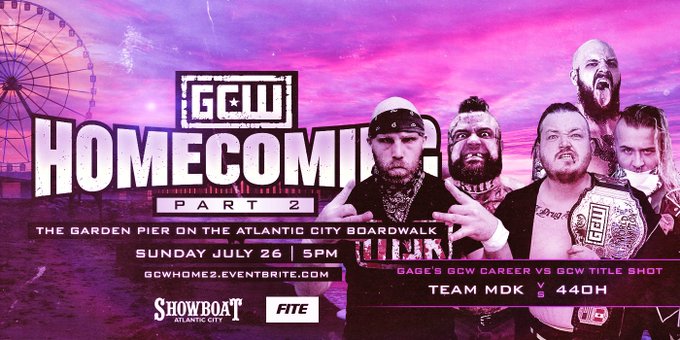 The mind games between Nick Gage and GCW World Champion Rickey Shane Page continues. On Sunday Nick Gage will be teaming up with SHLAK to face Page and his 44OH cronies, Atticus Cogar and Eric Ryan. If Gage wins, he’ll get another shot at facing Page for the GCW World title, at any time Gage wants. But if Gage’s side loses, his career in GCW will be over. This is going to be a bloodbath. 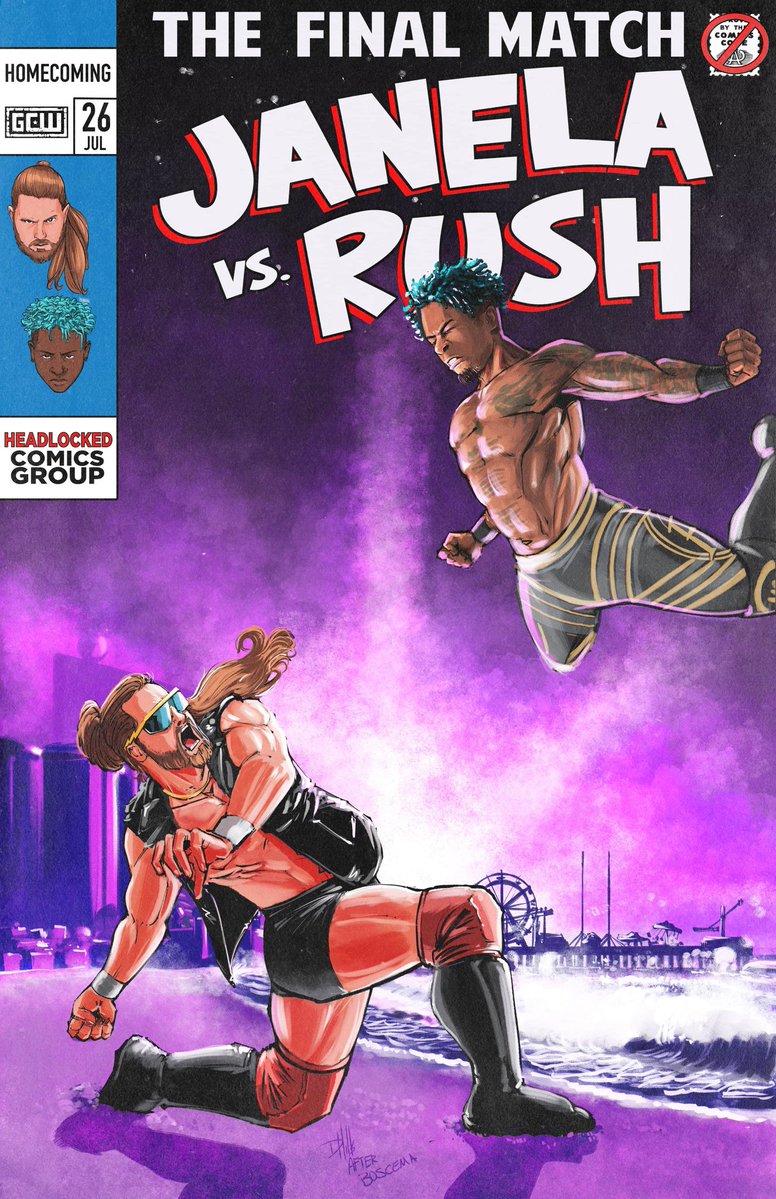 Following Joey Janela’s huge upset over Yoshihiko for the DDT Ironman Heavymetalweight Championship on Saturday, he was attacked by former NXT Cruiserweight Champion Lio Rush, setting up a match-up on Sunday in what Lio is calling “The Final Match”. Could this really be Lio’s final wrestling match (he’s teasing retirement lately to focus on other projects) or will this re-ignite his fire for pro wrestling again.

Stay tuned to the Last Word on Pro Wrestling for more on this and other stories from around the world of wrestling, as they develop. You can always count on LWOPW to be on top of the major news in the wrestling world, as well as to provide you with analysis, previews, videos, interviews, and editorials on the wrestling world. GCW Homecoming Nights 1 & 2 will air live on FITE.tv, but you can also watch back catalog on IndependentWrestling.tv (IWTV).