Whilst the eastern states of Australia seemingly slide back into a second wave of COVID-19, and lockdowns, wrestling is set to return in a big way in South Australia. On Friday, July 24, Wrestle Rampage will Re-Emerge from their hiatus with a stacked card emanating from the Lion Arts Factory in Adelaide for Re-Emerging 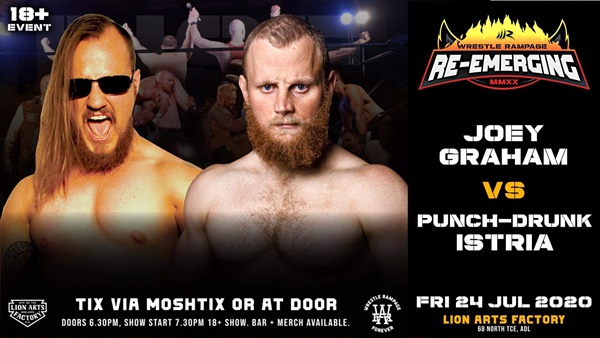 Prior to the shutdown of the Australian scene Graham’s group, the Renegadez, made a big play to tear down Wrestle Rampage and build it back up based on their vision. This process has caused chaos within the company, but stalwart Punch-Drunk Istria is itching to bring some stability back.

This Friday Istria will battle Graham to do just that.

Since returning to Wrestle-Rampage after a self-imposed sabbatical Graham has been unstable, going undefeated so far. This Friday he will face his stiffest challenge yet when he takes on the former Australian National Champion.

Expect a rapid and violent encounter between these two men, who are two of the best to come out of the Wrestle Rampage dojo!

Unfortunately due to NSW and SA border restrictions not being lifted, @stephdelander will be unable to appear at Re-Emerging.

Lily Blaze (@random_trainee) is still scheduled to appear and will officially join the @WRAustralia roster on July 24th! pic.twitter.com/qk6MVrYKgH

Originally Lily Blaze was scheduled to make her in-ring Wrestle Rampage debut against the ‘Python Powerhouse’ Steph De Lander. However, due to travel restriction between New South Wales and South Australia De Lander has been left locked out of the state and thus unable to compete on Friday.

Despite this Blaze is determined to still make her debut on Friday and will be facing an as yet unknown opponent. Who will answer the call of the youngster? 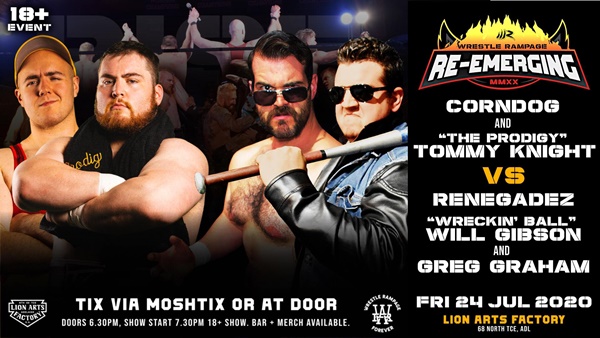 Back in January the Rengadez made an immediate impact in Wrestle Rampage by attacking Australian National Champion Rat Daddy, Tommy Knight, and Hartley Jackson.

Then again at Carpe Diem the Renegadez continued their dirty sneak attacks, but were thwarted by Corndog who joined the fight in support of Knight.

Since then the factions within the company have seen the tensions continue to simmer without opportunity for release. On Friday these tensions are set to boil over when these two teams clash in heavyweight tag team action.

Will the duo of Corndog and Knight be enough to fight off the invading Renegadez or will the alluded to “growing support” be too much to overcome. 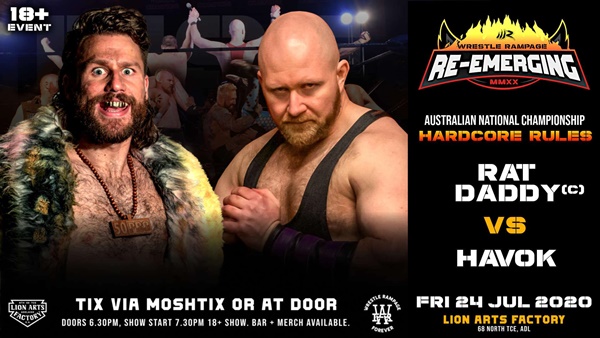 Despite achieving these big milestones one man still appears to lack any level of respect for the champion. The devilish veteran Havok has set his sadistic sights on Rat Daddy and the Australian National Championship.

On Friday Havok will get his chance at tearing the title from the grips of Rat Daddy in a match that is perfectly catered to his skill set. Havok and Rat Daddy will go to war in hardcore rules match, a style of match which Havok has proved to be extremely proficient in many times throughout the years.

With virtually no experience in this environment can Rat Daddy once again over the odds and walk out with his championship intact or will Havok finally join the esteemed list of Australian National Champions?

Stay tuned to the Last Word on Pro Wrestling for more on this and other stories from around the world of wrestling, as they develop. You can always count on LWOPW to be on top of the major news in the wrestling world, as well as to provide you with analysis, previews, videos, interviews, and editorials on the wrestling world.  Subscribe to Wrestling Rampage: Replay to see all the action from WR