It’s an exciting lineup for this week’s AEW DARK as the show is set to feature the first DARK match for the Lucha Brothers since they wrestled on DARK #1, the returns of DARK staples/favorites Shawn Dean and Serpentico, and perhaps most eye-catching, the AEW return and DARK debut for Brian Pillman Jr. Also set for Tuesday’s card, Scorpio Sky’s singles journey continues, Brandon Cutler and Peter Avalon are still desperately looking for a win and Big Swole will be in action against the debuting Rache Chanel.

AEW DARK has a great line-up set. Let’s take a look at the match-ups. 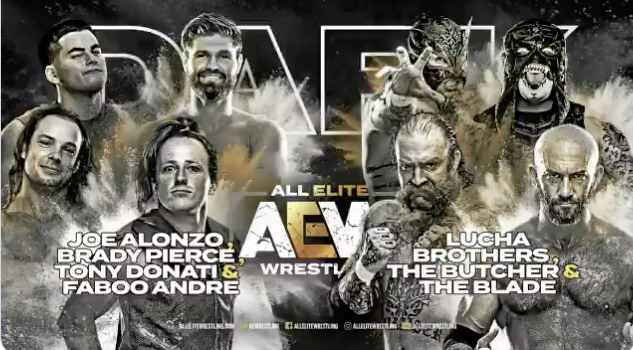 Set to take on the Young Bucks and FTR during night two of Fyter Fest this Wednesday, the Lucha Brothers and Butcher and the Blade will get a chance to test their chemistry for the second time against a quartet of young indie wrestlers who have all made DARK appearances in prior weeks. This marks the first appearance this year for the Lucha Brothers on DARK and just their second overall following the team wrestling on DARK #1 in October 2019. It will be their first match with AEW since March, when the duo found themselves stuck in Mexico during the early stages of the COVID-19 crisis. Regulars to DARK in 2020, the Butcher and the Blade are returning for the third time in five weeks.  This will be the second time-ever that Butcher and the Blade and the Lucha Brothers are teaming up, the first coming in February on Dynamite.

Wrestling out of Illinois the just 23-year-old Joe Alonzo made his wrestling debut in 2016 and since then he’s worked for a variety of companies most notably IWA-MS, Chicago Style Wrestling, Rockstar Pro, Berwyn Championship Wrestling,and more in the Midwest indie scene. Returning for his fourth match with AEW, Alonzo first made his debut for the promotion in March.

Returning to DARK for the third time in four weeks, the 28-year-old Brady Pierce, out of South Carolina, is a known wrestler within the Southern indie scene. Pierce has been wrestling for nine years for companies including Premiere Wrestling Xperience, Resistance Pro Wrestling, WrestleForce, ECWA, Pro Wrestling BUSHIDO, and recently, Southern Honor Wrestling.

World Wrestling Network trainee, Tony Donati, began his wrestling career less than a year ago. A former champion amateur wrestler in high school and NCAA Division I wrestler in college, Donati has picked up pro wrestling like a sponge. He’s wrestled for American Combat Wrestling, IPW Hardcore Wrestling, and more. Donati first made his AEW debut in March and is returning for his third match on DARK this week.

While this group of four is all teaming together for the first time, Donati and Faboo Andre got experience as a tag team on DARK during their most recent appearance for the promotion in May. Andre had a huge opportunity in his DARK debut, taking on Jon Moxley in what marked the first appearance of the AEW champ on the program. Wrestling since 2017, Andre, like Donati, was trained by the World Wrestling Network Training Center and since then, has wrestled primarily for WWN, REAL Pro Wrestling and ACW, where he reached the semifinals in their Proving Ground Tournament in 2018. 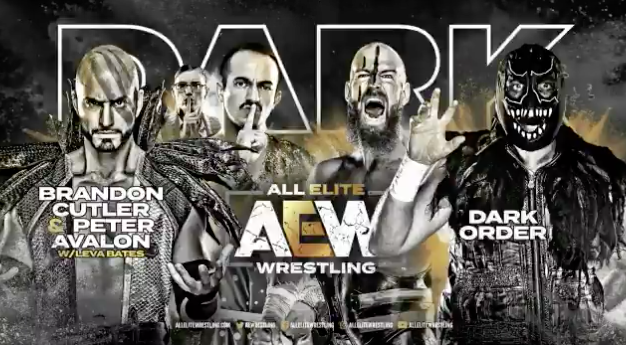 If at first you don’t succeed, try, try again. If someone gave this advice to Brandon Cutler and Peter Avalon, maybe they shouldn’t have. By now, everyone who follows AEW knows the story here as for the fourth time in the last five weeks, the makeshift duo of Avalon and Cutler will once again look for their first win as a team and first-ever AEW wins period, after beginning their careers 0-17. They’ve tried to get the victories in singles action and they’ve fared equally poorly in tag team action as both are winless in AEW. Perhaps a loss this week will show Cutler and Avalon that the only way for them to start picking up victories, or even just victory, is to join the Dark Order. As they say, if you can’t beat em, join em.

Evil Uno and Stu Grayson have been the Dark Order’s most successful tag team duo, having won each of their tag team matches this year. The team’s only loss came in a match which also featured Colt Cabana, John Silver and Alex Reynolds taking on SCU. This will be Uno and Grayson’s sixth appearance on DARK this year and while it will be their first against the duo of Cutler and Avalon, the Dark Order has already beaten both, teaming with other wrestlers at the time, in past DARK tag team action. 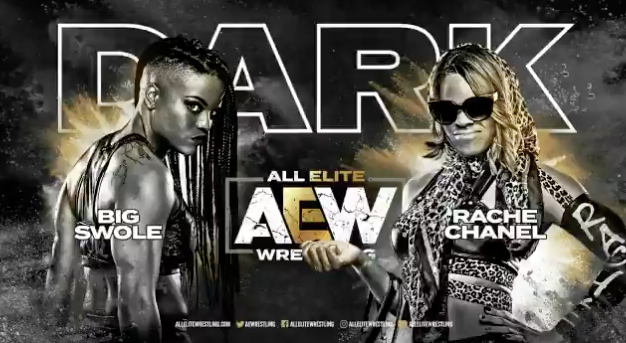 Returning to DARK for the fourth time this year, Big Swole will look to add another win to her growing AEW resume. Just a four-year pro with experience in SHINE, SHIMMER, WWN, Queens of Combat, and more, Swole joined AEW in 2019 and since then, has slowly been making a name for herself in the women’s division. She’s had an up-and-down year so far but at 4-3, Swole is not that far out of the top five of the title picture. Another win on Tuesday will help her get even closer to the championship scene. 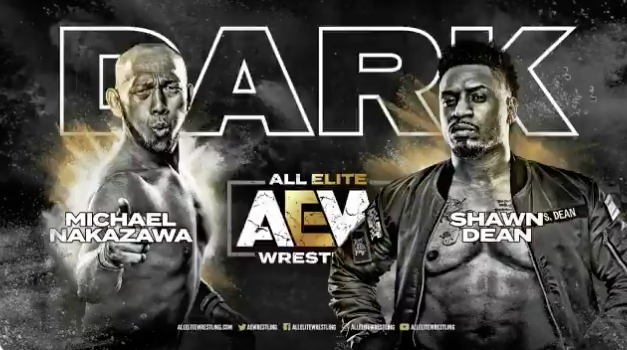 One of few rostered wrestlers who actually has a losing record on DARK, Michael Nakazawa is returning for his first match for the promotion since May when he picked up his first win of the year by defeating Brandon Cutler in count out fashion. This will be just the sixth match this year for Nakazawa, but one where he should be expected to pick up his second win of the year and just his third all time in AEW.

One of DARK’s early success stories, “The Captain” Shawn Dean makes his return to the show for the first time since June. He last wrestled for AEW on May 28th, taking on Brian Cage in Dean’s Dynamite debut. Trained by AR Fox at WWA4 and QT Marshall at the Nightmare Factory, Dean, a Chicago native, has also wrestled for EVOLVE, Southern Underground Pro, Georgia Premier Wrestling, ACTION Wrestling, and more. A former DARK staple, Dean will be making his ninth appearance on the show this week.

Will Hobbs vs. Orange Cassidy 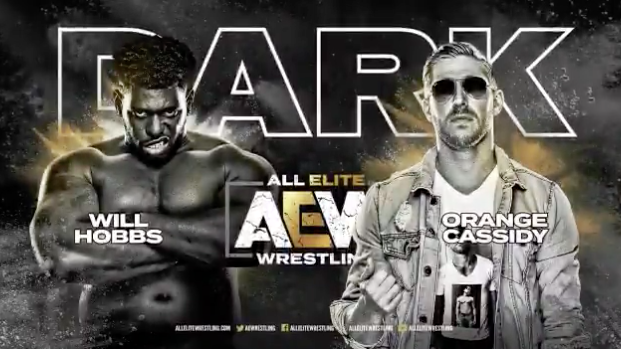 Set to wrestle Chris Jericho in a rare AEW singles match this week at Fyter Fest, Orange Cassidy, who has quickly become a fan favorite in AEW, has been enjoying quite the year. In his AEW career, Cassidy is 4-4, and is coming off a win in his last appearance on DARK, which marked just his second appearance on the show in 2020. Cassidy will look for a tune-up before wrestling the biggest match of his career at Fyter Fest, and he’ll get a chance to do so against the debuting Will Hobbs. 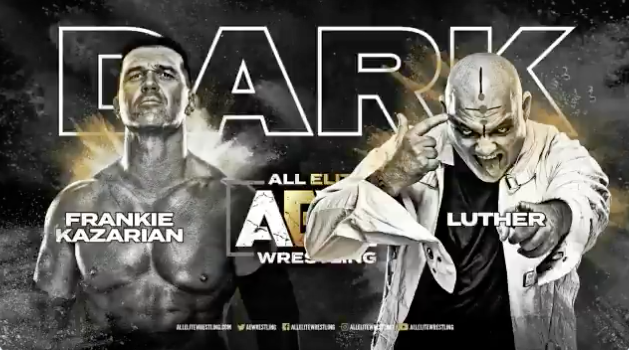 One of AEW’s most well-known names outside of the Elite, Frankie Kazarian is returning to wrestle his 20th match of the year, but just his second in singles action. Having wrestled mainly aside his partners in SCU, Scorpio Sky and Christopher Daniels, this will be Kazarian’s first singles match on DARK this year. One half of the former tag team champions, Kazarian will have his hands full taking on the indomitable Luther.

After largely stepping away from wrestling in 2003, the 51-year-old Luther wrestled just a handful of matches as one-offs before joining AEW in 2020. He’s 2-3 in his career, excluding battle royals. Luther has primarily been used on DARK, where he’ll be returning for the fifth time this year, following his most recent appearance in tag team action in late June. 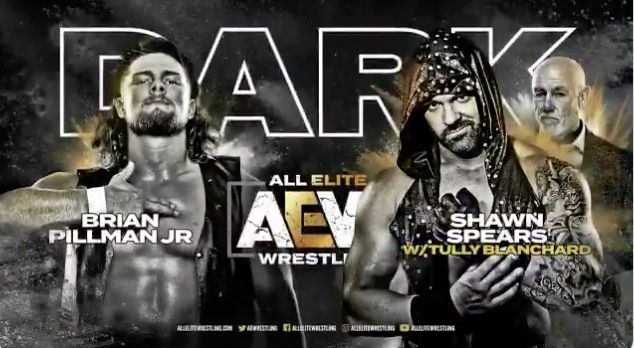 Lately, Shawn Spears has been embracing his darkest impulses in his journey to become truly heartless, and as a result, the wins have been coming in bountiful measure. In fact, ever since Spears was gifted the infamous black glove, worn by some of wrestling’s most notorious villains, by his mentor Tully Blanchard, the 39-year-old veteran has been undefeated. Much of that has come on DARK, where Spears has wrestled on each of the last three cards and is 5-0 in singles action overall. No longer looking for the perfect tag team partner, Spears has excelled under Blanchard’s mentorship and on Tuesday, he’ll have a chance to do so again, against perhaps one of the most well known wrestlers to ever appear on DARK.

Brian Pillman Jr. is making his AEW singles debut after taking part in last year’s Double or Nothing battle royale. Calling this the biggest opportunity of his career, the 26-year-old Pillman Jr., PWI’s Rookie of the Year in 2019, began training under Lance Storm and later Sami Callihan in 2017, in his native Ohio. He made his wrestling debut a year later and quickly rose to become one of the top stars in the indies, making appearances for Beyond Wrestling, Glory Pro, Rockstar Pro, Northeast Wrestling, DEFY Wrestling, IWA MS, and others, including Chicago’s Warrior Wrestling where he is the current champion. Pillman is most known however, for his time in MLW, where he is part of the New Hart Foundation. 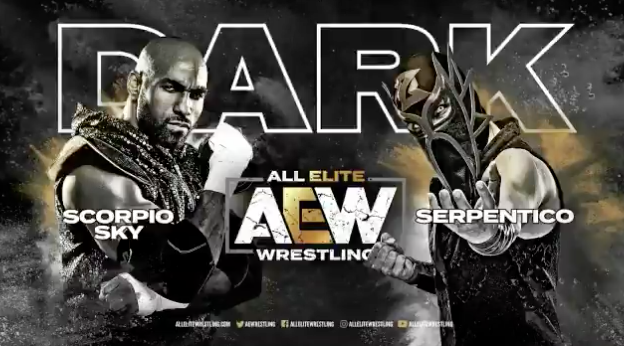 Another week, another chance for Scorpio Sky to continue building up his winning streak as he’ll look for his fourth victory on DARK in as many opportunities. The first man to pin Chris Jericho and later receive a world championship match against him, Sky is most known for his role in SCU, where he is one-half of AEW’s first-ever tag team champions. Lately however, Sky has stepped out on his own. An 18-year veteran of the industry, the 37-year-old Sky has had his fair share of singles success outside AEW as 16 of his 22 career titles have come on his own. While Sky has yet to start wrestling in singles action on Dynamite, he’s slowly but surely been building his singles resume. It may not be long until Sky is a full-fledged piece of the championship picture.

He’ll face one of AEW’s earliest DARK staples in the returning Serpentico, who is returning for his 10th match with the promotion. Having wrestled for all of the major U.S. televised companies (WWE, IMPACT, MLW, NWA, and ROH) in his 13+ year career, Serpentico first made his AEW debut in March 2020 and has wrestled nine matches, including twice in one night, since. Trained by Bully Ray and Devon Dudley at the 3D Academy, in his career, the 36-year-old Serpentico has wrestled for Premiere Wrestling Xperience, WrestleCircus, The Crash, Wrestling Revolver, FEST Wrestling, Full Impact Pro, EVOLVE, Ignite Wrestling and more. Overall, he’s won nine titles in his career and has competed in such tournaments as Florida’s J-Cup, which he won in 2018.