Game Changer Wrestling (GCW) returned in a big way last month with GCW The Wrld on GCW, Part 2 in their Indiana debut, and now they’re back with their monthly offerings, beginning on Saturday, July 4, with Backyard Wrestling 2. Last Fourth of July, GCW threw a backyard wrestling tribute show featuring many GCW regulars – as well as some underrated backyard wrestlers – with many regulars using their old backyard personas. That show also launched the career of Alex Zayne into the indie stratosphere and was such a success it appears to be a new Independence Day tradition with GCW. Here’s a look at what’s in store for GCW Backyard Wrestling 2, airing live on FITE.tv at 4pm EST. 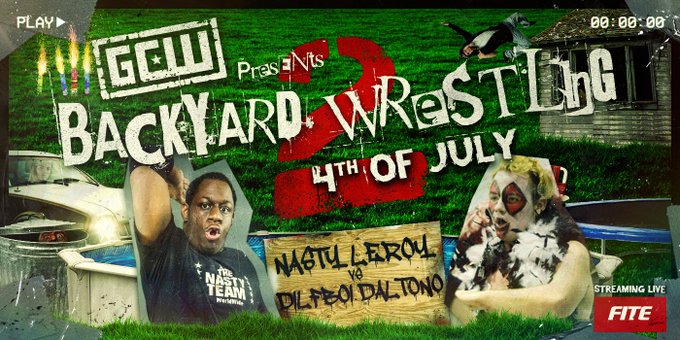 Nasty Leroy is a student of AEW’s QT Marshall at the Nightmare Factory who has become a viral cult hero due to his presence on Joey Janela’s Instagram chats with his hilarious observations, but many have yet to actually see him wrestle outside his Georgia home base. On Saturday, he’ll be competing in front of his largest national audience yet in his GCW debut, when he faces another rising star in DILFboi Daltano, who competes out of Locked Target Wrestling (LTW) in New Jersey. Two virtual unknowns will be competing to make a name for themselves and with GCW’s track record, don’t be surprised if either one of them go viral by the end of the day. 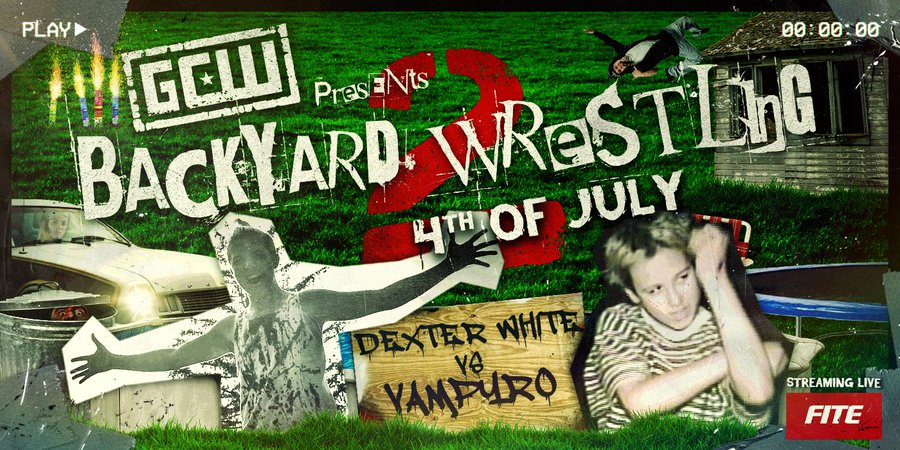 Atticus Cogar is one of the members of Rickey Shane Page‘s 44OH faction that has terrorized GCW for the past year, but on Saturday he’s appearing as Dexter White and will bringing out all the stops. While it sounds like the Mexican/Canadian wrestling star Vampiro is coming to GCW it’s actually Vampyro, the backyard persona of indie veteran Facade. Facade has been a staple with Pennsylvania’s International Wrestling Cartel (IWC) for over a decade, as well as working with DDT Pro in Japan and in the US with Ring of Honor, EVOLVE, and others. 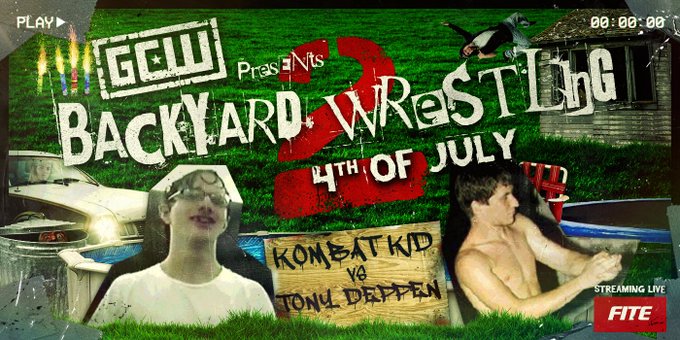 Chase Burnett, a 12-year pro from Rhode Island, is returning to his backyard roots, competing as Kombat Kid at Backyard Wrestling 2. Early in his career he fought in Beyond Wrestling, Absolute Intense Wrestling (AIW) and EVOLVE, but stepped away for a while before returning full force in 2019, returning to Beyond on an episode of Uncharted Territory last May. As the Kombat Kid, he’ll be facing off against one of GCW’s top stars in Tony Deppen, who has become one of the best wrestlers in the US indies today. Last year, Deppen’s match against Alex Zayne launched Zayne into stardom – will the same happen for the Kid? 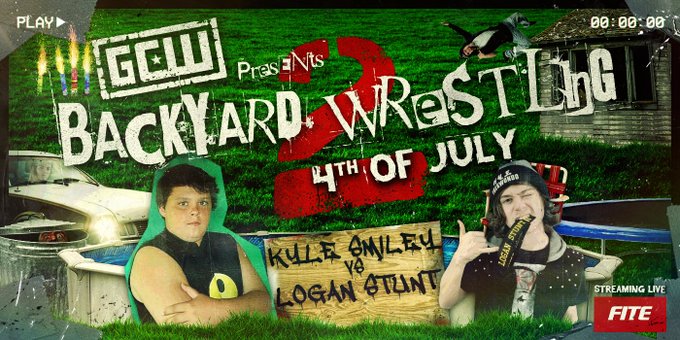 Last year, former GCW World Champion KTB returned as his backyard persona Kyle Smiley, losing in a triple threat to Colby Corino that also featured Alex Ohlson. This year, Smiley is back and taking on a member of a family that KTB has been haunted by for over a year in Logan Stunt. KTB was the man who faced Logan’s brother, AEW star Marko Stunt, that propelled Marko into a viral sensation, and he’s had his run with Marko multiple times since. But now Logan is taking up the family tradition of getting under KTB’s skin and this time its going down in the backyard! 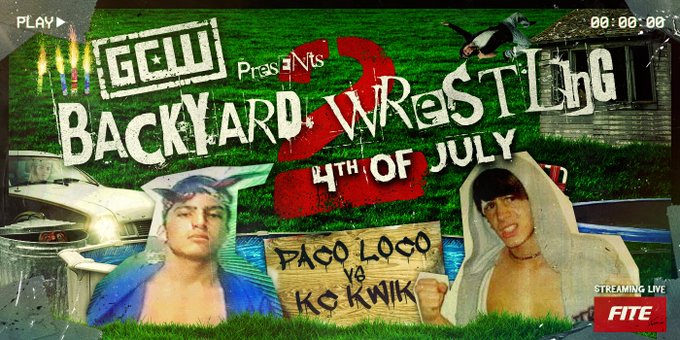 Between GCW and Beyond Wrestling, 2019 belonged to the “Dirty Daddy” Chris Dickinson, who emerged as arguably the top wrestler in the US indies. This Saturday he returns to the yard as Paco Loco, where the multi-tooled grappler will face off against KC Kwik, the backyard persona of Kit Osbourne. Osbourne is a long time veteran of Combat Zone Wrestling (CZW), where he competed from 2010 through 2019 and was a 2x CZW Medal of Valor Champion. A hardcore specialist, he also works with Hardcore Hustle Organization (H2O) and On Point Wrestling (OPW), where he’s a former OPW Champion. 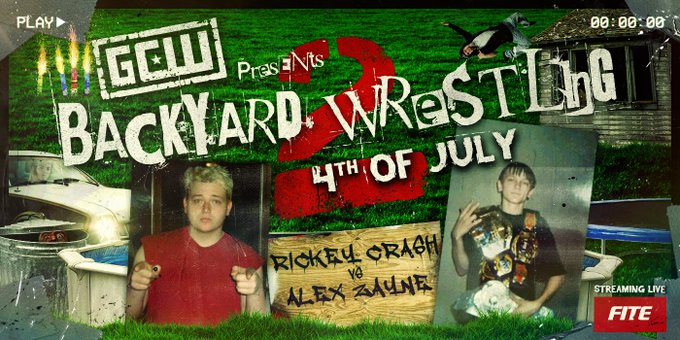 The reigning GCW World Champion Rickey Shane Page is competing in the yard on Saturday, but he’ll be showing up under his old backyard moniker, Rickey Crash. A deathmatch legend of the past decade, he’ll be facing an opponent a lot faster than he’s used to, when he goes one on one with last year’s Backyard Wrestling breakout star in the high-flying Alex Zayne. 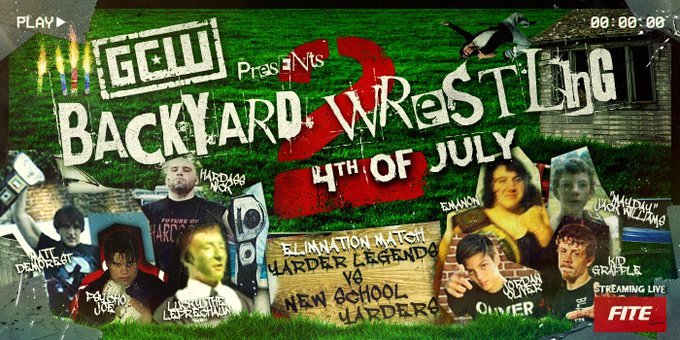 It’s going to be a true Survivor Series style match in the yard on Saturday as two teams compete in an Elimination Match pitting the Yarder Legends versus the New School. The Legends are led by Hardass Nick (Nick Gage) and he’ll be joined by Psycho Joe (former CZW World Champion Joe Gacy), Lucky the Leprechaun (Luck 13), and backyard legend Matt Demorest. The New School Yarders are led by one of GCW’s true MVPs in Jimmy Lloyd (as Emanon), alongside Jordan Oliver, Kid Grapple (Blake Christian), and “Mayday” Jack Williams (Cole Radrick). A fun blend of some of GCW’s true veterans against four of their young guns in what is sure to be a blend of sheer entertainment joy and absolute chaos.

Stay tuned to the Last Word on Pro Wrestling for more on this and other stories from around the world of wrestling, as they develop. You can always count on LWOPW to be on top of the major news in the wrestling world, as well as to provide you with analysis, previews, videos, interviews, and editorials on the wrestling world. GCW Backyard Wrestling 2 will air live on FITE.tv, but you can also watch back catalog on IndependentWrestling.tv (IWTV).