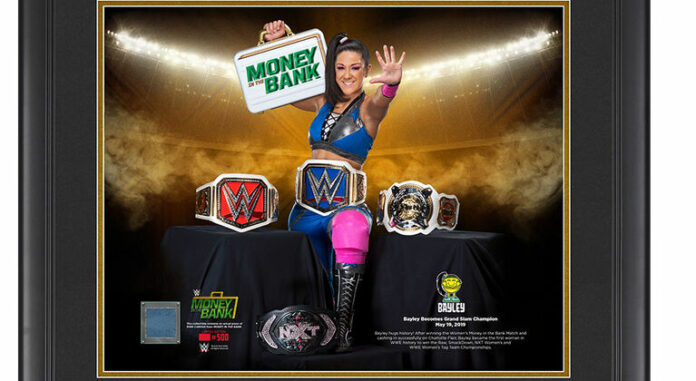 All March long is Women’s History Month, making it a perfect time to celebrate the women who made history in professional wrestling. Over the past decade or so, women have taken center stage in the United States pro wrestling scene. And over the last five, it has in the WWE more than ever. WWE has done more than it has ever to make sure the women of their division are on an even playing field, with many legends and Hall of Famers even saying that the women are clearly outdoing the men in today’s current WWE. The names like Becky Lynch, Sasha Banks, and Charlotte Flair have been at the forefront of the change since the beginning of this “Women’s Revolution.” But these three women, along with all the legendary women in the history of the WWE, have never been a Grand Slam champion.  There has only been one grand slam woman in WWE’s history, and her name is Bayley.

The current SmackDown Women’s Champion became the first and only woman to capture all four championships the WWE has to offer to women in 2019, making her the first Grand Slam Women’s Champion in history. In celebration of Women’s History Month, we will take a look back at the career and championship victories of “WWE’s Role Model,” Bayley.

NXT saw the height of Bayley’s popularity by far. She was one of NXT’s most popular stars at a time when the brand was arguably more popular than ever. She, alongside her fellow Four Horsewomen, brought attention to women’s pro wrestling in the WWE that no others had before. The matches they were having went from great to spectacular. But in the beginning, it seemed as though Bayley was the last choice when it came to the four ladies. Of course, Becky Lynch never won the NXT Women’s Championship, but Bayley was the last to be called to the main roster. She seemed to be left out of the revolution that was happening on the main roster. Bayley wouldn’t debut until almost a year after the other three. What was important for Bayley, however, was what she did in NXT.

Speaking on popularity, the fans in Full Sail and around the world connected to Bayley. “Hey, hey Bayley! Uh ah! I wanna know if you’ll be my girl” became the anthem from the fans to Bayley as it rang through arenas in England and eventually the states. The night she won the NXT Championship once and for all after all the bullying the hugger faced was pro wrestling bliss.

NXT TakeOver: Brooklyn saw magic made that night. Bayley stepped up to NXT Women’s Champion and the bully, Sasha Banks. In doing so, they had the greatest women’s match in the history of NXT and possibly the WWE, depending on who you ask. It sparked the revolution into full gear. A revolution that was certainly long overdue but here because these two ladies showed they were just as good, if not better than the men. Bayley hit a Belly-To-Belly in the middle of the squared circle and pinned Banks, sending the wrestling universe into a frenzy. Brooklyn exploded as Bayley finally won her first champion. After the match, the Four Horsewomen embraced as you could feel this was the last time they would all be together on the black and yellow brand together.

Uncharted territory. 30-minute Iron Woman match to decide the NXT Women’s Champion. The first and only ever women’s match to main event an NXT TakeOver. Bayley and Banks made magic once before, so why not try one more time? This one was a completely different fight between the two. You had to stretch it out with multiple falls to occur. But they did it spectacularly inside Full Sail and seeing Bayley in that building was something to behold. She was the perfect babyface. One that you would think could never change or have the fans switch sides, now that’s a conversation for later. Banks even made the Bayley mega fan Izzy cry in this match. That’s how excellent this iron woman match was. Bayley pulled it out in the end, slaying Banks for the final time in an NXT ring.

Beloved Run Ends At The Hands Of The Empress

If you go back and watch this match, you can still feel the pure, utter shock in the building. You could have heard a pin drop. NXT TakeOver: Dallas saw the NXT Women’s Championship run of Bayley come to a shocking end when Asuka stunned the world and put the champion out cold. It was stunning really. Bayley was at the top of her game. Fans were all in on her in a sense. She was the most popular star on the roster but it was here that Asuka began her tremendous and historic run. Even though she was undefeated, it still didn’t seem real. But hey, that’s pro wrestling. Plays with your emotions. Good thing for Bayley, this was only a small blemish in a career full of success. She was “called up” to the main roster soon after.

It’s sad to think that by the time Bayley became a champion on the main roster, her luster with the fans was beginning to wear off. She didn’t win her first main roster championship until almost a year after she lost her NXT Women’s Championship. Which is fine because Bayley is more of an underdog, but she was misused at times on the main roster. Someone like Bayley should have been the main face of the division from the start considering her fanfare when she was in NXT. And while she was among that, it just did not work. Her and Sasha Banks were somewhat connected at the hip from the start. But this is about championship gold. Bayley won her first title on the Feb. 13, 2017, edition of Monday Night Raw when she defeated Charlotte to win the Raw Women’s Championship.

She even defended the title successfully at WrestleMania 33 against Banks, Flair, and Nia Jax. But just a month later, it was downhill from there for Bayley. She would lose the title at Payback to Alexa Bliss and an essential free fall down the card followed. One of the worst segments in WWE history aired when Bliss hosted, “Bayley, This Is Your Life.” It wrecked Bayley and was one of the many things that ultimately derailed her for the next year and more.

2018 was not the year of Bayley in any sense of the word. She came close to feuding with Sasha Banks but never actually did. They teamed to face The Riott Squad for what seemed to be an eternity. It was a lost year in the sense of any importance or chasing gold. Once 2019 came around, she flipped the switch. The first-ever WWE Women’s Tag Team Champions were set to be crowned at the Elimination Chamber PPV inside the Chamber. The Boss ‘N’ Hug Connection had their shot to finally get back in the limelight and win gold. This was what they were waiting for for over a year. Bayley and Banks stepped inside the Chamber and walked out as champions, defeating Sonya Deville and Mandy Rose to clinch the win and become the inaugural champions.

Both ladies went on a parade to the brands to let the world know they would be defending them on Raw, SmackDown, and even NXT. But before that could ever really happen, they were dethroned. WrestleMania 35 would be the moment that it came crashing down again. Without getting pinned, they lost their WWE Women’s Tag Team Championships in their second defense when The IIconics seemingly stole them. Before a run could even be had by these two who had been the main advocates for the belts, they lost their titles. But it was another accolade for Bayley.

Even with the short run for Bayley as a tag team champion, 2019 was her year. When the Superstar Shake-Up came around following WrestleMania, she was moved to SmackDown for the first time in her career. It was a breath of fresh air really, as she could find her footing for the first time in a long time as a singles competitor. Bayley became a competitor for the 2019 Women’s Money in the Bank ladder match. And not only did she do that, but she also won the thing in succession. It did not take long for Bayley to cash-in, doing so on that very night to win her first SmackDown Women’s Championship and officially become a Grand Slam Champion. The first woman to do so in WWE history.

What followed was a version of Bayley that no one was accustomed to. She showed different signs by taking out Becky Lynch alongside her best friend Sasha Banks. And while her goal was to have new competitors fight her for the belt, it was tough to get away from Charlotte. It was conflicted Bayley, who didn’t seem to know what she wanted. Was she a fan-favorite face anymore? Or was she finally going heel? Either way, Flair followed her and eventually won the title back. Bayley responded accordingly after losing her title to Charlotte at Hell in a Cell and established herself on what she wanted to be seen as once and for all.

Setting Eyes On The Future… For Herself

The first SmackDown following Hell in a Cell unleashed the new Bayley. She destroyed her inflatable tube-men and showed the world her new look. Bayley was no longer doing it for the kids who turned their backs on her. She was going to do it herself. And that she did, as she regained the SmackDown Women’s Championship and remains the champion heading into WrestleMania. It was a move that excited many, and one Bayley clearly needed. With Banks by her side, she shows that this change was something to spark her career in a way she needed. She calls herself a role model, but what may get under the fan’s skin more is that she is the Grand Slam Champion and their favorites can’t say the same.

Bayley’s impact on professional wrestling will be underlooked. It has been already due to the amount of time she was not in the spotlight during 2018. But when celebrating Women’s History Month, we recognize what Bayley has done to this point in her career because she deserves that recognition. She’s not “The Man”, “The Boss”, or “The Queen.” In the end, she’s just Bayley. And for us fans, that’s all we have ever really needed. When NXT needed a figurehead to rebuild around, Bayley was there, when SmackDown needed a new heel to build around, Bayley was there.  While she doesn’t get as much recognition as her fellow horsewomen it’s clear the company trusts her and her talents.

Too bad I “peaked in NXT” huh?

Stay tuned to the Last Word on Pro Wrestling for more on this and other stories from around the world of wrestling, as they develop. You can always count on LWOPW to be on top of the major news in the wrestling world, as well as to provide you with analysis, previews, videos, interviews, and editorials on the wrestling world. WWE fan? Check out the WWE Network to fulfill all of your WWE needs!