Two steel cage matches, two blood feuds seemingly coming to an end and that will all happen on this episode of NXT. With WrestleMania season firmly underway, the Takeover: Tampa card should start taking shape. Let’s find out how and dive into this week’s episode of NXT!

DAKOTA KAI & RAQUEL GONZALEZ GET THE BETTER OF TEGAN NOX

Tegan Nox looked to put her rivalry with Dakota Kai to bed in tonight’s first steel cage match. For the early portion of the match, the cage did its job, keep Raquel Gonzalez from interfering. The former best friends used the steel structure to brutalize each other.

Nox managed to keep the edge throughout, even pulling off a diving crossbody from the top of the cage. Sadly Raquel would find a way to interfere, repeatedly preventing Nox from being able to exit. Kai would capitalize on a few opportune strikes but was still unable to secure victory.

In the closing moments of the match, Nox was able to seemingly put Kai out of commission by slamming the cage door into her leg. This angered Raquel, who pinned Nox between the cage door and wall. This opened the door for Kai to crawl out of the cage, leaving with the win and an injured leg.

Shotzi Blackheart and Chelsea Green faced off for a spot in the number one contender’s ladder match at Takeover: Tampa. This was a fairly brief encounter that still allowed the relative newcomers to showcase their skillset. Green would pick up the win and the first spot after hitting Blackheart with the “I’m Prettier” for the pin.

The Undisputed Era’s Kyle O’Reilly and Bobby Fish looked to get back in the win column. To do that, they’d have to go through the always tough Oney Lorcan and Danny Burch. These two teams never disappoint the fans, once again delivering a fun hard-hitting match.

The Undisputed Era picked up the win, quickly grabbing the microphone. The duo wasted no time calling out NXT Tag Team Champions Matt Riddle and Pete Dunne. The champions came out, clearly more than happy to give the former champions a rematch. Before anything could be made official, The Grizzled Young Veterans blindsided the champions. Zach Gibson grabbed a mic, quickly stating they did not care what anyone had to say and The Grizzled Young Veterans deserved the next shot at the NXT Tag Team Champions.

VELVETEEN DREAM LOSES BATTLE BUT THE WAR HAS JUST BEGUN

Velveteen Dream and Roderick Strong looked to go to war in tonight’s second steel cage match. These men wasted no time, engaging in a brawl before the bell could ring. Though control was traded throughout the contest, Strong arguably had the highlight of the match after nailing Dream with the “Olympic Slam” from the top of the cage.

The Undisputed Era made their way ringside just as Dream was about to claim victory. Dream valiantly fought them off, before getting an idea after seeing Cole entered the cage. With a big grin, Dream shoved Strong out of the ring and locked the cage turning his attention to the NXT Champion.

Just when #UndisputedERA thinks they have the answers…@DreamWWE changes the questions!!!

Dream delivered a beating to Cole while keeping the rest of the Undisputed Era at bay. The show closed with Dream sitting atop the cage, hoisting the NXT Championship making a clear statement to Adam Cole.

Stay tuned to the Last Word on Pro Wrestling for more on this and other stories from around the world of wrestling, as they develop. You can always count on LWOPW to be on top of the major news in the wrestling world. WWE fan? Check out the WWE Network to fulfill all of your WWE needs! 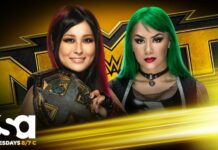 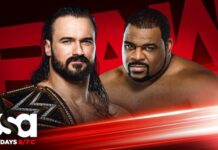 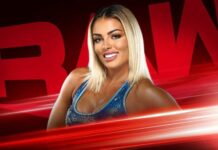