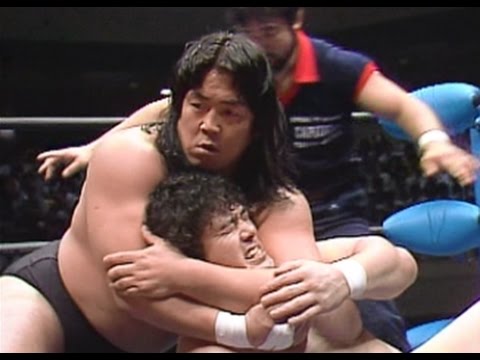 This past week, 67-year old Riki Choshu, a legend in the Japanese history of puroresu, retired from active competition. On Wednesday, June 26, at the legendary Korakuen Hall in Tokyo, Japan, Choshu wrestled his final match, ending a five-decade career in professional wrestling.

Riki Choshu was a university wrestling star in Japan, Senshu University wrestling teammates with future NJPW performer Mitsuhide Hirasawa (who would find greater fame as Hideo Saito, Captain New Japan and the original Bone Soldier in Bullet Club). But due to his father being Korean, he was forbidden to compete for Japan on a national level. His father’s country of birth, however, gladly accepted him. In the early 1970s, he was brought into NJPW, trained by Antonio Inoki, Masa Saito, and Karl Gotch, debuting with NJPW in 1974. As a Young Lion, he was sent on an excursion to work in the United States in 1975, at the height of the National Wrestling Alliance (NWA)’s territorial hold. Under his real name, Mitsu Yoshida, he worked the bulk of the career with Championship Wrestling From Florida but also worked for Georgia Championship Wrestling and George Cannon‘s Superstars of Wrestling from Windsor, Canada/Detroit.

By 1977, he was back in Japan, now known as Riki Choshu and he became of one New Japan’s biggest stars in the 1980s. In 1983, he held the WWF International Heavyweight Championship. Following Vince McMahon Jr. withdrawing his New Japan alliance in 1982 when he assumed control of his father’s company, NJPW kept the title as their major single’s title. It was retired in 1985, just a few years prior to the creation of the IWGP Heavyweight Championship.

In late 1984, he formed the stable Ishin Gundan, that also featured Animal Hamguchi, Killer Khan, Masa Saito and others. That December, the group “invaded” All Japan Pro Wrestling, spending the next two years just fighting for NJPW’s rival (similar to Suzuki-gun’s “invasion” of Pro Wrestling NOAH a few years back). While in All Japan, he captured the PWF Heavyweight Championship. The PWF was one of the three world titles united to form the future AJPW Triple Crown title.

If Riki Choshu’s career was created in the 1980s, it was in the 1990s that he cemented his legacy. Following his return from All Japan exile in 1989, he captured his first IWGP Heavyweight Championship, defeating Salman Hashimokov. He lost it to Vader in his first defense, but a year later, he captured his second IWGP title, reclaiming it from Vader. His third and final IWGP Championship came in 1992, defeating NJPW icon Tatsumi Fujinami at the WCW/NJPW Starrade at the Tokyo Dome on January 4 (one of the precursor events that lead to Wrestle Kingdom).

By the end of the 1990s, Choshu was ready to head home. In 1998, he held his retirement match at another January 4 Tokyo Dome show, Final Power Hall, facing Jushin Thunder Liger in his last match. During the traditional gauntlet for retiring Japanese wrestlers, the only man he put over was his pupil, Takashi Iizuka. Ironically, Iizuka retired himself earlier this year.

But only two years later, he was brought in for a match against another Japanese legend in Atsushi Onita, and from there he caught the bug once again. He would continue wrestling regularly with NJPW through 2010, before going freelance and working multiple promotions around Japan. For his final match on Wednesday, he competed in a tag team match, teaming with NJPW’s Tomohiro Ishii and former New Japan tag specialist Shiro Koshinaka to face the trio of Great Muta, Tatsumi Fujinami and Togi Makabe.

Stay tuned to the Last Word on Pro Wrestling for more on this and other stories from around the world of wrestling, as they develop. You can always count on LWOPW to be on top of the major news in the wrestling world, as well as to provide you with analysis, previews, videos, interviews, and editorials on the wrestling world. For Riki Choshu’s classic NJPW matches, find them all at NJPW World.