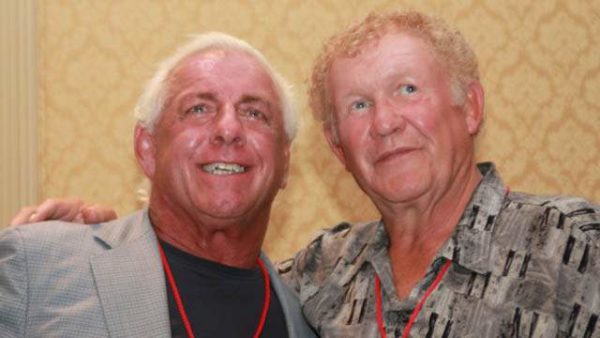 UPDATE: Championship Wrestling From Wrestling’s David Marquez has corrected Flair’s report by stating he’s contacted Race’s family and that while Race is battling lung cancer, it has not been diagnosed as being terminal as of yet.

I’ve just spoke to Harley Race’s family and yes he has been diagnosed with Lung Cancer but it’s not terminal. He’s being treated and supervised by his doctors. He is still very active in @worldleaguewlw and appreciates everyone’s concerns. pic.twitter.com/jn2uYLFeDF

At a Legends of the Ring Q & A Session on Friday night, involving 16x World Champion Ric Flair and 12x World Champion Hulk Hogan, Ric Flair dropped a bombshell revealing that one of the greatest NWA World Champions of all time, Harley Race, was suffering from terminal cancer. The 75-year-old has had a life of health mishaps nearly as great as his wrestling career, battling polio as a child, nearly losing his leg in a car crash that claimed his new bride in the early 1960s, beating cancer once before, and breaking both legs a few years ago. His body is also filled with hip and knee replacements, fused vertebrae, and an iron rod in his forearm. The 7x NWA World’s Heavyweight Champion has literally given his life for the sport he loved so much, but now it appears that his final fight has now begun.

Harley Race got his start in the late 1950s, training under two former World Champions in Stanislaus & Waldek Zybyszko, making his debut in 1960. He initially made his first big impact on the world of pro wrestling in the 1960s with Verne Gagne‘s American Wrestling Association (AWA), where he formed a formidable tag team alongside Larry “The Ax” Hennig that won the AWA World Tag Team titles three times during the 60s.

But as his career entered the 1970s, Harley Race jumped to the National Wrestling Alliance (NWA), initially with NWA territories NWA Western States (in Texas) and NWA Central States (in Missouri), where he would become a 5x NWA Central States Heavyweight Champion. He also worked in Georgia, Ohio and multiple other territories, building his legacy, as well as working for Stu Hart in Stampede Wrestling in Canada, winning the Stampede North American Heavyweight Championship in 1974.

He hit international stardom in 1973, when he captured his first NWA World’s Heavyweight Championship by defeating Dory Funk Jr. in Kansas City. While his first reign was only 57 days long (losing it to Jack Brisco in Houston that July), it would establish Harley Race as a main event star in the NWA, during the height of the territorial dominance. It wouldn’t be until 1977 that he would win his second NWA World title, but he held it an astonishing 926 days, defeating Terry Funk in Toronto in February of 1977, holding it until his loss to Dusty Rhodes in Florida in August of 1979.

Throughout the early 1980s, he would capture the NWA World title five more times, becoming a staunch rival for the emerging “Nature Boy” Ric Flair, who was becoming the new face of the NWA as it entered a national rivalry against the emerging WWF. His feud with Flair in 1983, culminating in Flair’s victory over Race for the title in the first ever Starrcade in a steel cage, is seen by many as the official coronation of Flair as the face of the NWA.

By 1986, his star had wained in the NWA, and he jumped ship to Vince McMahon and the WWF, where he became an instant main event heel under the guidance of Bobby “The Brain” Heenan. He would become the King of the WWF and engaged in feuds with the likes of Ricky Steamboat, Junkyard Dog, and Tito Santana, as well as lengthy feuds with WWF World Heavyweight Champion Hulk Hogan. He left the WWF in 1989, returning to what had now been renamed World Championship Wrestling (WCW).

He retired from the ring in 1990, following a 40-year career in the ring, and began to work as a manager in WCW, guiding the likes of Lex Luger, Vader, and Kevin Nash (as Vinnie Vegas), but departed from WCW in 1995.

Ever since 1973, Race has also been an active promoter in the pro wrestling world. In 1973, he bought into Heart of America Promotions (which ran NWA Central States), which he held ownership stakes until 1986. In 1999, he began his own promotion in his home state of Missouri, World Wrestling League (WWL), which still runs today, as a wrestling school and independent promotion. He was inducted into the WWE Hall of Fame in 2004.