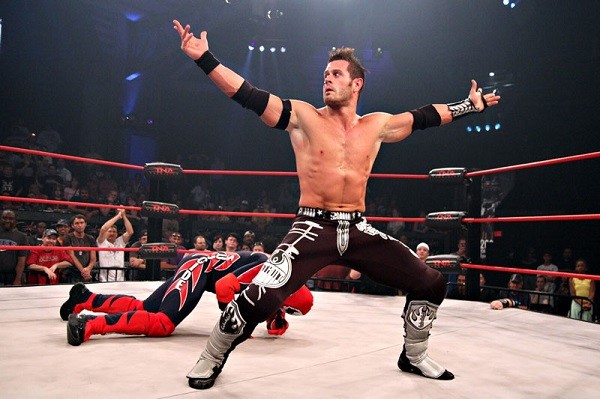 Over the weekend during Ring of Honor‘s TV tapings at Center Stage in Atlanta, Georgia, Alex Shelley – one half of the Motor City Machine Guns tag team – announced he was leaving the wrestling business following his partner Chris Sabin‘s singles match against Scorpio Sky. Wrestling Observer’s Dave Meltzer had noted recently that Shelley’s ROH contract had recently expired, although he hasn’t appeared since the early June TV tapings, when he was partnered with Jonathan Gresham and Leon St. Giovanni in a #1 Contendership gauntlet for the ROH 6-Man Tag Team Championship. The last Motor City Machine Guns match was at this year’s ROH/NJPW War of the Worlds in Shelley’s home state of Michigan on May 12, where they faced The Young Bucks (Matt & Nick Jackson) and Roppongi 3K (SHO & YO) in a tag team triple threat. Shelley would take to Twitter to say his thanks.

In the end, MCMG's final match was against @NickJacksonYB, @MattJackson13, @njpwShowT, and @njpwyohei_k. I really don't think I could've asked for a better ending. Four guys I love very much who I hope I helped some over the years. Thank you, gentlemen.

Special thanks to @hidakaikuto, without whom there would have never been an MCMG to begin with.

Detroit native Alex Shelley made his pro wrestling debut in the Michigan independents in 2002, before meeting Scott D’Amore in Windsor and working with Border City Wrestling (BCW), where he had a three year run and became the BCW Can-Am Television Champion. He would also help training at D’Amore’s Can-Am Wrestling School in subsequent years. Although he’d partnered with Chris Sabin on the indies a few times prior, Shelley’s thanks to Ikuto Hidaka on Twitter (as seen above) is due to the creation of the duos most famous mark on wrestling, Motor City Machine Guns, while wrestling in Japan with Pro Wrestling ZERO1.

The Motor City Machine Guns became one of the mid-2000s most energizing tag team combinations, with hot runs in both Impact Wrestling and Ring of Honor, as well as stints in NJPW, capturing tag team gold in all three. After MCMG briefly split up, he would form another legendary tag team in The Time Splitters with KUSHIDA (another student of D’Amore), capturing the IWGP Junior Heavyweight Tag Team titles on two separate occasions.

According to reports, Shelley is returning to school and is stepping away to focus on his education.