One month before wXw celebrates one of the biggest wrestling festivals in Europe with the 16 Carat Gold Tournament, some wrestlers have to earn their spots for the highly anticipated show and others have to defend their gold. It all starts this weekend with wXw Dead End.

Pace is the current wXw Academy Trophy Champion and with just about one and a half year of experience, he seems to be a very promising prospect to watch out for in the future. The veteran in this match is Veit Mueller, who has roughly around 5 years of in-ring experience. This should be a short, fun match to get the crowd hot and introduce the two performers to the fans.

The leader of RISE, John Klinger, secured two spots in the 16 Carat Gold tournament for his team. One went to the man who defeated the former RISE member Chris Colen at Back To The Roots: Da Mack. The other one has to be fought out at Dead End. Ivan Kiev lost his Shotgun Championship at the 17th Anniversary show to Bobby Gunns. Lucky Kid is part of the Young Lions with Tarkan Aslan. A match between two young performers that look to secure their opportunity for competing in 16 Carat.

Walter is the challenger for the wXw Unified World Wrestling championship on day two of the 16 Carat Gold Tournament – he will face the winner of Dead End’s Main Event there. After his international breakthrough in 2017, he looks to exceed last year by making 2018 the year of RINGKAMPF. His partner is starting in the Tournament itself and hopes to secure a monumental win for RINGKAMPF and an opportunity to fight for the Unified title in the future. Together they are defending the Tag belts against the up and coming team of Francis Kaspin and Jay Skillet. This match could be a showcase for either one of the teams and might have a surprising title change in the end…

Prediction: Jay-FK get the surprise win

The Champ won the title at the 17th Anniversary show from Killer Kelly in her first defence. Martina defeated Melanie Gray in a brutal Hardcore Match with tables, chairs and thumbtacks to receive this opportunity, which led to this Triple Threat. This is the last Marquee Event before the 16 Carat Gold tournament happens, so let’s see who walks into the biggest event of the wXw year as champion. Can Kelly reclaim the gold and be a 2x Women’s champion, is the Session Moth going to grind her way to her first ever wXw title, or is the STARDOM Superstar going to retain her belt?

As mentioned earlier, Gunns won the title last year. During a promo at Back To The Roots he got interrupted by Andy and they had a non-title match which Andy won, so he now challenges for the title. Andy turned against his former “A4” partner Marius Al-Ani at the wXw World Tag League 2017 and he seems to be rejuvenated since his turn – although the betrayed one could return and interfere in his former friend’s match. Gunns is very charismatic and could be one of the next prospects to look out for when 16 Carat comes around over the next few years. 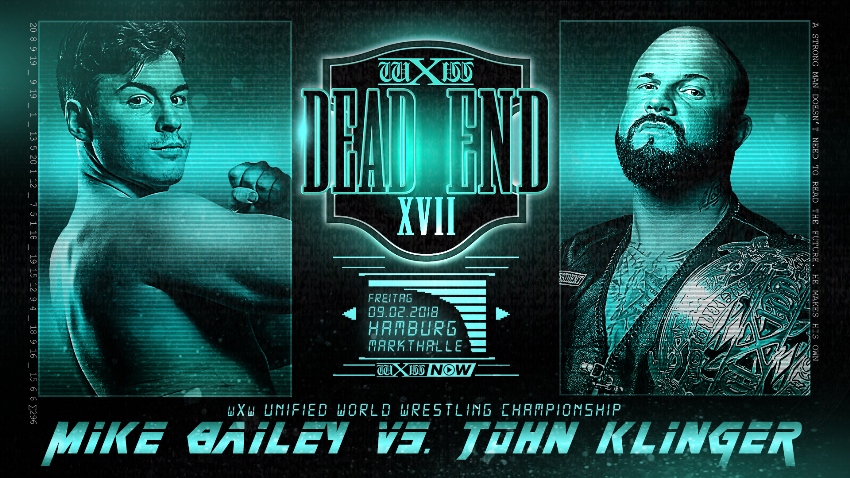 Mike Bailey joins the roster ahead of 16 Carat Gold and gets a shot at the most prestigious title in wXw against the leader of RISE, one of the most dominant factions in wXw. Klinger is coming off a victory against his hardest rival, Ilja Dragunov, in a bloody match at the 17th Anniversary show. RISE lost to RINGKAMPF and Monster Consulting at Back To The Roots in the “Käfigschlacht” when Walter submitted Bad Bones and subsequently made himself a number one contender for the traditional Unified Title match at Night 2 of 16 Carat Gold. They are going to have a great match with astonishing high flying by Bailey who can put on a superb match with any opponent but in the end…