The 25th anniversary of lucha promotion AAA is this Saturday August 26 at Triplemania XXV but it’s not free of controversy. The card has, at just one day of happenning, a lack of information about some of the matches keeping in tradition of a promotion known for hiding surprises from the fans. AAA is get over two big obstacles: distrust from the fandom and the uncertainty that rumours have been stated about new promotion The Crash appearing in the event. But, for now, this is the card and predictions for it.

Llave a la Gloria, Final Round

This scouting tournament has come to the finals. For five months AAA made visors of new talent all over the country and these are the finalists:

It is unknown how this tournament is going to be arranged, but it’s undeniable that all this luchadores are top notch, so we can expect big things on this.

AAA has a tradition that fans can love or hate. Relevos mixtos includes (at discretion) one mini luchador (a mini is in the boundaries of a midget and just a short guy), an exótico (Queer luchador), a woman and sometimes some freakish guy. On this card we got Big Mami, Dinastía, Estrella Divina and Máscara de Bronce vs Hernández, mini Psycho Clown, Mamba and La Hiedra. This match is kind of irrelevant since the mixtos titles aren’t on the line but we got Hernández and Máscara de Bronce and both guys have been bring it all so we can expect good stunts and storytelling on this. Big Mami is treated like some kind of divertimento but she can wrestle and is one good adding on the mix.

Sexy Star is the new Reina de Reinas (Queen of Queens) and she must defend her title against one of the most celebrated luchadoras this year. Hiedra has great abilities and Sexy Star is the real queen on AAA. She just come back from the ostracism AAA put on her, Sexy is back! And yeah, Hiedra is programmed in two matches.

BREAKING NEWS: Just a couple of hours, official word has been said that Ayako Hamada and Lady Shani have been added to the match.

Dark Cuervo and Dark Scoria are two of the most competent luchadores right now in AAA and having a match against Aerostar and Drago would fill the requirement to watch a great moment in lucha libre. Instead of that, we see two more teams added to the mix and we can expect from the Clowns lots of brawling combined with the aerial work from Aerostar and Drago.

Prediction: Aerostar and Drago will be the new champions

30 luchadores from all ages of AAA are going to brawl in this battle royal to win a coup which has little sense. Big time for the nostalgia and we will take a look at some of the first AAA luchadores like El Picudo, Nygma, Charlie Manson, Electroshock, El Intocable and even L.A. Park is rumoured to be there. Some of these guys have been out of lucha for some time, so the idea of making this a tríos match is better for them. On the other hand, eliminations will be more interesting as some of the participants have current rivalries.

Prediction: Los Vipers could win this just for the sake of nostalgia.

This may be the match of the night. Pagano and El Mesías (Mil Muertes in Lucha Underground) have been building this match for months and the heat on this rivalry is high in the sky. They have great chemistry in the ring and totally can tell a story. The only thing we can expect on this street match is blood, buckets of blood.

Prediction: This is Pagano´s territory. He wins. 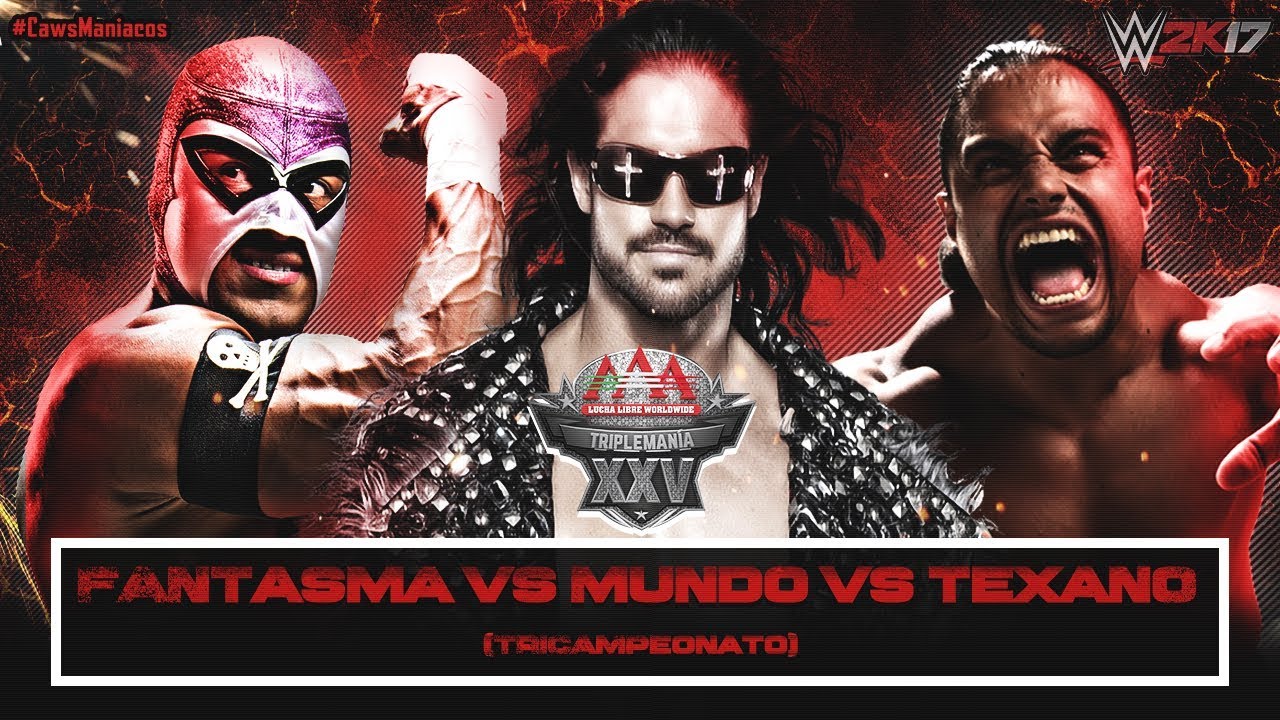 Johnny Mundo has the three most important belts on AAA and he has crossed paths with el Hijo del Fantasma and Texano Jr who have a current rivalry. They are three great luchadores and we can expect a memorable match.

Prediction: Texano Jr. should be the winner. The championships miss him.

“The match of the decade” as AAA has called this match, truly is one of the most awaited encounters, builded over blood and polemics. Dr. Wagner Jr. carries this rivalry as the mature luchador and Psycho Clown is already an iconic luchador of the promotion. This could be more interesting if we can trust there won’t be foreign interventions or a referee trying to steal the show. I really expect a good match if the so called “polemical” factor is out of this.