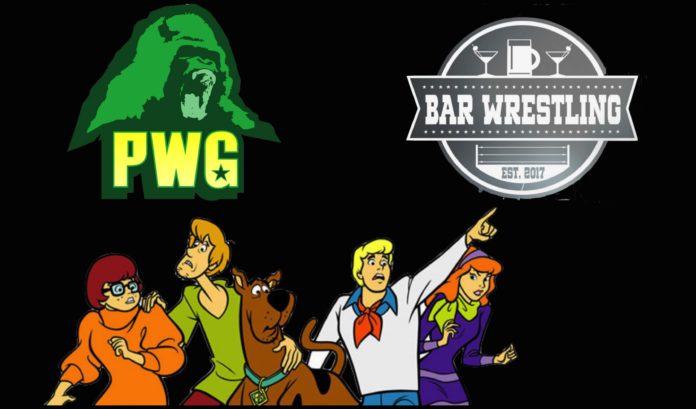 On Monday May 8, the wrestling world exploded in a series of rage, confusion and heartbreak. And no, it wasn’t because of the way Monday Night Raw was booked (this time). It was the seeming subterfuge going on concerning two wrestling promotions, Pro Wrestling Guerrilla (PWG) and a new upstart promotion, Bar Wrestling. Two days later and there are now more questions than answers. Even the most informed wrestling journalists, such as Dave Meltzer, Pro Wrestling Sheet‘s Ryan Satin and PWInsider‘s Mike Johnson remained quiet as an almost air tight secrecy of what actually transpired became increasingly serene.

On Monday night, roughly around 9:15pm, those who followed PWG’s Official Facebook page received this notification:

Naturally, fans of California’s premier indie promotion flocked to the page to see what was going on. What they saw was PWG’s information completely gone and replaced for info about a new promotion, Bar Wrestling, that was holding it’s inaugural event in June 8, exactly one month to the date of the Facebook page “takeover”. Twenty minutes later, it was reverted back to PWG but now was scheduled for deletion, with all posts and content entirely erased.

The internet went into full panic mode, with some wondering if PWG had been hacked or perhaps there was a full on name change coming for the promotion that has been an integral part of the indie wrestling surge since it opened it’s doors in 2003.

@OfficialPWG there's a rumor going around you're changing the name to Bar Wrestling. Probably fake. Hope it's fake. Please be fake.

I see Bar wrestling is getting a warming reception after the PWG facebook page got renamed. pic.twitter.com/vNR2HWaOsb

By May 9, a second PWG Official Facebook page popped up, but with zero “likes” – apparently starting from scratch from the ground up. It’s so far just over 700 likes, compared to the over 20k that it originally had. But the other one was (and is) slated for deletion, with a new page now up with the old one’s handle. Confused yet?

Today, the person who opened the second PWG Facebook account posted this statement on the Facebook page. This person seemingly has no connection to PWG but opened the page quickly in hopes of saving it for anyone from PWG to return and take back over…if PWG still even exists.

Shortly after this was posted, the second page also went down, seemingly because it was deemed a fake by Facebook authorities. As of an hour ago, it was back open and the operator stated they had been returned Admin ownership of the page, but that they were still trying to contact PWG about reclaiming the page.

Meanwhile, Bar Wrestling has not only begun selling tickets for it’s June 8th debut show, but announced a pretty impressive opening night roster, all for only $10.

A quick Google Maps of the location of the event, brings up this majestic venue:

The venue in question is the American Legion Post 241, a small bar that has held wrestling shows in the past. It used to be home for Insane Wrestling League.

But the world of wrestling still has no idea what happened. Rumours began to run rampant. Was it an act of dispute between the three owners of PWG – wrestlers Joey Ryan, Super Dragon and Excalibur – and that one of them is pulling out of PWG? Is Bar Wrestling a co-promotion with PWG and someone merely messed up setting up the Facebook page? Is there a coup happening in PWG and Bar Wrestling is the new direction of the company?

The name change from PWG to Bar Wrestling is official.

Page was hijacked, followers were "stolen"& used for notification,followers, photos, likes were lost, page had to be deleted

My guess is someone who was with PWG had access to the FB page, had a falling out, created Bar Wrestling and changed the PWG page.

According to Rick Knox, Joey Ryan did it on accident trying to copy paste information. Then someone set up a fake PWG Facebook page.

Let’s look at the three owners and try and deduce who could be behind Bar Wrestling and what this could potentially mean.

A true legend for much of the 2000’s, Super Dragon was about as stiff and vicious looking a wrestler as you could hope for without actually killing someone. He hasn’t been seen in a ring since PWG’s Battle of Los Angeles 2015 and most speculate he’s retired due to cumulative injuries from his wrestling career. He seems to be the most day-to-day of the three owners. Could he finally be branching out on his own? With the amount of time, blood and tears he’s put into PWG, it seems unlikely Super Dragon would be the one to suddenly move shop and start over.

Excalibur retired from the ring in 2007 after a seven year ride (due to concussions accumulated throughout his career) and became PWG’s lead play-by-play announcer for their special events. He’s also branched out and done announcing for other promotions, including the Gate Crasher Wrestling event, Joey Janella’s Spring Break, over WrestleMania week. Could Excalibur be looking to escape the limelight that Joey Ryan and Super Dragon shine on the management desk?

The sexiest wrestler in the industry, Joey Ryan has been an unequivocal sex symbol. The purveyor of the penisplex, Joey Ryan has turned comedic wrestling into a true art form, from his genital combat to his reigns as DDT Ironman Heavymetalweight Champion. The strongest rumours are that he has part ownership in Bar Wrestling and that the Support Indy Wrestling twitter account that became the official Bar Wrestling account was run by him. Is it simply a case of Ryan having stakes in both companies and the rumours of his internet ineptitude causing the Facebook confusion? Or was it a rib on the entire internet, an angle to draw attention to his new startup promotion on 30 days notice, using his other promotion as the hackee? The initial card is heavily stacked with members from the Lucha Underground roster, all whom have strong ties to Ryan. And Google Joey Ryan. Seriously. Dude looks guilty as all hell. If one of these three had a hand in this tomfoolery, it’s definitely Joey Ryan. If Facebook had a scratch and sniff section, the PWG page would have smelled like cherry blow pop on Monday night.

SO WHAT REALLY HAPPENED?

That’s just it. No one knows.

None of the three principles in the story – Super Dragon, Excalibur or Joey Ryan – have said one comment, shared one tweet, responded to any baiting, on the entire situation. As noted earlier, none of the other usual news breakers on the web have mentioned anything, not even a speculation. There has been no official announcement from PWG on their website. Bar Wrestling themselves have done nothing but share photos of participants and “like” comments in support of them. The silence is deafening.

The longer the quiet, the more likely it’s an elaborate ruse and that we’ll see PWG making noise very soon – after all, PWG Head Like A Hole is coming up on May 19. It’s like someone has turned Joaquin Phoenix’ breakdown year that ended up being the guerrilla film, I’m Still Here, and turned it into the ultimate kayfabe swerve. It’s like the modern day version of the ECW invasion on Monday Night Raw or the night Scott Hall appeared on Nitro in WCW – is it real? Is this supposed to be happening? What does it mean?

CHIKARA already changed the game with the genius “secret season” this past year (in between Season 16 and 18, the filmed an entire “Lost” season 17, released at once), and last year The Hardys brought an Ed Wood level of cinema into wrestling that felt like home. Perhaps this year, the minds behind PWG just came up with the next great application of social media in pro wrestling – the social media invasion.

PWG has been a fixture and innovator in the professional wrestling world, from booking to scouting, for 14 years now. Here’s hoping the jokes on us and they’re around for a hundred more.

Special thanks to partner sleuths Blake Hellheart and Rick James for the assistance in gathering evidence.