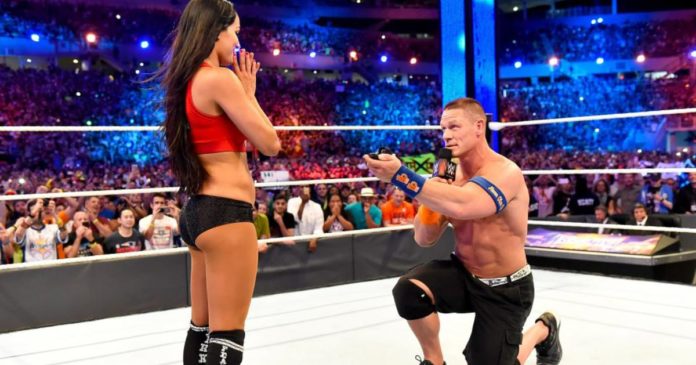 A couples months back, we had a look at 15 pro wrestling weddings that are memorable highlights of the pro wrestling industry. These were all kayfabe marriages that advanced storylines and gate sales (with some couples being real and some imagined). But the current wrestling landscape has never been dominated by so many power couples – either married or dating – from the WWE to the indie circuit.

So who are today’s power couples? Who are the pairings – either through matrimony, influence, or simply power of association – that hold the most sway on the industry? Here’s all 45 couples ranked in order of power in today’s wrestling world, Last Word on Pro Wrestling’s Soap Opera Digest ranking of love in a squared circle world.

She just left years of service in ROH to become a free agent. Expect her to end up in WWE’s Women’s Tournament. He is an indie star in the American North East and Ontario, Canada (who’s done backstage work for WWE).

She won the last installment of Tough Enough but was recently released after she became pregnant. He’s a former NXT Tag Team Champion who’s fallen from grace.

He’s a former WWE Cruiserweight Champion and WWE Superstar. She’s one of the indie’s most demented and intriguing characters.

He’s quite possibly the most hated commentator in the history of the industry. She’s a former 5-time Knockouts Champion and part of Impact Wrestling creative.

He’s finally found his groove in NXT after lighting the world on fire as La Sombra. She’s an NXT trainer who blazed trails as a women’s wrestler in the independents as the Dark Angel.

He’s the Unbreakable contender for the IWGP Intercontinental Championship in NJPW and former ROH World Champion. She’s an indie women’s legend who’s done time with ROH, Shimmer and in Japan.

He’s a former indie icon and WWE Champion. She’s a former WWE Divas Champion and beloved IWC icon. Only reason they aren’t higher is because neither have expressed any interest in being apart of the industry anymore. The Bonnie & Clyde of pro wrestling.

She’s one of the most beloved women in WWE history and current Raw Women’s Champion. He’s an indie standout who’s appeared for NXT, 205 Live and was an alternate for the WWE Cruiserweight Classic.

He’s the King of Dong Style and the master of the Penisplex. She’s an indie sensation who works magic with her Vaginaplex. A match made in heaven.

He’s the current WWE Universal Champion and legitimate badass. She’s a former WWE Women’s Champion and one of the most popular female stars of all time.

He’s the James Brown of indie wrestling and legit indie icon. She’s a pioneer on the women’s indie circuit that is rebuilding her legacy. The Mickey and Mallory of wrestling.

He’s a Jersey loudmouth with a gift for shuffling feet and words to win over the crowd. She’s a Jersey girl who’s love for the craft becomes more evident each match.

He’s the Swiss Superstar and the name on the marquee lights for the Cesaro Section. She’s an absolute history maker for women’s independent wrestling for the past decade and trainer at the WWE Performance Center and producer for Live Events.

He’s one half of one of wrestling’s best tag teams of the last decade (ROH’s War Machine) and soon to be free agent. She’s a recent signee to NXT waiting to unleash her madness.

He’s a multifaceted asset who never seems to get a break. She’s a former fitness athlete ready to make her move.

He’s the indie darling who revolutionized aerial combat with old school storytelling. She’s the badass who put a bite back into the UK women’s scene.

He’s the indie tag team legend determined to stake his claim before riding off into the sunset. She’s a 6-time Knockouts Champion determined to leave the industry a better place than when she arrived.

He’s the ultimate overachiever because the internet loves his smile. She’s a dual role star with both Impact Wrestling (Laurel Van Ness) and on the indies. Wait. What happened to Emma? I LIKED EMMA.

He’s a Bully (not in the JBL sense) on one last surge in the indies. She’s one of The Beautiful People.

He’s Johnny Wrestling. She took a FREAKING THUMBTACK BOOT TO THE FACE.

She’s one of the industry’s most decorated Women’s Champions, back in the WWE. He’s a UK legend about to return to Impact Wrestling.

She’s the Queen of the Feline. He’s the most sympathetic husband ever.

He may have just retired, but anything these two ask for, they’ll get.

Same as #13 but he retired earlier.

Best wrestling wedding in years. Impact better keep them or WWE will use their love for more money.

The Sid and Nancy of wrestling. They’ll be booked just for the carny factor.

He’s a Bulgarian Brute ready to re-establish his legacy of brutality. She’s a former suit ready to show she’s ready to join the workforce.

He’s back in control of the zone he initiated. She’s ready to make sure his words are heard.

He’s the grandson of a plumber, showing the Universe he was more than Stardust in the wind. She’s ready to take it to the extreme that her passion outweighs her ability, but she’ll face every a-tack as they come.

He’s become the most interesting Hardy for the first time ever. She’s the muscle.

He’s an indie legend and hero of WWE mythology. She’s the Bella we liked.

He’s the Skill Saw guy with the mouth for war. She’s Renee Paquette. And the couple we’re all most jealous of.

Since his wife arrived, he’s shown that working with your wife isn’t only possible, it’s AWESOME.

Seriously. Who’s going to say no to these two?

Together, from NXT to the Network tournaments, they’re changing WWE’s philosophy for the better and making a food chain much like Mother Nature’s – it may not be fair, but in the end, all of life is better by its structure.

BUT WAIT! WHO’S THAT UNDER THE HOOD!

Seriously. One controls WWE and the mainstream pulse of wrestling and ones in the White House. #pwned #itwasmeallalong

This article is for satirical purposes.